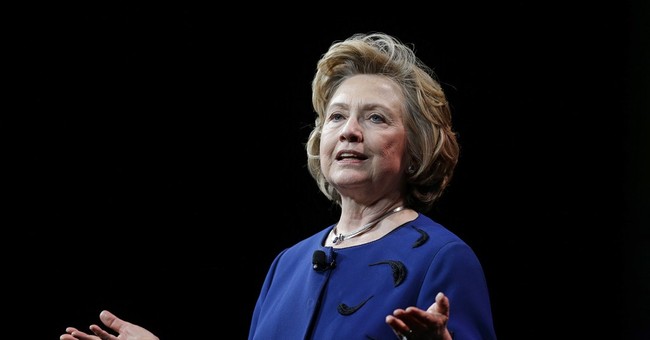 Run as hard as you can for president.

Play hardball to get your party's nomination.

Do whatever dirty party tricks it takes to knock off what's-her-name up in Massachusetts, or what's-his-name out in Montana.

Compared to you, they're a pair of minor league batboys - two lefty Democrats who can't hit to every field or duck Monica Lewinsky fastballs like you can.

Turn it on, Hillary. Spend a billion dollars trying to get your own key to the Oval Office.

Crank out two or three more books about all those hard choices you had to make when you were a secretary of state, a U.S. senator and the starving wife of public-servant-in-chief Bill Clinton.

Appear on TV with Diane Sawyer every Monday. Use Bill to seduce the big campaign contributors.

Deploy Chelsea to explain to the families of those who died at Benghazi why, now that it matters to your future plans, you really do care about what happened there.

And if anyone in your party thinks you're too old, too aloof or too close to Wall Street to win the general election in 2016, sic that old attack dog Carville on them.

In case I haven't made myself clear, Hillary, I want you to run for president.

I don't want any organization on my side of the aisle to oppose your nomination by the Democrats. In fact, maybe I'll see if I can get the GOP to help you win it.

I want to see you take the mound for the Democrats in 2016 and face whomever the Republican Party puts up to bat against you.

I don't know who that'll be, but it won't matter. The GOP has its deepest bench in a long time.

It's got half a dozen governors whose states are doing well - Walker in Wisconsin, Kasich in Ohio, Daniels in Indiana, Jindal in Louisiana, Christie in New Jersey, Perry in Texas.

Plus there's ex-governor of Florida Jeb Bush, probably the best and brightest of them all.

They're all executives. They all have real-world experience in governing. The GOP can nominate any one of them by pulling his name out of a hat and he'd be more qualified to be president than you, Hillary.

Let's face it, Hillary. You've never excelled at anything except being an activist in college and standing by your man Bill.

You have no issue to run on, except that you're a woman. And the only thing you have going for you is that you're still married to Bill and everyone loves and adores him now that he is powerless.

Hillary, you don't even have the demeanor or the personality to be president. Did you see yourself in that Diane Sawyer interview?

Do you think anyone wants an in-your-face person like you to be president? Someone who acts like an arrogant ass - "I'm Hillary Clinton and I want to do what I want to do and so I'm going to do it."

"And by the way, Diane, did I ever tell you how hard Bill and I worked as public servants? And how dirt poor we were when we left the White House?"

So, seriously. I repeat. "Please, Hillary. Run." And to the Democrat Party, I say, "Please nominate her."

In fact, let's make it official.

"I, Michael Reagan, hereby endorse Hillary Rodham Clinton to be the 2016 presidential nominee of the Democrat Party."

And Hillary, if you run, I even promise you this. I will vote for you as many times as possible in the 2016 California primary.