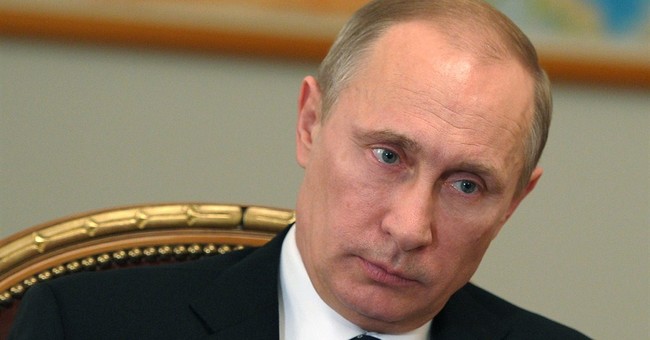 Mr. Putin's quick takeover of the Crimean peninsula was no surprise to me.

Neither was the Obama administration's half-butted reaction on Tuesday.

Secretary of Defense Chuck Hagel announced that to show our support for Poland and the Baltic states after Russia's intervention in Ukraine, the we will train more Polish pilots and expand our role in NATO's air policing mission over their territories.

I'm sure Comrade Putin is quaking in his combat boots.

To show he really meant business, Hagel went to the old Cold War playbook and pulled out some high-minded rhetoric about it being time "for all of us to stand with the Ukrainian people in support of their territorial integrity and sovereignty."

That sounded real nice, Chuck. The trouble is, it's too late for Ukraine and its people. It's been too late for a long time.

Unless we want to start World War III, Putin is going to do whatever he wants in the Crimea.

It was only a matter of time before Putin took off his Olympic ski mask and cracked down on Ukraine's freedom movement the way his imperialist forefathers in the Kremlin would have during the Cold War.

The United States has been showing Putin how little we care about what he does to the citizens of the former Soviet Union since 2008.

After Putin's quick intervention in Georgia - Mikhail Gorbachev's former Soviet Georgia, not Jimmy Carter's Georgia -- the Bush administration pretended it was going to do something really tough.

Dick Cheney rattled a few sabers and said Putin's use of military force to snuff out Georgia's freely elected pro-Western government would not go unanswered.

If Putin didn't give Georgia back its autonomy, Cheney warned, there'd be serious consequences for Russia's relations with the United States.

Of course, nothing happened. Russia did what it wanted and the Free World moved on. Georgia is an occupied country today, just as Ukraine will be one tomorrow.

The Obama administration has been soft on putinism too.

In 2009 the president's team cancelled the missile defense system the United States had been planning to set up in Poland and the Czech Republic.

We wanted to protect Europe from Iranian missile strikes, but Putin thought we were disrespecting him and threatening his Mother Russia. He put up a fuss and we caved, again showing Putin how tough we really weren't.

The Obama administration can't - and shouldn't - do anything militarily about Ukraine. But it can do more than just talk tough and cancel some military exercises with Russia.

I suggest that President Obama might want to study how Ronald Reagan defeated the Soviet Union.

He did it without firing a shot, as we know, but he had a super weapon - oil.

Oil was the only thing the Soviets had in the 1980s that anyone in the rest of the world wanted to buy, besides ICBMs and H-bombs, and they weren't for sale.

Since selling oil was the source of the Kremlin's wealth, my father got the Saudis to flood the market with cheap oil.

Lower oil prices devalued the ruble, causing the USSR to go bankrupt, which led to perestroika and Mikhail Gorbachev and the collapse of the Soviet Empire.

The Soviet Union was so destitute, so unable to pay for anything from the West in the 1980s, it was pathetic.

"How bad was it?" I once asked Mr. Gorbachev at a town meeting.

He said his country was so broke its women couldn't get pantyhose. The women of the USSR were so livid, Gorbachev said, he was forced to appoint a Czar of Pantyhose to bring pantyhose into the country.

My father had powerful allies on his team - Maggie Thatcher, Pope John Paul II, Vaclav Havel and Lech Walesa. All poor Obama has is the UK's David Cameron.

But if our president is really serious about getting Putin to lay off Ukraine and think twice about rebuilding the Soviet Empire, he should follow the Reagan Rule.

He should put the economic screws to Mother Russia and bankrupt her until she starts clamoring for pantyhose.