Take Aim at the Real Enemy 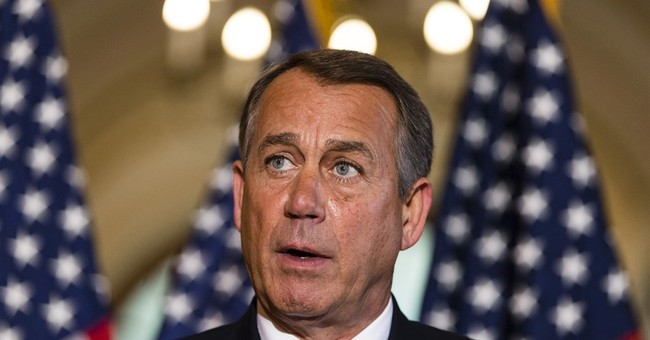 While we watch the S.S. Obamacare sink beneath the waves, and while we watch the White House explain why its signature legislative "achievement" is not the titanic disaster we all knew it would be, I have some advice for my fellow Republicans.

Quit shooting Cruz missiles at each other.

And take aim at the real enemy -- the Democrats and their awful agenda for America.

We can't blame John McCain, Lindsey Graham and the other anti-Ted Cruz senators for what they said or did during the government shutdown.

What they thought about defunding or delaying Obamacare -- or what they said to the media -- was irrelevant.

The only thing that really mattered was how those senators would have voted on the bills the House of Representatives sent over to the Senate.

And we can't blame them for not successfully defunding Obamacare when Harry Reid never even gave them a chance to vote on anything.

I'm not happy with McCain, Graham and a lot of other Republican senators in Washington who often speak and act like they've received brain transplants from members of The New York Times editorial board.

But I'm still 100 times happier with our least-conservative Republican senator than I would be with any Democrat that's out there.

Whatever their faults, McCain and the others saw the reality written on the wall. They knew Reid wasn't going to bring anything up for a vote that would jeopardize Obamacare. And they knew if he did, President Obama quickly would have vetoed it.

In the Republican House, it was the same story. Majority Leader John Boehner was blasted by conservatives but he did his best.

When he tried to explain the facts of life to the Tea Partiers in his caucus, they didn't believe him. Yet after that, Boehner still did everything the Republican suicide caucus asked him to do.

Everything Republicans have been saying about the dangers of Obamacare is right, but we can't keep attacking our own people.

The GOP is not big enough. We've always been a minority party. We can't afford to keep throwing our fellow Republicans under the bus, when we should be figuring out how to put more people on the Republican bus.

We Republicans need to wise up. We need to dismiss our circular political firing squad, get in a straight line, take aim at the real enemy and start blasting away.

We need to replace Reid, Chuck Schumer and every Democrat senator we can. Fighting among ourselves is not getting the GOP anywhere. Look at the last election.

The Tea Party sent up conservative candidates in primaries in Indiana, Nevada and Connecticut who beat Republican incumbents but then lost in the general elections. One of them was an ex-witch.

Now there's a real long-term winning strategy for the GOP.

If it's going to primary a Republican senator they think is insufficiently conservative, the Tea Party wing has to make sure its candidates can win in the fall elections.

Otherwise it's just being really stupid -- and we end up with a Democrat Senate and unstoppable legislative monstrosities like the Affordable Care Act.

If Republicans really want to change things for the better, if we really want to save America from the Democrats and Obamacare, we have to win back the Senate.

To do that, Republicans need to quit fighting each other, call off their civil war and start fighting the real enemy of freedom -- the Democrat Party.

The political reality is simple: The 2013 Senate is run by the Democrats. Harry Reid never brings up a vote that he disagrees with. And until Republicans take control of the Senate, nothing will change.

So don't blame Boehner or McCain -- or any of the Republicans in the House or Senate -- for the Obamacare fiasco. Blame Obama and the Democrats. And replace them.