A Lost Message and a Lost Opportunity 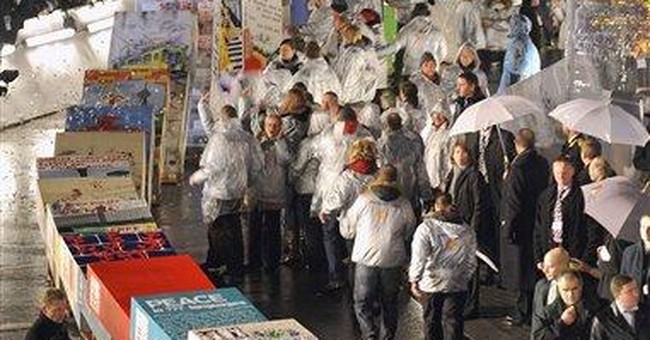 This past week I have been in Europe to help commemorate the 20th anniversary of the fall of the Berlin Wall. I went into this trip with a great deal of enthusiasm and an expectation that the heroes responsible for that momentous event be justly recognized. Sadly, I was instead reminded of how much we have willingly forgotten.

Over the past several months, the Reagan Legacy Foundation has been working hard to ensure that Berliners remember the vital role my father played in bringing down the wall and defeating communism. Amazingly, there are no major statues, memorials or tributes to Ronald Reagan -- the president, the man who sided with freedom over tyranny. Thankfully, in partnering with the "Checkpoint Charlie" museum, we have now unveiled a Ronald Reagan permanent exhibit to help educate Berliners and their international guests of what would have been an unpardonable omission in modern historical analysis of that period.

During these ceremonies I fully expected the legends of this period to be honored.to at least be mentioned. But over the course of this celebration that included fireworks and a re-enactment of the fall of the wall, I heard nary a mention of Ronald Reagan or Margaret Thatcher. This was both frustrating and alarming.

One only has to review modern education textbooks to see that this omission is not limited to an important celebration on a cold Berlin night. Rather, it is a trend -- a trend that is removing the reference of the great heroes and leaders of the Cold War battle and replacing it with a softer, perhaps less controversial revision.

Last year, a German study revealed how disturbingly little German youths understand about their divided history just a generation back. Two-thirds of the schoolchildren surveyed did not believe East Germans lived under a dictatorship. Nearly as many thought the East German economic system was preferable to West German's. Communism, preferable?!

When we allow such a travesty, we disregard not only who the heroes were, but that there was ever any need for heroism at all. The Berlin Wall did not simply divide a city. The focus of Monday's celebrations should have been life and freedom, not unity.

The facts are what they are. We cannot and must not forget that the Soviet Union murdered and oppressed millions of people before, during and after World War II in an effort to conquer more territories, gain more resources and grab more power. And while the world trembled, a select few leaders of that era finally took a stand in defense of freedom-loving people who lived under separate and distinct flags.

Germans are not the only ones who have forgotten. This lazy softening of history is equally a problem in our American classrooms. According to the National Assessment of Educational Progress, American students test worse in history than they do in any other subject. A survey in 2007 concluded fully a third of 17-year-old American students did not know that the Bill of Rights guarantees our freedoms of religion and speech.

These are the principles our nation's veterans have fought and died for over the centuries, on our own soil and across an ocean, in places like Germany. These are the principles for which men and women like Ronald Reagan and Margaret Thatcher made such courageous stands. This is the bedrock of who are, who we have been, and who we must remain in the future.

Thomas Jefferson told us, "Enlighten the people generally, and tyranny and oppression of body and mind will vanish like evil spirits at the dawn of day."

I was proud to stand there and remember the fall of that terrible Wall. But until we remember in full, we leave ourselves open and vulnerable to the seditious creep of socialism, communism, and oppression.