Messages From Massachusetts: The Meaning of Scott Brown 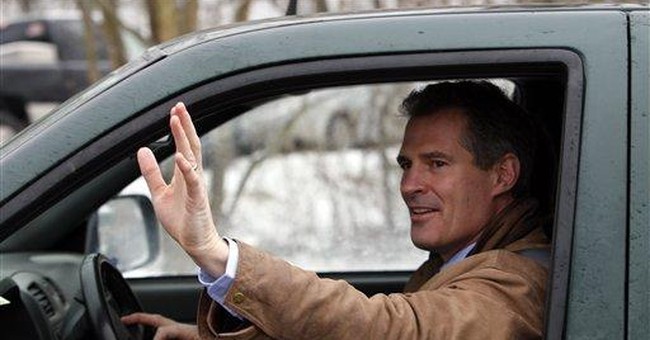 By the time you’re reading this piece, the world will know whether Republican Scott Brown defeated heavily-favored Democrat Martha Coakley in Tuesdays all-important special election in Massachusetts. Even if the GOP challenger falls short in his bid to bring off one of the most significant political miracles of recent years, the unexpectedly close nature of the race in the Bay State conveys important messages to all Americans who care about the nation’s political future.

1. Ballots matter more than demonstrations, petitions, community organizing or media commentary. The Scott Brown campaign echoes another wintry New England election from 42 years ago. On March 12th, 1968 a little known Minnesota Senator named Eugene McCarthy managed a shockingly strong showing in the New Hampshire Primary against the entrenched, all-powerful Democratic incumbent, Lyndon B. Johnson. McCarthy actually lost (by a margin of 49% to 42%) but his impressive vote total drew Bobby Kennedy into the race, ultimately forcing LBJs withdrawal. Most importantly, McCarthy’s New Hampshire campaign gave mainstream recognition to the anti-Vietnam war movement for the first time. A faction that drew that kind of support in a relatively conservative state, against a President who had won a crushing, coast-to-coast landslide victory less than four years before, suddenly drew media and public respect. Peace activists had been staging major demonstrations, teach-ins and even draft resistance for more than two years, but after this election, New Hampshire administration supporters could no longer deride the Vietnam protesters as an irrelevant fringe, representing a small fraction of the public. The ballots in the Granite State showed the political potency of sentiment previously derided as extreme and irresponsible.

In the same way, the Massachusetts election of 2010 proves that impassioned resistance to Obamacare and runaway spending and the inexorable growth in government represents a powerful, perhaps unstoppable movement that promises to upend all conventional political calculations. Leaders of the liberal establishment love to deride the Tea Party activists and other engaged conservatives as kooks and radicals with no mainstream appeal. The balloting in Massachusetts tells a completely different story. Public opinion polling, and big turnouts for rallies and protests, help send the message that ordinary Americans feel angry and resentful about the direction of the Obama administration and the Democrats in Congress. But the startling vote totals for Scott Brown send the only kind of message that matters to professional politicians: they not only must cope with indignant constituents, but with the likely loss of their jobs unless they pay attention the changed mood of the American public. The voters in Massachusetts brought new clout and influence and legitimacy that only ballots can confer.

2. With huge issues at stake, feuding conservatives can put aside their differences and make common cause. Ever since John McCain won the decisive primaries that earned him the Republican nomination in 2008, mainstream media gleefully promoted blood-curdling tales of the bitter, unbridgeable divisions in the Republican Party. Newsweek, for instance, ran a cover story with the headline “There Will Be Blood” about the angry conservative voices (Dobson, Coulter, Limbaugh, Hannity) who loathed McCain and indicated they would never support him. Never mind the fact that all of these critics came around to supporting the GOP ticket after the selection of Sarah Palin - or the even more salient fact that McCain drew an impressive 78% of all Americans who described themselves as conservative in exit polls (some 34% of all voters). In fact, McCain drew very similar backing among self-described conservatives to George W. Bush in 2000 (though that year saw sharply lower conservative turnout) and 2004 (with virtually identical conservative turnout to 2008). In 1996 and 1992, Bob Dole and the first president Bush fared far worse among conservatives winning only 72 and 64% of their votes, respectively, indicating far more damaging party divisions than in recent years. Despite the misleading conclusions of the conventional wisdom, conservatives and Republicans were surprisingly united and mobilized in 2008 and lost the election because of Barack Obama’s huge win among independents and moderates. In Massachusetts, those independents have moved decisively toward Scott Brown and the GOP, and away from support for the Obama agenda. Moreover, the extremism and militancy that establishment pundits imputed to Tea Party participants and other patriotic activists never materialized in Massachusetts. Even though Scott Brown was relatively moderate on some social issues (making no pledge to disturb gay marriage in the Bay State, supporting a ban on partial birth abortion and a requirement for parental notification, but demanding no overall prohibition on abortion in general) he drew the support of a surprisingly united party and most of the local Tea Party activists. They understood that Browns firm opposition to Obamacare, stimulus spending, cap-and-tax, suicidal deficits and other abominations trumped any shortcomings on his ideological score card. In view of the desperate need to deny Harry Reid his crucial 60th vote in the Senate, conservatives rallied on behalf of practicality above purity. Barack Obama’s menacing, radical leadership achieved something that no Republican leader since Reagan has managed to accomplish: uniting conservatives and moderates, Republicans and independents, in opposition to the frightening Democratic agenda.

3. Third party bids amount to nothing more than embarrassing, destructive distractions. At one point, the libertarian independent candidate Joseph Kennedy (no relation to the famous Kennedy clan) was expected to draw hundreds of thousands of votes in the Massachusetts Senate race; early polling showed him capturing as much as 15% of the electorate. When conservatives and other Obama opponents realized, however, that Scott Brown offered a real chance of victory, Kennedy’s support quickly (and very appropriately) melted away. The same phenomenon applied in New Jersey in 2009, where independent candidate (and former Republican) Christopher Daggett at one point passed 20% in the polls, but drew only 5.8% of the vote on Election Day - not nearly enough to deny victory to the triumphant GOP candidate, Chris Christie. Considering the final numbers for Kennedy (and nearly all fringe party candidates in major races) it’s hard to argue that the small percentage of votes cast for him advanced his ideas (immediate withdrawal from Afghanistan, abolition of the Federal Reserve) in any way. If Massachusetts voters wanted to send a message about their opposition to the Obama agenda they could do so by contributing their votes to a big showing for Scott Brown, but how would it make a scrap of difference if Kennedy got 4% instead of 2%? The only real influence of third party eccentrics is to defeat the candidates with whom they most closely agree by drawing votes away from a conservative-oriented (or liberal-oriented) coalition. The Massachusetts race (where Democrat Coakley insisted on Kennedy’s participation in the debates, and clearly attempted to boost his campaign in the final weeks) made clear the ancient and obvious lesson that conservative fringe candidates hurt serious conservative contenders, just as liberal fringe candidates (Ralph Nader, anyone?) hurt viable liberal candidates.

4. Elections are ultimately about sending messages, more than they depend on personality or political tactics. If Scott Brown manages to complete his Massachusetts Miracle, Obama apologists will try to diminish the national implications of the upset by pointing out that the GOP nominee was a more effective campaigner than Coakley, or a more likeable personality, or a better communicator on TV (absolutely true in all cases). In the same way, they tried to diminish Reagan’s significance by explaining his success in terms of his undeniable charm and skill as the Great Communicator, suggesting that he won because of affability rather than ideas. In fact, the results of high profile, furiously fought campaigns usually reflect the deep-seated sentiments of the electorate far more than they stem from candidate charisma or effective get-out-the-vote efforts. In 2008, Americans wanted a sharp, decisive change from the leadership of George W. Bush, and Obama offered a more credible new direction than John McCain. If Scott Brown captures Ted Kennedy’s Senate seat (held by the Kennedy family and their close associates since 1952!) in the nation’s most monochromatically Democratic state, it will signal a fervent desire for another sharp, decisive change in direction. That’s especially true after the President’s last-minute trip to rally his dispirited forces and to save Martha Coakley’s flagging campaign. The message from the voters won’t be that the public has developed a fervent new love affair with the GOP but rather that they loathe the reckless spending and ongoing corruption exemplified by Obama, Pelosi and Reid.

To give some sense of the powerful tides of the history and tradition Scott Brown must overcome to win this race, the last time a Republican held this particular Senate seat, his name was Henry Cabot Lodge, the grandson of a previous Massachusetts Senator of the same name. The younger Lodge won his first Senate race in 1936 -- during the height of Franklin D. Roosevelt’s appalling mismanagement of the Great Depression. In that race, Lodge walloped the spectacularly corrupt Democratic Mayor of Boston, James Michael Curley. (Curley was once elected to the Board of Aldermen from a jail cell, and his fourth term as Mayor was interrupted by five months in federal prison for mail fraud, but that’s another story). As a long-serving officer in the Army reserve, Henry Cabot Lodge fought in North Africa with a tank unit and ultimately rose to the rank of Lieutenant Colonel - the same rank Scott Brown achieved during his thirty years of service in the Massachusetts National Guard. During his distinguished career, Senator Lodge also served as Dwight Eisenhower’s campaign manger when he won the presidency in 1952, and became Nixon’s running mate in his razor-thin loss to John Kennedy in 1960.

In any event, if Scott Brown captures the Senate race on Tuesday he’ll make some significant history and send some potent messages, while taking over a seat whose most recent long-term occupants included a President of the United States (JFK), a powerful presidential contender (Teddy) and a universally admired Vice Presidential nominee (Lodge).

Any wonder that the whole political universe remains focused on the fateful battle in Massachusetts?

Like those skirmishes in the Boston suburbs of Lexington and Concord some 235 years ago, this new, against-the-odds uprising to challenge a corrupt political establishment may yet amount to a political shot heard ‘round the world.