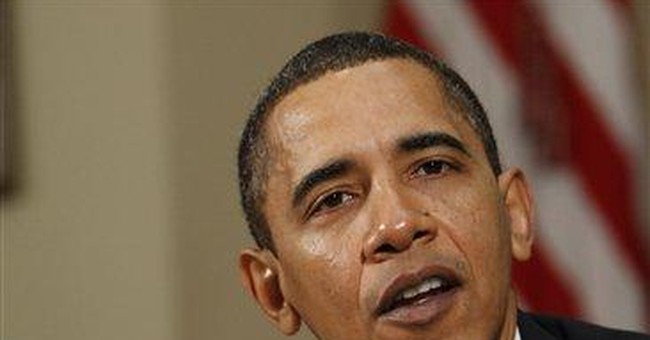 Signs of Republican revival in Tuesday’s election will leave some conservatives cheering, and others sneering; cynics insist that it doesn’t matter which half of the two-party power structure controls the levers of power. This world-weary lament has become familiar to anyone who listens to the angry callers who often jam the lines on talk radio. The conventional complaint suggests that Republicans came to power in 1994 with grand promises and great hopes, but proceeded to abandon their principles and to betray their base. Even after the Bush election in 2000, with complete control of all branches of government, they achieved nothing – displaying the same corrupt, free-spending, budget-busting tendencies that they decry in the Democrats now. According to the arguments of disillusioned defeatists, a GOP takeover of Congress in 2010 (or even of the presidency in 2012) will do nothing to stop the march toward socialism, globalism and apocalypse.

This smug summary of past, present and future sounds informed and sophisticated but it actually distorts and ignores several aspects of recent history. Obviously, Republican leadership fell short in many ways (enabling the Dems to score big wins in 2006 and 2008) but on balance the real record gives more reason for pride and hope than for regret and despair.

* The Gingrich Revolution of 1994 failed to realize all its goals (like every other political movement) but still managed to achieve its most important priority: cutting the deficit and bringing the budget into balance. When Newt and his conservative cadres took control of both Houses of Congress, the federal deficit stood at 2.87% of the Gross Domestic Product. (It had reached all the way to 4.58% in the worst year for the first President Bush –1992). The deficit fell steadily for the next six years, culminating in a federal surplus of 2.41% in 2000. Bill Clinton claims credit for this achievement, of course, but it was actually the Republicans who fought ferociously to bring new restraints to wasteful federal spending: Gingrich and company even defied polls and precedent to bring about a partial government shutdown in 1995. They eventually compromised with Clinton, but their focus and pressure on the Democratic president brought historic progress in reducing federal red ink.

* The Republican Revolutionaries also succeeded in their second top domestic priority: welfare reform. With two prior attempts vetoed by Clinton, they passed “The Personal Responsibility and Work Opportunity Reconciliation Act” in the election year of 1996 and the president felt compelled to sign it. The radical reform not only eliminated welfare as a federal entitlement, but required recipients to begin working after two years of benefits and imposed a five year lifetime limit on drawing benefits from Washington. The bill also eliminated welfare for non-citizen immigrants (both legal and illegal) while limiting eligibility for unmarried mothers below age 18. Though decried by Democrats (of course), the sweeping restructuring of the welfare state worked far better than even its backers had predicted, cutting the welfare rolls by more than half within three years. In the year 2000, federal figures showed a decline of 53% in the number of individuals receiving benefits, together with an overall reduction in the rate of poverty. The Republicans deserve credit for the fateful transformation: over passionate objections by most Democrats and nearly all liberals, they shifted literally millions of Americans from dependence and idleness to productive labor.

* Critics of Republican rule may grudgingly acknowledge some of the achievements of the “Contract with America” Congresses but insist that in the era of George W. Bush the GOP lost its way. With Republicans finally in control of both houses of Congress and the White House for the first time in fifty years (since Eisenhower’s first term, in fact) they allegedly blew their big chance to achieve great things and squandered their precious mandate in the process. This ubiquitous argument ignores the unpleasant realities of the election that brought Bush to the White House: he had no mandate at all, having lost the popular vote by 444,000 votes to Al Gore and won the Electoral College under circumstances that many Americans never accepted. What’s more, the GOP lost seats in both houses of Congress in November of 2000 and controlled only 50 Senators (in a flat-out tie with Democrats) and 221 members of the House. To put these numbers in perspective, President Obama and his party today control 35 more House seats and 10 more Senate seats than the Republicans did when President Bush took command. These shaky majorities don’t excuse W.’s mistakes but they do make his successes all the more remarkable: in a situation where the defection of a single Senator or just four House members would tilt either chamber to the Democrats, Bush still managed to push through major tax cuts (slashing rates across the board) and his signature “No Child Left Behind” education bill (for better and worse). Less than five months after the beginning of the Bush first term, however, Senator James (“Jumpin’ Jim”) Jeffords of Vermont switched his allegiance to the Democrats, giving them control of the Senate and making Tom Daschle majority leader. It’s true that the President’s personal popularity (particularly following the attacks of 9/11) helped him gain Congressional seats in both of the next two election cycles but Republicans never controlled more than 232 House seats and 55 seats in the Senate. As a point of reference, Jimmy Carter (who no one remembers as a potent, accomplished party leader credited with dazzling achievements) came to office with 292 House seats (!) and 61 Democratic Senators. Yes, President Bush should have used his veto pen more frequently and aggressively to fight back against irresponsible Congressional spending, but it’s simply inaccurate to say that he and the Republicans in Congress wasted their moment of great power, since their actual power never counted as that great. Without the cooperation of a handful of unreliable GOP moderates in both House and Senate, the Republicans would have lost (and ultimately did lose) their fragile majorities.

* In this context, the Bush record looks bold, and perhaps even foolhardy. He famously grabbed the notorious “third rail” of American politics and tried valiantly (but unsuccessfully) to give his fellow citizens more personal control of the money they poured into the Social Security system. In 2007, even after losing his Congressional majorities, he fought for a sweeping, free-market health care reform to expand Health Savings Accounts and create a new personal health insurance tax exemption. Earlier, he succeeded in passing two rounds of major tax cuts, appointing and confirming two brilliant Constitutionalists for the Supreme Court, enacting a ban on partial birth abortion, getting rid of useless firearms restrictions, and keeping the budget under relative control (despite the perpetual Congressional appetite for pork). The worst year for Bush deficits came in 2004 (3.53% of GDP) but still amounted to far less than the dangerous spending under all four years of his father’s presidency or five of eight years of President Reagan (who ran deficits of nearly 5% from 1983-86). What’s more, George W. Bush had begun to restore fiscal sanity (with deficits of 1.88% in 2006, and 1.16% in 2007) before the recession brought his concluding number up to 3.21%. Now, in Obama’s first year, the deficit amounts to more than 10% of the GDP – three times the rate of Bush at his absolute worst. What’s more, there’s no prediction or possibility of serious cuts in that deficit for the next eight years.

An honest examination of recent politics shows plenty of examples of GOP hypocrisy, blundering, and sheer cluelessness, but the oft-repeated claim that the Republican record is indistinguishable from that of the Democrats is unsupportable. Naturally, some of the most ardent GOP partisans felt disappointed by the mixed results following great victories in ’94 or 2004, but that’s a factor for every faction in U.S. politics. Listen to some heartbroken liberals express their sense of betrayal at the empty list of Obama accomplishments in his first ten months!

GOP victories, in off year elections like those on Tuesday, and especially in the fateful Congressional elections of 2010, can save the country from Obama’s most radical and destructive schemes. Imagine how the dynamics in Washington would change if voters cut down the Democratic majorities to equal W’s skimpy majorities in 2001! Or better yet, why not dream of gains like ’94 (54 House seats) and ’80 (12 Senate seats) that would put Republicans back in control of both houses?

Given the imperfections of individual leaders and the contradictions even within a preferable party, this sort of sweeping GOP success wouldn’t bring a messianic age, or turn political Washington into the “best of all possible worlds.” There would still be disappointment, duplicity and stupidity but there would also be a more conservative and constructive tone. In building for more triumphs for the Grand Old Party, its members should never allow the impossibility of “best” to mask the desirability of “better.”