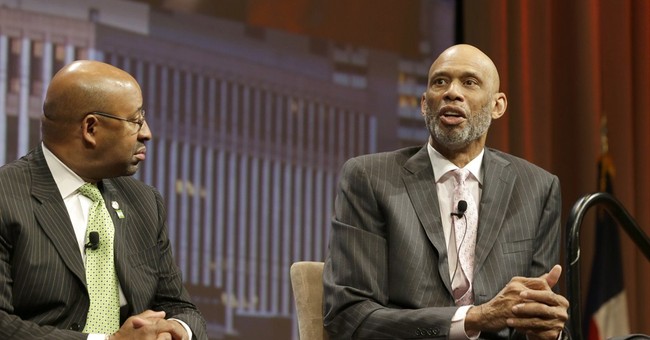 Back in the day I had two posters of Kareem in my room. I loved watching him frustrate his opponents with a game they couldn't quite figure out. After reading his most recent Time Magazine op-ed on the Baltimore riots, I'm a frustrated opponent, totally unable to quite figure out what he's talking about.

The article's title is "Baltimore is just the Beginning" and in it Abdul-Jabbar makes several points. He asserts that the riots "civil unrest" in Baltimore is about much more than Freddy Gray's death. Combining the killing of blacks by police with economic frustration, he compared the city's response to that of those involved in the Boston tea party.

He does distinguish between the protestors and the rioters, calling the latter criminals and calling for their prosecution, which is good. Adding that they hurt the cause of the protestors, he concludes by saying that not only has there been a long history of black protests in the country, but that all the significant change the country has experienced was the result of passionate protesting.

Unfortunately, there are a handful of shots NBA All-Time Scoring Leader makes during the article, that to use the phrase "air ball" to describe them would be extremely generous.

Firstly, he mentions the regrettable statistic of 70+ deaths of unarmed blacks at the hands of police officers since 1999 around the country. One important death statistic he doesn't mention is that there have been 82 homicides since the beginning of the year, in Baltimore alone. Any Google search of Baltimore shows it has been consistently one of the most violent and lethal cities in the country, for decades.

He then considers the horribly dreadful economic circumstances of the city, calling it "the key to understanding the anguish of the protestors in Baltimore." There's no question about the crushing effects a lack of opportunity has on a populace, but Abdul-Jabbar's identification of the responsibility for its existence misses the mark by a mile.

As has been pointed out elsewhere ever since the riots, Democrat politicians and their policies have dominated Baltimore for almost 50 years. Like Detroit, it's a veritable control petri-dish for analyzing the results of lock-step leftist domination of a city. The last Republican mayor was in 1967 and the last non-Democrat President of the City Council was in the mid-1950s.

The results of those policies are crystal clear. They've miserably failed. There are no jobs, no opportunity, a hideous education system, and no hint of changing.

But Abdul-Jabbar doesn't even come close to mentioning this. Instead, he says "How long can you politely ask for someone to throw you a lifeline before the sand swallows you whole?", as if the residents haven't been getting the precise leadership for which they've been voting.

Brutal truths are no less true because of their brutality: the residents of Baltimore are responsible for the results of their leadership's failures. They are the one that put those leaders there in the first place.

He concludes by saying that if the protests aren't listened to, that there will be more of them. His evidence is that the American Revolution, slavery, and labor abuses were all ended by protest that ended up becoming violent.

Part of his comment: "Slaves weren’t freed by benevolent leaders wanting to do the right thing. No one gave the American worker better and safer conditions out of gratitude for a job well done."

Again, neither of these things are true. There were numerous Americans who wanted slaves to be freed. Numerous employers rewarded their employees and treated them fairly. In fact, in both cases it was a majority of Americans and business owners.

Protests and violence were obviously a massive part of ending slavery, for example, but the hundreds of thousands who gave their lives fighting for the end of slavery did so out of a benevolent commitment on behalf of people they'd never even met before, not because of protests. It's unbelievably demeaning and wrong to deny this fact.

By misidentifying problems, it's impossible to recommend solutions for them. Unfortunately, Abdul-Jabbar may be right in predicting that there may be more Baltimores in our future. But his descriptions of its causes aren’t going to do anything to stop them. Unlike his magical sky-hook's typical result, this was anything but net.