Michael Hammond
|
Posted: Jul 21, 2021 12:01 AM
Share   Tweet
The opinions expressed by columnists are their own and do not necessarily represent the views of Townhall.com. 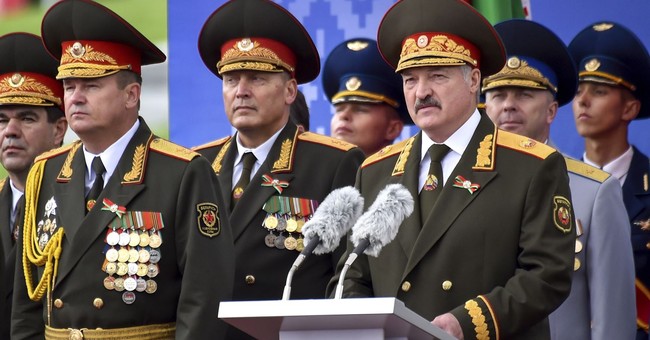 While the effort for freedom in Cuba has dominated the headlines, another group of people are fighting a similar struggle halfway across the globe. This past Wednesday, authorities from the Eastern European government of Belarus conducted more than 40 raids of homes and offices of dozens of journalists and human rights activists within its borders.

This occurred less than two months after a Belarus MiG-59 hijacked an international flight between Greece and Lithuania for the purpose of forcing it to land in the Belarusian capital of Minsk — and kidnapping a 26 year-old dissident/exile/journalist aboard.

And only last summer, hundreds of thousands of Belarusians (in a country with a total population of less than 10 million) demonstrated in the streets against the fraudulent reelection of Stalinist strongman Alexander Lukashenko. They were met with water cannons, rubber bullets, and automatic rifles firing blanks.

Yet, the most recent effort to stamp out dissent in this Stalinist anachronism was ignored in all but the footnotes of America's largest newspapers.

Why should we be concerned?

Already, Russian President Vladimir Putin is beginning to eye the reconstruction of the Soviet Union. The centerpiece of his vision would be a loose union between Belarus and the Russian Federation, supplemented by chunks of Ukraine that have already been invaded by Putin's forces — and perhaps Lithuania, which was resettled by Russian speakers under Josef Stalin.

As someone who witnessed the dissolution of the Soviet bloc at the hands of Polish Solidarity and many brave Eastern European freedom fighters, the concept that the Communist bloc might be wholly or partially reassembled is hardly a comforting thought.

I remember huddling under my school desk in anticipation of a Soviet nuclear attack. And, believe me, the world is better off under an atomized Soviet residue of 30 separate countries than a two-headed Communist dragon, with both heads snapping at us.

At a time when America faces a growing number of foreign threats, this may be the most important.

And yet, while it would be easy to turn up the pressure on this illegitimate government — to isolate and boycott it and freeze its assets — Washington seems to be disinterested. The EU has shown more backbone than us.

Sure, there are other problems in the world. Citizens seeking freedom are demonstrating in the streets of Havana and Hong Kong. And Washington doesn't seem to be willing to do anything in order to help them in their fight for freedom either.

The Sejm (a House of the Polish parliament) changed hands in June 1989. Feared Romanian strongman Nicolae Ceausescu and his wife received bullets in their heads on Christmas 1989, thereby completing the collapse of the entire Eastern bloc. (I know. I was in Romania in December 1989, when the revolution started.)

A year and a half later, the entire Soviet Union disintegrated into 15 separate republics — some of them pretty good.

For the record, nobody cared much about the Polish Solidarity Trade Union (NSZZ Solidarinosc) in 1988 either. Then, it overthrew its Communist government and toppled the dominoes that put an end to the Soviet Union.

After that, everyone in Washington was Solidarity's longest and dearest friend.  And everyone just "KNEW" the Soviet bloc was on its way out. I plead with everyone who is going to take credit when freedom comes to Belarus: Show some courage at a time when courage is still needed.

Let's not wait for Putin and Lukashenko to reconstitute the Soviet Union before we get off our tails and do something this time.

Michael Hammond is the former Executive Director of the Senate Steering Committee and was often called the "101st Senator" when he worked on Capitol Hill. Today he serves as the General Counsel of Gun Owners of America.