Michael Hammond
|
Posted: Aug 13, 2016 12:01 AM
Share   Tweet
The opinions expressed by columnists are their own and do not necessarily represent the views of Townhall.com. 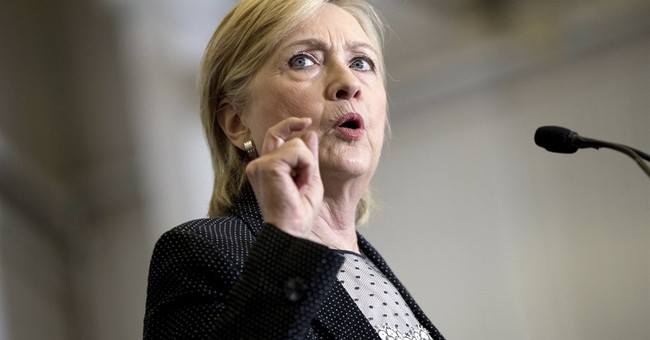 Paul Ryan, Kelly Ayotte, and John McCain got what they wanted. At the expense of their party, they bludgeoned Donald Trump into supporting their RINO candidacies over their superior conservative challengers.  Perrinnial Leftist lapdog, anti-gun activist Susan Collins (whose Collins/Snowe "Hamlet routine" in 2009 helped pass ObamaCare), also got a "doggie treat" from the press for her betrayal.

But, for other RINO's tempted to backstab the man who could be president, they may want to tattoo this talking point on their palms and read it whenever the Leftist press (including Fox) asks them anything about Donald Trump.

The talking point is this:  "I have no obligation to denounce my allies, just because you "order" me to do so.  And this is particularly true so long as you continue to excuse the vile, loathsome, and dangerous behavior of Hillary Clinton."

The fact is, there's a universe of things I find disgusting, starting out with each morning's edition of the New York Times.  And while I am almost always tempted to write a letter denouncing their contemptible hypocrisy, I never do.

Because you choose your fights -- and your denunciations.  And you probably should choose to fight your enemies, rather than your friends.

And whether the RINO's understand it or not, the loss of the White House this year will probably determine the course which this nation will take for the remainder of our lifetimes.

And everyone understands that but them.

These are the facts:  Donald Trump will win the presidential election on November 8, 2016.

Unless the Republican base throws the race.

Which they're more than capable of doing, at the behest of a "puppet press" which wants to utterly destroy them.

Make no mistake about it:  The press is running the same "playbook" they used to defeat Missouri GOP Senate candidate Todd Akin -- and to keep the Senate in Democrat hands that year.

But the "Todd Akin playbook" relies, for its success, on the Republican base buying into it.  Without that, it fails.

What is the "Todd Akin playbook"?  It works like this:  The Left takes a small misstep by a Republican candidate and trumpets it as though it was the most execrable error in the history of man. The quote is initially taken out of context, but, after the first day, it is no longer even quoted, and is merely characterized as "racist, bigoted, anti-woman, fascist," etc.

Coupled with phony polls to "show" the race is hopeless, the "Todd Akin playbook" only works if the press can convince Republicans to decimate their own candidate.

In the end, the race almost always turns out to have been imminently doable, but we find that out only after Republicans have abandoned it.

What sort of "missteps" are we talking about?

Two weeks ago, Democrats and the press were attacking the mother of a son killed at Benghazi in these terms:  "cynical exploitation," "an early dip into the gutter," "so offensive it was hard to comprehend," "the weaponization of grief," "deranged."  One Democrat said he wanted to "beat [the mother of the dead son] to death."

Now, these same hypocrites are working to destroy Donald Trump on the basis of mild comments about the varieties of sacrifice.

Ditto, Trump's comments Tuesday about the Second Amendment -- and Hillary's assumption that all 100,000,000 gun owners are killers, criminals, and assassins and that that's what Trump meant.

Ditto, a president who excoriated the Supreme Court to its face, and is suddenly strangely protective of Gonzalo Curiel, the biased, anti-Trump judge he appointed.

In each of these cases, our most ruthless enemies demand that Republicans throw the election, just as the usual suspects (John McCain, Kelly Ayotte, Lindsey Graham) obediently jumped up and barked, in the hopes that liberals would throw them a "doggie treat."

Why would we do that?

First, in dealing with national "head-on-head" polls, you have to subtract at least four points from Clinton's totals in order to find out where the race really is.

This is because Clinton will get 3-to-4 million (or more) excess votes in California, New York, and Illinois which will do her absolutely no good.

In 2012, Barack Obama won the popular vote by almost 5-million votes -- nearly 4% of the votes cast for Obama or Romney.  And, yet, a switch of under 214,800 votes in Ohio, New Hampshire, Florida, and Virginia would have put Romney in White House.  Thus a razor-thin 0.2% of voters determined the outcome of a race Obama won by nearly 5,000,000 popular votes.  It was a virtual "tie race," even though Obama won it by 4% of the popular vote.

And as California becomes bluer, with the recent registration of 1.5-million Democratic Hispanics, the trend is much more dramatic even than in 2012.  In fact, to account for the electoral college, in national head-on-head polls, you would have to subtract at least 4% from Clinton's total in order to determine where the race really stands.

And this is assuming polls which rely on 2008 and 2012 demographic models are remotely accurate, which they are not.  It's also assuming that polls (like Monmouth) which show 9% more Democrats than Republican (although the numbers are about equal) are not deliberately slanted, which is certainly also not true.

In 1996, when Pat Buchanan won the New Hampshire primary (and I was his chairman), the same unreliable polls (WMUR) which are now being bandied about showed him in single digits, until immediately before the election.

Similarly, during the Virginia McAuliffe/Cuccinelli gubernatorial race, the same polls which now show Trump losing that state (e.g., Reuters, Washington Post, etc.) showed Cuccinelli losing by up to 17 points.  Cuccinelli lost that race in a squeaker -- after Republicans largely gave up on him.

This week -- the week of Clinton's post-convention apogee -- Trump is within the margin-of-error (or better) in all of these states except Pennsylvania (or its substitutes).  And these polls will inevitably look better for Trump as ISIS attacks and Wikileaks continue to eat into Clinton's narrative.

And, in the three swing states, Clinton has four system problems:  guns, coal, Cuba, and trade.

Third, Clinton has spent enormous amounts of ad money early in the election, even though the general thinking is that the effects of this spending is transitory.

The exception was 2012, when June spending was used to "define" a relatively unknown Romney.  But neither Clinton nor Trump has been a "blank slate" for decades.

When a front-page "news" article in the New York Times argues that the Times should abandon its policy of news objectivity (!!!) because of the importance of this election, it tells you something about the rest of the "puppet press's" "news" coverage.  And the most important lie the press can make is the lie that "it's hopeless."  They have run this playbook before with Netanyahu, Cameron, and Brexit, however, and phony polls are not self-executing.  They work only if the victims "buy into" their narrative.

Why should we do that?