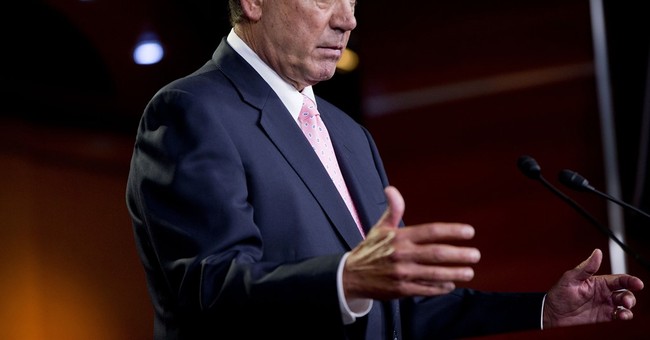 Once again, the dim-witted trio of Mitch McConnell, John Boehner, and John Roberts have been outsmarted by Barack Obama.

While McConnell and Boehner were “counting their money before they made the sale,” Obama and his captive media were engaging in a ruthless campaign to argue that the failed Obamacare program had suddenly become the biggest Christmas gift since the bicycle.

“Sixteen million insured,” they argued. And a dutifully compliant Congressional Budget Office chimed in on Obamacare’s “deficit benefits,” continuing to count unspecified Medicare savings which will never be realized -- just as 1997 Medicare “savings” were being permanently eliminated by the GOP’s “doc fix.”

Of course, only slightly more than 50% of doctors will accept new Medicaid patients, millions were rolled over from insurance they liked, millions more were simply dodging a penalty, 1.6 million enrollees didn’t even bother to pay. And more and more are finding $6,000 deductibles, massive out-of-network expenses, and double digit premium increases now that insurance company subsidies have ended.

All of this comes on the heels of six other Republican efforts to resurrect Obama’s fortunes, decimate their own base, and give Clinton a “lock” on the White House in 2016:

ONE: There was the Cromnibus to fund Obama’s illegal executive actions.

TWO: There was the “doc fix” payoff of the American Medical Association -- for providing pivotal support for the passage of Obamacare.

THREE: There was the concession that opposition to the Hyde Amendment was a legitimate beef.

FOUR: There were McConnell’s ruthless efforts to hand Obama a victory on the Loretta Lynch nomination.

FIVE: There was Obama’s momentous victory on fast-track.

SIX: There are the continuing efforts to pass a Rooseveltian highway bill.

If the election of 1988 shows us anything, it is that the one way to break the two-terms-in two-terms-out cycle of party control of the presidency is the perception of a successful president. You will remember that Democrats did not make that mistake with George Bush.

So what is to be done?

ONE: Get rid of the feckless McConnell and Boehner. They combine the deadly trifecta of stupidity, cowardice, and resolve.

TWO: Kill the Trans-Pacific Partnership. It will have pages of general statements, which, in the hands of Obama-packed courts, will give rise to a “New (Court-created) World Order.”

THREE: Kill the highway bill. It will be the payoff of Democrats who voted for fast-track (Ex-Im Bank reauthorization), together with a realization of Obama’s infrastructure priorities.

FIVE: Stop voting for the rule. Both fast-track and the Cromnibus were passed because congressmen supposedly opposed to them voted to bring them to the floor.

SIX: Support the Senate rules. Remember, earlier this year, how some short-sighted conservatives were pushing to eliminate the filibuster of legislation and the Supreme Court nominees -- while retaining the 50 vote margin for Obama appointees like Loretta Lynch? How do you feel about that?

SEVEN: Fight the CR. The press will try to tell you that using the “power of the purse” is discredited. But the GOP has so badly botched the last six years that, frankly, they don’t have any other options left.