Michael Glassner
|
Posted: Sep 06, 2018 6:29 PM
Share   Tweet
The opinions expressed by columnists are their own and do not necessarily represent the views of Townhall.com. 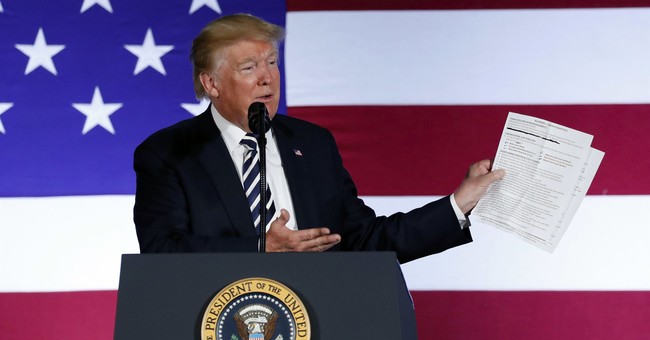 This time, Tester won’t be so excited to see Donald Trump. With a big boost from the President at the Great Falls rally on July 5, Tester’s opponent has since gained ground in the race for the U.S. Senate.

Prior to that visit, the Republican Senate candidate Matt Rosendale was trailing Democrat incumbent, Senator Jon Tester, by 8 points. Just one month later, the Republican candidate has flipped 10 points and now leads Tester 47 percent to 45 percent.

Thousands of people who showed up in Great Falls in July to hear the President speak left the arena with a fiery enthusiasm for the America First agenda. Their excitement is reflected in Rosendale’s rise in the polls.

Montana is just a small reflection of what’s possible when Donald Trump gets involved.

In case after case across the country, the Trump effect has manifested itself in both GOP primaries and general election outcomes. Through campaign rallies and midterm endorsements, President Trump is impacting races across the 2018 political landscape. He’ll make a huge, if not decisive, difference in November.

President Trump has had a near perfect record in special House elections, and endorsed over a dozen Republican candidates who went on to win their respective primaries.

For instance, when Republican congressional candidate Troy Balderson was trailing in the special election for Ohio’s 12th Congressional District, President Trump saved the day with a last minute rally in Delaware County, a pivotal area of the district. His intervention ultimately secured Balderson’s victory.

That track record of success is bad news for Jon Tester. When President Trump visits Billings on Thursday night, he won’t hesitate to remind Montanans just what Tester stands for — and just what they stand to lose if Tester is reelected.

Tester voted against the tax cuts that created thousands of new  jobs and higher paychecks for Montanans, supports sanctuary cities that protect illegal aliens, and has voted against nearly every single one of the President’s appointments.

Tester and his fellow Democrats also threaten the incredible economic progress we’ve gained across Montana. In July, the Montana unemployment rate dropped to 3.7 percent — its lowest level in 11 years — and the state has added nearly 7,000 jobs since the President took office.

Ultimately, President Trump’s visit to Billings will remind the people of Montana that despite Jon Tester’s promises to represent them faithfully, he’s done little but represent the interests of the Democrat Party.
Tester may praise President Trump yet again, but when the President comes to town and reminds Montanans just what’s at stake in November, no number of gushing newspaper ads will be enough to save Jon Tester from the Trump effect.