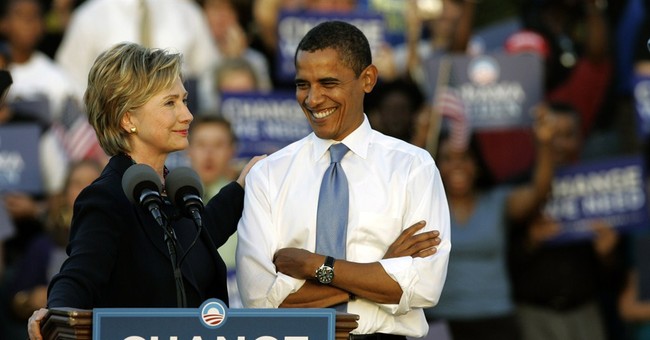 WASHINGTON -- One outcome of and proof for ideological polarization is the way it has made stalwarts appear like centrists. In what world is Hillary Clinton -- feminist heroine, author of Hillarycare, sworn enemy of the vast right-wing conspiracy -- not progressive enough? In what parallel universe is Jeb Bush -- a tax-slashing, school-voucher-supporting, pro-gun former Southern governor -- some kind of moderate?

George Wallace, who managed to be foolish on an amazing variety of topics, claimed there wasn't "a dime's worth of difference" between the Democratic and Republican parties. It wasn't really true in 1968. It is dramatically less true today. The political parties have sorted themselves both regionally and ideologically. A recent survey by the Pew Research Center found that across a variety of policy issues, "Democrats now give uniformly liberal responses, and more Republicans give uniformly conservative responses than at any point in the last 20 years."

Clinton and Bush are each, roughly, in the mainstream of their respective parties. But those streams have dramatically diverged. A Clinton-Bush presidential contest would be among the clearest choices in modern political history. Yet for some -- who prefer an ideological palette consisting entirely of neon colors -- the contrast is not nearly vivid enough.

The main question for Democrats in 2015: Will there emerge a credible challenge to Clinton from the populist left? There were hints of mutiny in Sen. Elizabeth Warren's opposition to the recent omnibus spending measure. There are whispers of rebellion in Sen. Al Franken's opposition to Antonio Weiss -- President Obama's nominee to a senior Treasury Department post -- for the crime of coziness with Wall Street. There is open mutiny over at MoveOn.org, which is circulating a draft Warren petition. "The establishment Dems need to be punished," says the leaked email of one progressive activist, "and the best way for that to happen is for Warren to beat Hillary in the primary on a populist message."

It is difficult to imagine the Zuccotti Park progressives gaining much traction without Warren making a determined run at the nomination. But they have an advantage and a precedent: Clinton is a politician of average skill, and she was defeated in 2008 with the help of the anti-war left.

The main question for Republicans in 2015: Will they use their midterm victory to address serious gaps in their public appeal and set the stage for a credible nominee?

With control of both the Senate and House, Republicans will need to advance a popular version of their agenda -- on health care, welfare reform, higher education -- knowing that their efforts will be killed by a filibuster or a veto but trusting they will present their best face to the public. The strategy involves conducting small, carefully orchestrated fights over policy rather than forcing cataclysmic battles over funding. This is what control of Congress allows: defining advantageous issues on which to argue rather than treating government as a yes-or-no question.

But the approach presupposes a broad Republican belief that they have an image problem in the first place. After the GOP's 2010 congressional victory, many conservatives thought that all that was required was greater ideological daring and the country would follow along. Then came the 2012 presidential election and the 2013 government shutdown. "They scoffed that the American people would rise up," said Sen. Ted Cruz after a shutdown that most Americans opposed, and which pushed favorable opinion of GOP to historic lows.

After a convincing 2014 victory, will Republicans use the opportunity for necessary repositioning on issues that help (and are perceived to help) middle-class families? Or will they seek ideological showdowns on issues -- debt, immigration, Obamacare repeal -- that they present as apocalyptic struggles over the future and nature of the republic?

The tests will come early. A significant portion of the Republican House caucus wants bold action in February to challenge Obama's executive order on immigration. Some conservatives (against the advice of their leaders) may want to demand White House concessions in exchange for a debt-limit increase. Both of these issues could be traps -- games of chicken with a president who has little left to lose. And they could end up wounding rather than helping the GOP presidential nominee.

Those who judge a Bush-Clinton race to be a tired retread or disturbingly dynastic should consider the more novel and dynamic alternatives. A Warren-Cruz race would be less of an electoral choice than a national trauma. It's been said that too much clarity darkens.