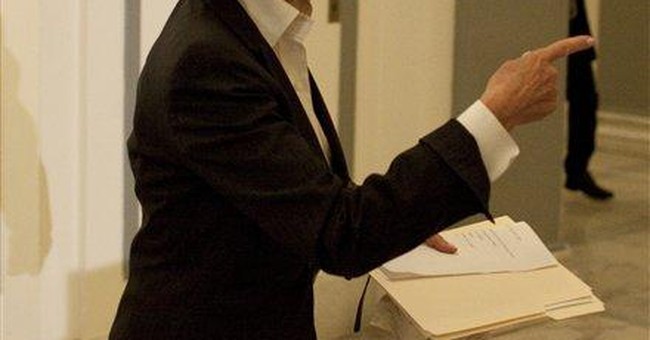 WASHINGTON -- The final outcome of the health care reform debate is uncertain -- who can predict where a writhing eel will land? -- but we have learned a few things already.

First, we know that President Obama and the Democratic congressional leadership could not persuade a majority of Americans of the wisdom of their plan -- and have largely ceased to try.

As of this writing, a president who seems willing to interrupt prime-time programming on the slightest pretext has not scheduled a speech from the Oval Office to make his final health reform appeal. House Speaker Nancy Pelosi is working her parliamentarians overtime to achieve the congressional equivalent of the Immaculate Conception -- a law without a vote. One gets the impression that Democrats would prefer health reform to slip by the House in a procedural maneuver on a Friday night during the NCAA basketball tournament -- which it might.

The most visible Democratic domestic priority of the last 40 years must be smuggled into law, lest too many Americans notice. Politicians claiming the idealism of saints have adopted the tactics of burglars. Victory, if it comes, will seem less like a parade than a heist.

Liberals tend to blame this state of affairs on the brilliance of Republican fear-mongering. Meaning the slashing wittiness of Sarah Palin? The irresistible charisma of Mitch McConnell? The more likely explanation: Americans are engaged in a serious national debate about the role and size of government, in which the advocates of government-dominated health care are significantly outnumbered and vastly outmatched in enthusiasm. America, despite liberal fear-mongering, has not become "Glenn Beckistan." But it is not yet Europe.

A second thing we have learned during the health care debate is that the Democratic Party's commitment to abortion rights is even more central to its identity than health reform.

Pelosi's initial concession to pro-life Democratic Rep. Bart Stupak -- preventing federally subsidized health plans from covering abortion -- was made for show. The Senate-passed bill allows subsidized plans to cover abortion by collecting an extra payment from every enrollee, as long as at least one other insurance option in a region doesn't cover abortion. This is a departure from the status quo, which not only prohibits the use of federal funds for elective abortions but also prohibits the use of federal funds for health plans that cover such abortions. Says Stupak: "I really believe that the Democratic leadership is simply unwilling to change its stance. Their position says that women, especially those without means available, should have their abortions covered."

But this stance by the Democratic leadership violates an informal social agreement that has existed for decades, in which abortion is generally legal but citizens who object to the practice are not required to pay for it. Those who support the Senate bill are participating in the largest expansion of federal involvement in abortion since the Hyde Amendment limited that role in 1976.

Third, we have learned that the president and congressional leaders are not serious about entitlement reform. The problem here is not only accounting tricks and the assumption of unprecedented courage on the part of future Congresses when it comes to Medicare cuts -- though these are bad enough. The main source of irresponsibility is that the revenue-gaining measures in the health bill -- particularly Medicare cuts and taxing Cadillac health plans -- would be used to create a new entitlement instead of repairing an existing one. The greatest cost of the current health care reform is its opportunity cost.

The unfunded liability of America's current entitlements is more than $100 trillion. Medicare will eventually require a massive infusion of cash under a congressional entitlement fix. Both the Congressional Budget Office and the Medicare actuary have pressed the point that Medicare savings can either be used to pay future Medicare benefits or to finance new spending outside Medicare -- not both. When the entitlement crisis arrives, Obama will have already spent much of the resources required to meet it, leaving growth-killing new taxes as the main, remaining option. A value-added tax anyone?

For some elected Democrats, the prospect of expanding health coverage is a moral goal worth the compromise of any principle and the adoption of any necessary method. But they need to enter their vote with open eyes. The passage of this legislation would decisively confirm an image of the Democratic Party that many have worked to change: partial to big government, pro-abortion and fiscally reckless.

Liberals Are Really Going to Hate Ron DeSantis Over Florida's Latest COVID Benchmark
Townhall
UPDATE: The FDA and CDC will 'call for an immediate pause in use of Johnson & Johnson's single-dose coronavirus vaccine'
Twitchy
Jen Psaki Stumbles Upon the Truth After Asked if Biden Admin Is Contributing to Vaccine Hesitancy
Redstate
The Morning Briefing: U.S.May Want to Look Into Getting Rid of Minnesota
PJ Media