Rally Around the Flag - and the President 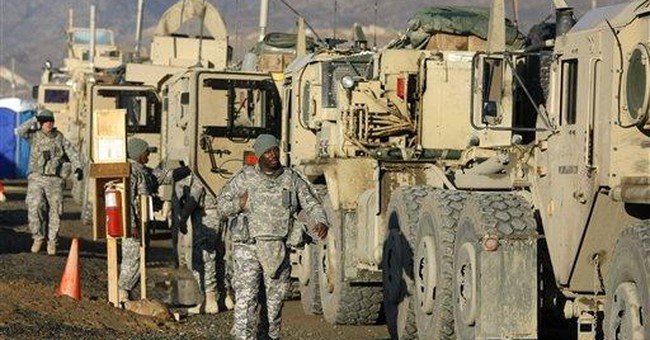 In contrast to the expectation that he would settle on a timid half-measure, Obama took more of a seven-eighths measure, leaving his commanders impressed and satisfied. In contrast to former Vice President Richard Cheney's charge that Obama is making national security decisions for "small 'p' political reasons," the president opposed his political base. There is no credible explanation for these actions except a commitment to the national interest. It is time to rally around the president.

Obama's failure -- which is small beside his admirable decision -- has been a failure of communication. During 34 long minutes at West Point, he did little to describe how the troop surge will proceed, and why it could succeed.

Military leaders in Afghanistan make the case better. The source of their confidence is simple: In areas where coalition forces provide effective security, communities respond well -- cooperating with outsiders and rebuilding their own institutions of tribal self-government. But there are not enough of these stable communities, because there are not enough troops on the ground.

In places without security, the Taliban rules by intimidation. Locals receive "night letters" threatening harm and death if they work with the coalition or with cooperative mullahs. Delivered in the dead of night, these notes are often effective.

Eventually, Afghan forces must be able to provide an atmosphere of stability. Which is why the military training component of the surge is so important. This is not a classroom exercise. It consists of American forces partnering with Afghan units -- transmitting knowledge and providing examples of professionalism. Afghan soldiers work hard to impress and emulate their American counterparts. And these partnerships also fight corruption. It is more difficult to be on the take when someone is watching.

The surge in Afghanistan will unfold differently than the one in Iraq, where the enemy held a number of safe havens around Baghdad and in Diyala province. The American military knew that a few additional brigades could flush them out and protect civilians. Some large-scale operations in Afghanistan will be similar. But every valley in Afghanistan's Pashtun east and south has its own story, with locals fighting for different reasons. The effort to pacify these areas will be selective and difficult.

The chaos of the border regions of Afghanistan and Pakistan has attracted some of the most committed terrorists in the world -- people who will only end their struggle in the grave. But Afghanistan also has a lot of "accidental guerrillas" -- tough, armed, angry locals who are not part of the war on terror. They must be convinced to return to stabilized communities and accept the authority of tribal elders.

The largest obstacle to this outcome is governmental corruption -- one of the main motives for the insurgency. This is not the traditional Afghan corruption of nepotism or favoring one's own tribe. It is something relatively new -- massive, vertically integrated gangsterism. People selling off the assets of the state and diverting development money to offshore banks. These gangster-warlords are undermining faith in the Afghan government at the very time such faith is essential to counterinsurgency success. Afghan President Hamid Karzai will need to conduct several high-level prosecutions and replace corrupt officials at every level.

But American commanders do not believe this effort is hopeless. Even modest improvements in governance might convince some Afghans to abandon the insurgency -- especially if that insurgency is also more likely to result in their death.

This may sound like a daunting set of objectives. Actually, it is standard counterinsurgency theory. Protect civilians against violence -- the basis for all progress. Get them a job -- the role of aid and development. Improve governance. Train security forces to assume more and more responsibility. Such efforts, on a large enough scale, can gather a virtuous momentum, giving local leaders the confidence to cooperate and provide intelligence on the most brutal bad guys.

It worked in Iraq. It is working in parts of Afghanistan. It may work more broadly -- if Americans show resolve and patience.

Eventually, Obama must make this case in detail, because the test of his wartime leadership is only beginning. There will be tough fighting next spring and summer as the coalition goes on the offensive to reverse the momentum of the Taliban and provide the security needed to enable economic and political progress. As casualties increase, effective explanation of this strategy will matter more and more.