The First Election of the Obama Backlash 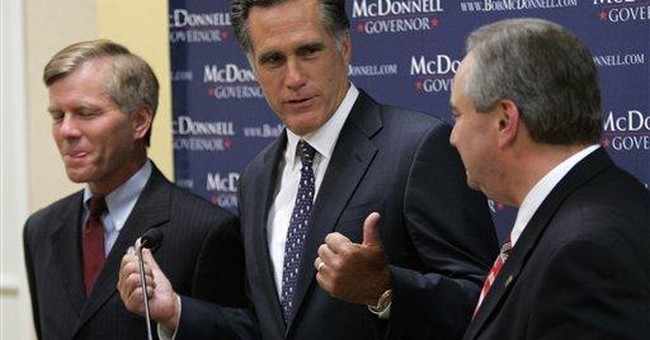 The late-night hotel desk clerk in Salem, Va., -- after my long drive from Washington down the Shenandoah Valley -- wanted to talk political philosophy. He intended to support Republican Bob McDonnell for governor in November on Madisonian grounds. "I vote both parties, but I don't want anyone having all the control." Obama, in his view, needed to be checked and balanced.

This is the durable tendency of Virginia politics. Since 1977, the political party that has won the presidency has, in every case, lost the Virginia governorship in the next election. This pattern of cussedness is holding, at least for the moment. McDonnell, Virginia's former attorney general, is currently well ahead of his Democratic opponent, Creigh Deeds -- in one poll leading by 15 percent among likely voters.

McDonnell, riding in a well-worn, 30-foot blue RV from dairy farm to winery to college campus, recounts to me how the political environment has changed from a year ago. "The business community," he says, "was the first to recoil" from policies such as card check and cap-and-trade. "But health care now dwarfs previous concerns -- handing over the best medical system in the world to the federal government. It affects everyone." Conservatives, he contends, are more activated than at any time since 1993. A young McDonnell campaign worker told me: "We have the enthusiasm Obama's people had last time."

Well, not quite. About 50 students greeted McDonnell when he arrived at the James Madison University dining hall. A year ago, some James Madison students waited in line more than four hours to get a glimpse of candidate Obama. But in the low turnout of a nonpresidential election year, any momentum gets magnified, and McDonnell seems to have the intensity advantage.

So how do Republicans find success in the first election of a growing Obama backlash? Not by bashing Obama himself -- something McDonnell is careful to avoid. In the day of campaigning I witnessed, McDonnell mentioned Obama by name only twice: once to praise his views on charter schools, the other to note that, "We use the same company that did Obama's text messaging." Obama turned out hundreds of thousands of new Virginia voters last November, concentrated among minorities and in suburban areas. McDonnell wants to appeal to these voters, not alienate them with direct attacks on the president. "This is about policy," he says, "not personal. If the president is right, I'm willing to work with him."

McDonnell is no moderate Republican. He is an unapologetic pro-life, pro-gun, fiscal conservative. But as a prospective governor, he is forced to live in the real world of governing -- unlike some congressional Republicans who view obstruction as the highest goal of politics. McDonnell's campaign is a proliferation of 10-point plans -- on energy, transportation, crime and economic development. McDonnell cut his political teeth as an intern at the House Republican Policy Committee. He talks with wonkish intensity about gang reduction, drug courts, trade promotion, college access, wine tourism and plans for the sesquicentennial commemoration of the Civil War.

This is not just a matter of personality but of strategy. Virginia elections are won in a mostly suburban crescent that runs from Northern Virginia to Richmond to Virginia Beach, in which about 70 percent of voters live. Suburban voters tend to be more focused on quality-of-life issues -- education, transportation and crime -- than ideological debates. So while Obama's overreach provides McDonnell with a political opportunity, employing a simplistic anti-government message would not suffice. "People expect government to be efficient -- simpler and more user friendly," says McDonnell. At another point: "We must make government work better." The effective Obama backlash will be led by reform-oriented wonks, not ideological arsonists.

National Republicans might learn a stylistic lesson from the Virginia race as well. McDonnell is a conservative, but he is not a rural, us-against-them populist. His family roots are suburban. His bearing is military -- precise, earnest, respectful and formal. (He wore a coat and tie to shake hands at Famous Anthony's, a breakfast place in Salem -- perhaps a sartorial first at that location.) McDonnell manages to make a conservative case against federal excess without conducting a cultural battle against social elites and city-slickers. Which might be helpful with the city-slicker vote.

The Virginia election, in less than 70 days, may symbolize the Obama backlash, with broad implications for his agenda. More importantly, it may show Republicans a responsible way to win in the Obama era.