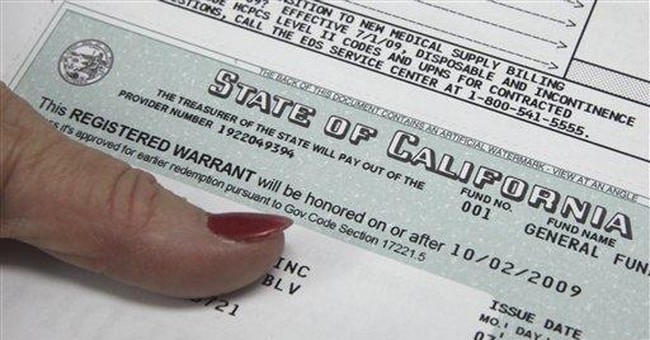 WASHINGTON -- There was a time when international trade was the subject of poetry. In "Locksley Hall," Alfred Tennyson "Saw the heavens filled with commerce, argosies of magic sails / Pilots of the purple twilight, dropping down with costly bales."

Recently, however, trade has inspired more resentment than verse. During a recession, the threat of foreign competition can seem more real and present than the opportunities of foreign markets. According to the World Trade Organization, 30 countries have imposed trade-restricting measures since the onset of the economic crisis. China included a "Buy Chinese" provision in its own stimulus package. The U.S. Congress has variously threatened to impose tariffs as an instrument of climate policy, limited bailed-out banks in hiring foreign workers and encouraged states receiving stimulus funds to "Buy American."

All this is politically understandable -- and economically insane. With the world experiencing the largest drop in trade volumes since World War II, actions that restrict global trade will delay global recovery. Protectionism is economically self-destructive: Won't American companies eventually want to compete for contracts in India and China? Protectionism is diplomatically self-defeating: Do we really want to pick trade fights with our closest friends, such as Canada and Mexico? Protectionism is outdated: The distinction between foreign and domestic companies is blurred when many use transnational supply chains. And protectionism is unjust: The world's poorest countries are often the most dependent on exports.

Fortunately, after a fling with union-pleasing protectionism during his campaign, President Barack Obama has largely adopted the pro-trade consensus of his predecessors. He has signaled support for bilateral trade agreements with South Korea and Panama, and openness to a pact with Colombia. At the recent G-8 meeting in Italy, he joined other leaders in calling for the conclusion of a global trade deal in 2010 to comprehensively reduce tariffs and quotas.

Unfortunately, grand goals are the cynical staple of summits. Completing the global trade negotiations begun in Doha in 2001 will require developing countries such as China and India to open their manufacturing and service sectors, and the United States and Europe to dramatically reduce agricultural subsidies and barriers. And it will require Obama not merely to acknowledge the need for trade, but to press the arguments for trade on Capitol Hill and within his party.

All of this is unlikely (though not impossible). But even in the absence of a global trade agreement, America has a responsibility to fix its own tariff system -- a system that often punishes the poor.

Current law is supposed to allow developing nations to export duty-free into U.S. markets. In practice, however, restrictions and limits are placed on imported clothing, textiles, footwear and agricultural products -- which are exactly the kind of labor-intensive products that many poor nations produce best. So American tariffs effectively single out the poorest nations for the highest international taxes. On average, these countries pay more than three times the tariff rates of our richest trading partners.

One example: According to the Center for Global Development, Cambodia and Bangladesh pay about the same total tariffs to America as do France and the United Kingdom -- even though those European countries export about 15 times more to the United States. And in 2006, America collected about $850 million in tariffs from Cambodia and Bangladesh, mainly on imported apparel -- which is about seven times more than we provided in foreign assistance to those impoverished countries.

How to change the system? Kimberly Ann Elliott, a senior fellow at CGD, recommends that Congress provide 100 percent duty-free, quota-free access to American markets for 70 of the most vulnerable countries on Earth -- ending the discrimination against products produced by the world's poor.

There are good humanitarian reasons for this reform, which would help nations suffering from a global recession they did nothing to cause. There are national security justifications: America has a direct interest in promoting economic growth and stability in parts of the world otherwise prone to terrorism, criminal gangs and epidemic diseases.

And there is a domestic economic argument. The very products produced by the poor abroad -- clothing, shoes, food -- are necessities for the poor at home. Our current tariff system is a regressive tax on these goods.

The cost of this reform to American manufacturers would be minimal -- even under Elliott's proposal, less than 2 percent of American imports would come from the countries granted duty-free, quota-free access. But the effect in those nations could be large. Even if international trade is no longer cause for poetry, it is cause for hope.