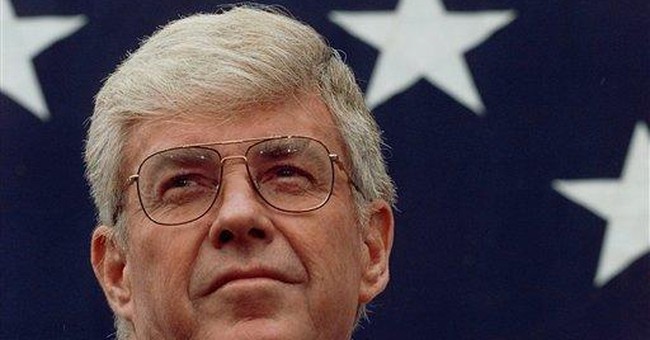 WASHINGTON -- Some deaths make the world feel old, like they have stolen a part of youth itself. Normally this applies to those who die in their prime. But Jack Kemp's prime was supernaturally long. It is difficult to imagine his bounding arrivals, his shaken-gravel voice, his juice and joy, all stilled and ended. But there it is.

Generations of young conservatives -- most of us no longer young -- were drawn into Jack's orbit (I worked for him briefly in the 1990s as a speechwriter). We were attracted, in one way or another, to Jack's "bleeding-heart conservatism," with its mix of economic opportunity, social inclusion and ebullience. We came to love Jack's gracious wife, Joanne, and his accomplished children. We hoped and expected that Jack would become president of the United States. In the end, he lacked the consuming focus that quest requires. But in his passion for ideas -- and in the affection he inspired -- Jack was the most influential modern Republican who never became president.

Jack believed that ideas -- not interests or political deals or public passions -- rule the world. In this sense, he strangely resembled idealists such as Hegel or Marx, who discerned hidden, powerful currents beneath the surface of history. For Jack, that force was "liberal democratic values" (small "l" and small "d," as he invariably added). Economic freedom, in his view, provides the poor with a hope beyond the dreams of socialism or large "L" Liberalism -- the hope of becoming wealthy themselves. Opportunity, he argued, is the most important measure of economic justice; capitalism is perfected by the broadest possible distribution of capital; and economic freedom and political freedom are inseparable.

This belief in the power of ideas removed all rancor from Jack's political approach. Everyone fell into one of two categories: convert or potential convert. He seemed to believe that if he had just an hour -- better yet, three hours -- with anyone, he could change his or her mind by the force of his ideas. So he gave nearly everyone the benefit of the doubt. He assumed good will on the part of his opponents. And he became the rarest kind of public figure -- a conviction politician who was also a peacemaker.

The direction of Jack's career was set by two events. In the 1960s, he saw the American civil rights movement from the perspective of sports. As a quarterback and leader of the American Football League players union, he stood up for African- American teammates victimized by segregation on their travels. The experience left a deeply rooted impatience with bigotry.

For this reason, Jack criticized the failures of urban liberalism -- the high-rise horrors of the projects, the economic desolation of the inner city, the schools that betray minority students without consequence. He became the nation's leading advocate for educational vouchers, housing vouchers and enterprise zones -- applications of his philosophy of freedom to the needs of the poor. But Jack was nothing if not consistent. The same impulse led him to assert that the party of Lincoln would never be healthy or complete without the support of African- Americans -- and to oppose outbreaks of anti-immigrant sentiment among Republicans, often at political cost to himself.

The second event that shaped Jack's career was a stroke of intellectual lightning in the 1970s that became known as supply-side economics. Jack was an amateur economist of broad reading, convinced he knew exactly the way the world works. National wealth depends on productivity, which depends on low tax rates that reward work, enterprise and investment. So as a backbench congressman, he proposed 30 percent across-the-board tax reductions, persuaded Ronald Reagan to embrace them, and helped spur decades of prosperity. Some dispute this version of economic history. Yet few would recommend a return to the 70 percent tax rates and stagflation of America before Jack Kemp.

Jack's ideals and priorities never really changed over the years, as a congressman, as a Cabinet secretary, as a vice presidential nominee. This is a contrast to many Republicans, and former Republicans, who will leave no mark beyond the vague, unpleasant memory of their opportunism. Even in Jack's absence, we know precisely what he would say: You can't divide wealth you don't create. Don't punish the rich, enable everyone to become rich. Value the dreams and contributions of immigrants. Be a happy warrior, not an angry one.

But as much as we need it, we won't hear that voice again. It left a massive silence when the bleeding heart stopped.