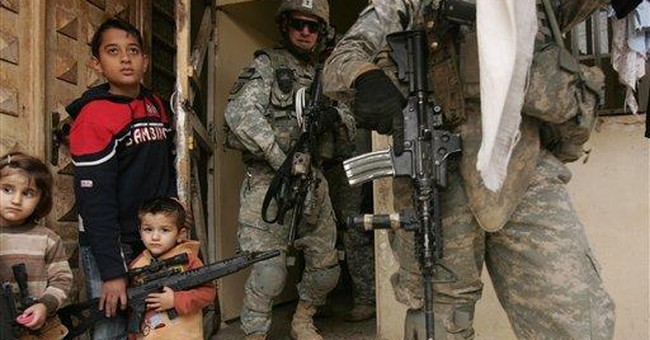 WASHINGTON -- A war that once seemed likely to end in a panic of helicopters fleeing the American embassy now seems destined to conclude as the result of a parliamentary process. A landmark status of forces agreement (SOFA) -- requiring the withdrawal of U.S. combat troops from Iraqi cities by the end of June, and from Iraq itself by the end of 2011 -- is headed for a final reading in the Iraqi parliament next week.

The approval of the SOFA would leave a chapter of history decorated with paradoxes. President George W. Bush -- who once called withdrawal timelines "arbitrary" and "unacceptable" -- ends his term by accepting them. President-elect Barack Obama will inherit a more peaceful Iraq because of policies he strongly opposed. And the Iraqi government -- so often criticized by Americans as weak and ineffectual -- is now asserting its sovereignty in a decisive manner, for good or ill.

The withdrawal deadlines contained in the SOFA seem like concessions from the Bush administration -- and they are. Officials are careful to point out that the June withdrawal from Iraqi cities merely codifies the current process of transferring provincial control to Iraqi forces -- and that both sides are free to renegotiate the agreement when it expires in three years. But the deadlines in the SOFA do limit the tactical flexibility of the next president in ways the current president would not have preferred.

Yet President Bush can take comfort from the fact that these deadlines are only conceivable because of the success of his surge strategy -- because al-Qaeda in Iraq has been decimated and the Sunni revolt has died down. Put another way: The more successful the surge has been, the less dangerous the deadlines for withdrawal have become. And this, after all, was the whole purpose of the surge -- it was intended to be a "bridge strategy" from the failures of 2005 and 2006 back to a situation where an orderly withdrawal would be possible.

The SOFA also may seem like a vindication of the Obama approach to Iraq -- but it isn't. Candidate Obama proposed the withdrawal of all combat brigades from Iraq by March 31, 2008 -- a policy that would have left chaos and perhaps genocide in its wake. He stuck with a strategy of precipitous withdrawal even after the successes of the surge became evident. But the new, more responsible timetables of the SOFA became possible not because of Obama's views but in spite of them.

Yet both leaders are likely to see benefit from the agreement. If a broadly based Iraqi government emerges as American troops withdraw, Bush's Iraq policy will demand and deserve a major historical reassessment. And the SOFA should allow President Obama to reinterpret his campaign pledges on Iraq in a more responsible manner -- giving deference to the best military advice during the next three years and avoiding destabilizing actions.

The success of the surge has achieved some extraordinary things -- not only the possibility of peace in Iraq but also a convergence in American politics. The modified Bush and the modified Obama positions on Iraq are quite close. Both leaders have accepted a responsible, gradual withdrawal, and the possibility of leaving behind success instead of failure.

Much of that success, of course, will depend on the Iraqis themselves -- particularly the leadership of Prime Minister Nouri al-Maliki. If he acts the part of a benign nationalist, he could father a stable and unified nation. If he uses the military we have built, in the vacuum left by American withdrawal, to attack his enemies and consolidate his personal power, he could provoke another civil war with the Sunnis.

Administration officials believe they have taken precautions that will encourage Iraqi nationalism over a destructive pan-Shiism. Iraqi security forces and police have been carefully integrated. Provincial elections in January will give greater influence to disenfranchised Sunnis (who foolishly boycotted the last elections). And national elections set for December of next year could act as a check on Maliki's ambitions and abuses.

Dealing with the new Iraq will not be easy. It has become a prickly nation, jealous of its sovereignty and determined to avoid even the appearance of American imperialism. But this also means it is becoming a "normal," self-governing country, in the midst of a national debate on its security just six years after the end of a vicious tyranny.

The cost of this success has been high for America, and some may argue it has not been worth the price. But it is still a success.