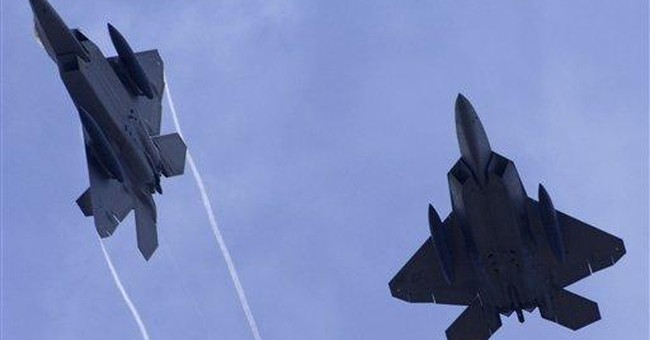 The F-22 Raptor is “the most capable multirole combat aircraft in production today,” according to the think tank Air Power Australia. Yet only 203 have been ordered out of the original Air Force request for almost four times that many, and within weeks President Obama must decide whether to order more or let the assembly line close.

The Boeing and Lockheed Martin F-22, which entered service three years ago, blends key technologies that formerly existed only separately on other aircraft – or not at all. Its stealthiness will make trigger-happy combatants shoot at birds. It has agility, air-to-air combat abilities and missile defense penetrability far beyond that of the F-15 Eagle which entered service 33 years ago. It cruises at Mach-plus speeds without using fuel-guzzling afterburners.

During Exercise Northern Edge 2006 the F-22 “fought” as many as 40 "enemy aircraft" during simulated battles, including F-15s, F-16 Fighting Falcons, and F/A-18-F Super Hornets. It achieved an incredible 108-to-zero kill ratio.

So how could this program be in danger of crashing and burning? Mainly it’s the old (and true) cliché that strategists plan to fight the next war based on the last (or current) one. Where once we planned for massive set-piece battles, now it seems many can’t see beyond guerrilla warfare with lightly armed insurgents. Conventional war weapons programs are being eliminated or slashed.

Yet bizarrely, this very decline in order size is being used to shoot the Raptor down.

Technology development costs are fixed. Each time critics slashed the F-22 order, they then cited the “stunning increase” in per-unit cost to slash away again. This game has played out with one weapons system after another, helping explain why an initial plan for acquiring 132 B-2 Spirit bombers ended with a pitiful purchase of 21 of those incredible aircraft. At the current tiny order size, F-22s are $339 million each. But with R&D paid for the current cost for each additional F-22 is only about $136 million, according to the Air Force.

If necessary, the Air Force says it will try to fill the F-22 shortage by keeping F-15s flying to 2025. It won’t work. Even eight years ago, “some foreign aircraft we’ve been able to test, our best pilots flying their airplanes [from other countries] beat our pilots flying our airplanes every time,” then-Air Force Commander John Jumper told Congress.

Two years earlier, the independent Federation of American Scientists (FAS) noted that the Russian Sukhoi Flanker Su-27, which entered service eight years after the Eagle, “leveled the playing field” with the F-15. Su-27’s, both Russian-built and Chinese pirated copies, are now in arsenals around the world.

Nor are enemy fighters our only worry. Russian surface-to-air missiles (SAMs) have improved dramatically in recent years. The country’s S-300 system is “one of the most lethal, if not the most lethal, all-altitude area defense,” noted the International Strategy and Assessment Service, "a Virginia-based think tank focused on U.S. and Allied security issues." three years ago. China also has the S-300 and the Russians announced in December they’ll soon sell units to Iran.

The sale not only would threaten stand-off warning and control systems like AWACS but also tremendously boost defense of Iran’s Bushehr nuclear reactor and Natanz uranium-enrichment site.

The newer S-400 system, already deployed, is far better able to detect low-signature targets and aircraft generally, as far away as 250 miles away, according to the FAS. That’s twice that of the S-300. When mated with the Triumf SA-20/21 missile, which Russia claims it tested in December, it can even knock down ballistic missiles.

Some have demanded trading off F-22s for more of the cheaper F-35 Lightning II Joint Strike Fighter (JSF), although it’s vastly inferior in both air-to-air combat and ground defense penetration. Further, much of that lower price reflects the economy of scale of the vastly larger order F-35 orders, even as increased development costs have tremendously upped the Lightning II price tag.

The current Air Force budget estimate says the “flyaway unit cost” of its F-35 version will be strikingly higher than that of the F-22 during the first four years of production. Only then will assembly line expansion drop the F-35 sticker to $91 billion by FY 2013.

The Russia bear has awakened from hibernation to rebuild its lost empire. China continues its inexorable military expansion. Iran desperately wants The Bomb, while North Korea revels in unpredictability. Yes, Virginia, we really do have potential enemies with weapons other than AKs and IEDs. We desperately need far more F-22 Raptors — preferably to prevent wars but if need be to win them.