To Former First Lady Michelle Obama: No Trump, Should Not Be Banned from Social Media for Life

Michael Brown
|
Posted: Jan 09, 2021 12:01 AM
Share   Tweet
The opinions expressed by columnists are their own and do not necessarily represent the views of Townhall.com. 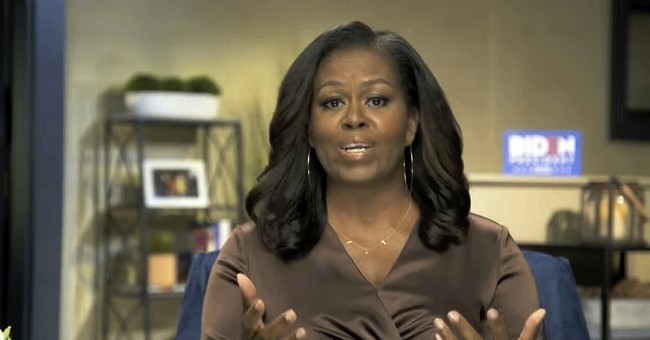 It’s one thing to debate whether Twitter and Facebook were right to block President Trump’s account in the immediate aftermath of the storming of the Capitol on Tuesday. I would argue that the move was unjustified, being yet another example of Big Tech overreach and censorship. On the other hand, in the heat of the moment, and with fear that the president could incite rioters, an argument could be made for a temporary block. But to ban him for life? On what grounds?

Well, according to former First Lady Michelle Obama, because he is “infantile and unpatriotic.”

She posted her comments on social media in the immediate aftermath of the storming of the Capitol on Tuesday, laying the blame for the day’s events at the feet of President Trump. She also managed to bring race into the discussion as well, alleging that had the protestors and rioters been black, they would have met with much different resistance from the police.

Specifically, she gave these recommendations regarding the president: “Now is the time,” she wrote, “for those who voted for this president to see the reality of what they’ve supported – and publicly and forcefully rebuke him and the actions of that mob.”

She continued, “Now is the time for Silicon Valley companies to stop enabling this monstrous behavior – and go even further than they have by permanently banning this man from their platforms and putting in place policies to prevent their technology from being used by the nation’s leaders to fuel insurrection.”

What an absolutely outrageous, un-American request (or, perhaps, I should say, demand?). What a dangerous post. It is the Former First Lady who should be challenged for saying such things.

To be clear, as the ugly scene was unfolding on Tuesday, I began my radio show by laying the blame squarely at the feet of President Trump (see here).

I have consistently raised those concerns during his presidency (as a supporter), and even if he, too, was shocked and appalled at the day’s events, and even if there were some outside agitators involved as well, he helped to create the larger environment in which this horror unfolded.

In that regard, I don’t disagree entirely with Mrs. Obama.

Of course, her overall, race-related narrative of the day is a sham, a fictitious rewriting of recent history, glorifying the “overwhelmingly peaceful” race protests of 2020 and accusing the police of all kinds of brutal acts during those blissful protests.

As Mike Miller rightly asked on RedState, “Where was Michelle Obama, night after night when Ferguson, Missouri, was on fire; night after nights of riots in the aftermath of the justifiable police action against Michael Brown?

“Did she condemn that real violence? Half as much as she condemns the indefensible breach of the U.S. Capitol?”

He asked, “Was she watching the same ‘overwhelmingly peaceful movement’ we were? The looting? The burning? Torching police cars? Randomly murdering police officers? All in the name of so-called ‘racial justice’? Please.”

To the contrary, in city after city, we saw police standing down and even fleeing from before the protestors. We saw police stations set on fire. And we saw a fraction of the people arrested who should have been arrested.

But let’s not even focus on these discrepancies here, since there has been more than enough hypocrisy on both the right and the left when it comes to reporting the race riots of 2020 and the storming of the Capitol on January 6.

And certainly, while the breach on the Capitol was hardly as violent as the race riots, it does stand out dramatically from the race riots, seeing that the Vice President and Congress were in the building, and this was, after all, the Capitol. Again, I share Mrs. Obama’s outrage and disgust that it happened.

But there is no possible justification for her call to ban Donald Trump from social media for life, not in the slightest. And for a woman of her stature even to suggest such things points to a very dark, very ominous, very dangerous potential future for America.

It could well be argued that Barack and Michelle Obama are the most influential couple on the planet, as reflected in their massive social media presence (just on Twitter, he has almost 128 million followers and she 19 million), their book sales, and their influence behind the scenes.

I therefore appeal to every person of conscience, both on the left and on the right, to reply to Michelle Obama’s suggestion with a firm and absolute “No!” That is not the kind of America in which any of us will thrive.

Scarily, Facebook and Instagram have already announced that Trump will be banned from their platforms “at least” through the inauguration.