Some Ironic (and Forgotten Words) from the Clarence Thomas Hearings

Michael Brown
|
Posted: Sep 29, 2018 12:01 AM
Share   Tweet
The opinions expressed by columnists are their own and do not necessarily represent the views of Townhall.com. 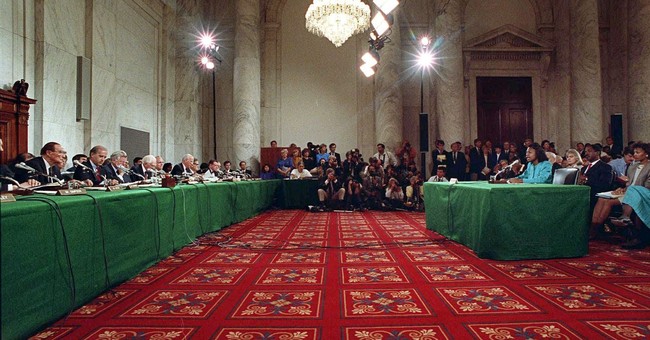 This past week was déjà vu time for everyone old enough to remember the Clarence Thomas-Anita Hill controversy. But in the midst of many striking parallels between the Senate Judiciary Committee hearings in 1991 and 2018, we have largely overlooked a very telling, quite ironic comment from Justice Thomas.

But first, some of the parallels.

Then, as today, there were two compelling stories.

Then, as today, there were two believable witnesses, a qualified male judge and a respected female professor.

Then, as today, there were charges of sexual impropriety.

Then, as today, there were concerns about political hit jobs.

Then, as today, the judge was a conservative nominated by a Republican president.

Then, as today, the woman was brought in by the Democrats.

Then, as today, the male judge was hailed as courageous for his impassioned denial of the charges against him.

Then, as today, the female professor was credited with helping to empower women who had suffered sexual abuse and harassment.

Then, as today, the woman was reluctant to come forward and wanted to preserve her anonymity.

Then, as today, the woman’s anonymity was compromised by leaks to the media.

Then, as today, the judge was considered to be a virtually certain appointee until the charges were leaked.

Then, as today, the man felt his reputation had been tarnished for life.

Then, as today, the man denied the accusations “unequivocally and categorically.”

Then, as today, the Republicans and Democrats voted along party lines.

Then, as today, the hearings were brutal.

Then, as today, the judge and the professor received death threats.

In fact, it was John Sununu, President George Bush’s chief of staff and a supporter of Thomas, who knew that Bush’s picking of a “true conservative” would result in a “knock-down, drag-out, bloody-knuckles, grass-roots fight.”

Yes, the parallels are beyond striking, as indicated by these comments from Thomas in 1991 when asked by Senator Joe Biden if Thomas had anything to say to the committee.

Thomas remarked, “I think that this today is a travesty. I think that it is disgusting. I think that this hearing should never occur in America,” referencing the “dirt” and “sleaze” that had been dug up (really, manufactured) against him “by staffers of members of this committee.”

He continued, “I think something is dreadfully wrong with this country when any person, any person in this free country would be subjected to this.”

Dreadfully wrong, indeed, and a sentiment echoed by Kavanaugh.

But here’s the sad irony of all this. We have not learned our lesson, and the hopes of Clarence Thomas were not realized.

It was Senator Orin Hatch who asked Thomas if he had expected to go through the particular hell he endured as a result of his nomination.

Thomas responded, “Senator, I expected it to be bad. And I expected the awful treatment throughout the process. . . . I expected to be a sitting duck for the interest groups. I expected them to attempt to kill me. And yes, I even expected personally attempts on my life. That’s just how much I expected.”

And then the words that are so sadly ironic.

Thomas said, “And if by going through this, another nominee in the future, or another American, won’t have to go through it, then so be it[my emphasis]. But I did not expect this treatment. And I did not expect to lose my name, my reputation, my integrity to do public service.”

Through the tidal wave of social media and endless news outlets, through our increasingly divisive politics, we are on the verge of tearing ourselves apart. And if the Thomas hearings could be likened to a “circus,” the Kavanaugh hearings can be likened to gladiatorial combat, with the bloodthirsty crowds cheering on. What in the world is coming next?

Nothing other than divine intervention will do. Nothing less than a great awakening will work.

So I pray, “Heavenly Father, have mercy on us, and come and heal and restore our broken nation.”

Can I hear an Amen?