The Brutal Truth About Persecution of Christians in China

Michael Brown
|
Posted: Sep 23, 2018 12:01 AM
Share   Tweet
The opinions expressed by columnists are their own and do not necessarily represent the views of Townhall.com. 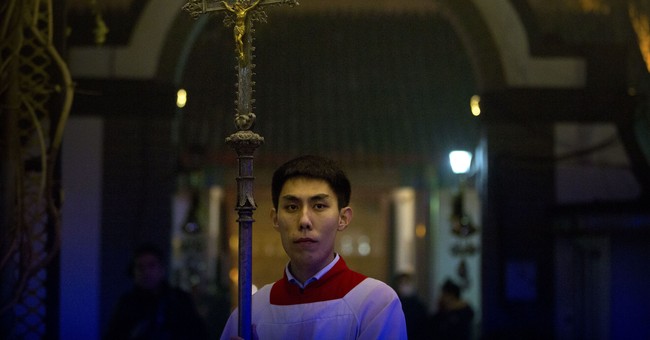 In recent months, there have been increasingly disturbing reports about the persecution of Christians in China. Last week, I received some firsthand information from very reliable friends who have lived in China for years. The news is not good at all.

After much research, these friends informed me that there were over 240,000 recorded examples of persecution in China in 2017, up from roughly 48,000 in 2016. This represents a very concerning spike in hostile activity.

According to my friends, “The government wants the world to see that China has reformed since the days of Mao. But there are other aspects of communism that they do not want us to see. It isn’t just about how the economy works.”

Specifically, “By 2020, the Communist Party will attempt to monitor its citizens through a massive surveillance system called China Skynet.

“China’s Skynet combines mobile phone GPS tracking, text message collection, 170 million security cameras, to make sure everyone is harmonious to make sure no one does anything illegal.

“China also controls the media.  There is the state-run media but private networks are censored. So, while China, today, barely resembles the Communist State of the 1950s and 1960s in terms of economic structure, it still retains almost all of the other aspects of Communism: state control, censorship and mass surveillance.”

According to the detailed report sent to me, the government has implemented a three-phase, 14-year plan:

“During the first 2-year phase, 2012-2014, it further eased persecution of the underground church, enticing more of them to surface and be identified.” (This would correspond with the time I was in China at the invitation of Franklin Graham. See here for my reflections.)

“During the second 2-year phase, 2014-2016, it invited and then pressured the identified underground churches to register and become Three-Self government churches.

“In the current third, 10-year phase, the gloves have come off as both the remaining underground churches and even Three Self churches are being persecuted using Mao-era brute-force, as well as mass surveillance, artificial intelligence, and big data.”

What, exactly, has been taking place? According to the report:

In addition to this, there are nationwide efforts to exalt the rule of President Xi (this has been reported in the west as well; see here), even in Mao-like terms. Xi has said that religion must be guided by the party to adapt to socialist society, and with that, the government-run churches have announced plans for the “Sinicization of Christianity.” Specifically, this refers to “bending Christianity to submit to the will of the Chinese Communist Party.”

In light of this ongoing crackdown on religious freedom in China, house church leaders are going back to underground practices and decentralizing their meetings. But the arm of the Chinese government is very strong, as a result of which my friends received this heart-rending letter from some of their Chinese colleagues (I have changed or removed names for obvious reasons):

“Things are getting tighter here now, everywhere is facing persecution now. Brothers and sisters are facing difficulties and suffering for their faith. My sister and her husband along with three others were put in jail for their gathering together with about 30 people and their stuff has been taken way with a few big trucks. They were beaten and shocked by the electronic sticks with head bleeding and arms in painful position. David their son saw what happened and cried and fainted there when it happened.

“We visited them four days after they were in jail. They were sick; my sister almost had a heart attack and her husband had gout which almost killed him. They were suffering physically and mentally.”

They were released after 10 days and told by local authorities they had to leave their city and district. All this for holding Christian meetings in China.

I’m aware that China can give the appearance of allowing religious freedom, and I’ve been told that the situation varies from province to province.

But what is clear is that millions of our brothers and sisters in that vast and important country are really suffering. Let us pray for them and for their government. And let’s ask our government to address this humanitarian crisis today.

This is the very least we can do.