The UN Security Council and Israel: A Tale of Two Presidents

Michael Brown
|
Posted: Dec 20, 2017 12:01 AM
Share   Tweet
The opinions expressed by columnists are their own and do not necessarily represent the views of Townhall.com. 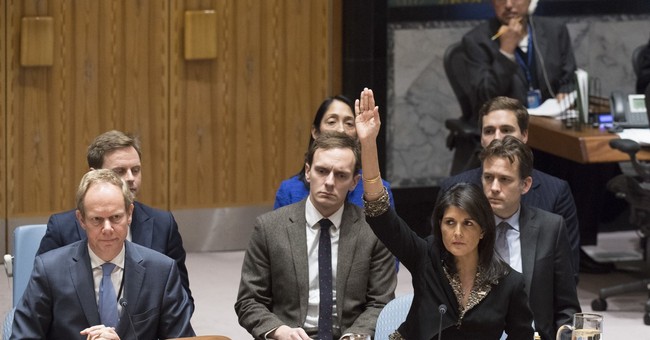 Last December, America failed to veto an anti-Israel resolution put forward by the UN Security Council, choosing to abstain and thereby allowing the 14-0 vote to prevail. This week, almost one year later, America vetoed another anti-Israel resolution put forward by the Security Council, thereby blocking the bill’s passage. The difference between 14-0 (with one abstention) and 14-1 is the difference between Obama and Trump.

The Times further explained that the text of the resolution called “on all states ‘to distinguish, in their relevant dealings, between the territory of the State of Israel and the territories occupied since 1967’ — language that Israel fears will lead to a surge in boycott and sanctions efforts, and that an Israeli official warned would provide ‘a tailwind for terror.’’

That’s why “Israeli minister Yuval Steinitz, speaking after the vote, said the US had ‘abandoned Israel, its only ally in the Middle East’ and said its behavior was not that of a friend.”

Given the icy relationship that existed between President Obama and Prime Minister Netanyahu, many took this abstention as a final slap in the face.

Regardless of what differences our nations may have had over the issue of settlements, the resolution, as put forward, called for a veto from the United States, and we let Israel down on that day.

Fast forward one year to December 18, 2017, and CNN reports, “US stands alone, defiant at UN Security Council over Jerusalem.”

Nikki Haley, our Ambassador to the UN, was clear and to the point, “Today for the simple act of deciding where to put our embassy, the United States was forced to defend its sovereignty. The record will reflect that we did so proudly.”

That’s the way to do it. Defy the absurd votes of the other nations, which have so often thrown Israel under the bus, and do it proudly.

“Today,” she continued, “for acknowledging a basic truth about the capital city of Israel, we are accused [by the Palestinians and others] of harming peace. The record will reflect that we reject that outrageous claim. For these reasons and with the best interest of both the Israeli and the Palestinian people firmly in mind, the United States votes no on this resolution.”

Exactly. America’s actions acknowledge reality (Jerusalem is, in every way, the functioning capital of Israel and, historically, its only capital), and acknowledging reality is the only way to advance real peace in the Middle East.

This is one reason that I voted for Donald Trump: I believed he would be a true friend of Israel, and he has not disappointed me so far. In contrast, this was one reason that I did not vote for Barack Obama: I feared he would not be a true friend of Israel, and in that regard, he lived up to my negative expectations. Last year’s UN abstention and this year’s UN veto say it all.

And while I do not support all of our president’s words and actions (there are times when I feel ashamed that he’s our president, although I continue to pray for him), I’m quite glad that he is our president on days like these, and this is why we take the good with the bad.

As for the UN Security Council, the Jewish Virtual Library observes that, “Since the early 1970s, the UN has become permeated with anti-Semitic and Anti-Zionist sentiment,” while, “A careful analysis of the Security Council’s actions on the Middle East . . . shows it has been little better than the General Assembly in its treatment of Israel.”

The 14-1 vote on the Jerusalem proposal is just another reminder of how anti-Zionist, if not anti-Semitic, that Security Council remains.

At times like this, it’s good to know that your country was the one country that said, “Not on my watch.”