While We Await the Court’s Ruling on Masterpiece Cakes, A Dose of Reality from India

Michael Brown
|
Posted: Dec 06, 2017 12:01 AM
Share   Tweet
The opinions expressed by columnists are their own and do not necessarily represent the views of Townhall.com. 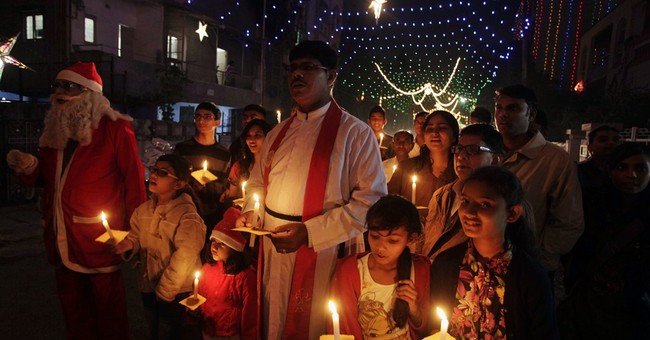 The Supreme Court has now heard the arguments in the Masterpiece Cakeshop case, a case that pits gay rights against religious rights. But a ruling is not expected until June 2018. That gives us plenty of time to ask ourselves, “Would I lose my livelihood because of my religious convictions? Am I willing to suffer for my faith?”

In America, an increasing number of Christians have answered yes to that question, including Jack Philips of Masterpiece Cakeshop. People like this should be commended for their steadfastness and should serve as examples to the rest of the Church: We show love to all, and we serve all unless we are called to violate our sacred convictions in that service. In that case, we politely decline, knowing there might be serious consequences.

At the same time, for the sake of our children and their children, we fight for our liberties, knowing that it is in the best interest of the Church and the nation to preserve those liberties.

Yet no one is holding a literal gun to our heads and threatening to kill us unless we deny Jesus. No one is threatening to behead our families if we refuse to compromise our convictions.

But in other parts of the world, like India from which I write these words, believers are paying with their lives.

For the last 25 years, beginning in 1993, I have traveled to India to work with Love-N-Care Ministries, presiding every year over their ministry school graduation, at which time we lay hands on the graduates and send them out to plant churches, especially in unreached areas.

Several years ago, one of their pastors was beaten to death by Hindu radicals, and some months later, I, along with others, literally washed the feet of this martyr’s widow. It was one of the most moving moments of my life. (This was the emotional, live broadcast I did from India later that week.)

At that same service, we met another widow and her daughter. Her husband, also a pastor, was beheaded with an ax, while she was forced to watch. He was killed by the Naxalites, radical Communists who are under constant attack by the government.

Just today, as some of the older pastors were sharing reports about the ministry’s work – Love-N-Care has planted more than 7,000 churches, along with built schools, hospitals, and other humanitarian works – I learned that several more of their tribal pastors had been killed. I was told the number is up to five now (if not more). And although the hardline Hindu government does not carry out these attacks, the violence is encouraged because of the government’s aggressive, anti-Christian policies.

Yet these Indian Christians are not complaining. They know that following Jesus can be costly, and they have already signed up to serve the Lord whether by life or by death.

My friend, Pastor Yesupadam, who leads the ministry here (and in other countries), told me that the tribal pastors, most of whom are barely in their 20s, will die without hesitation for the gospel. And Yesupadam, who himself was once stoned for preaching, will not hesitate to lay down his life for Jesus.

A few months back, he joined me on the radio with his Canadian wife, Monika. (His first wife, an Indian, died in the mid-1990s and had two children. He and Monika have been married about 20 years and have two children of their own.)

During that interview, Yesupadam spoke about the increased persecution in India and the possibility that he might have to take a stand for the Lord in his city, resulting in his death. He assured me that he was quite ready to do so.

When I asked Monika how she felt hearing those words, she replied calmly that, from the first day they talked about marriage, he told her that he could be martyred at any time. This is the reality she has had to live with.

Several years ago, one of the grads from our own ministry school in the States was killed by radical Muslims while serving in the Middle East. Since then, we have seen a sharp increase in our grads going to those parts of the world to reach Muslims with the good news of Jesus and to serve them in the midst of war and suffering. And around the world, every day of the week, our brothers and sisters are paying a tremendous price for their faith. Yet the Church continues to grow in the midst of suffering and pain and loss.

That same night in India when we washed the feet of the two widows, we also washed the feet of several dozen pastors who had been beaten for their faith or were being threatened for their faith. It was a sober time with lots of tears. Yet when that part of the meeting was over, the music began to change and, before you knew it, everyone was on their feet, and these men were literally dancing for joy. They were excited that they had the privilege of suffering for Jesus! (See Matthew 5:10-12, among many other passages.)

Of course, they also pray for their beloved India, that the government will have a change of heart and allow true religious freedoms, just as we pray for our Supreme Court and government in America.

But let us remember that it is a costly thing to follow Jesus. It might cost us our reputations, our freedoms, our incomes, and even our lives. So be it! If we lose our lives in this world, we gain them forever.