Can Our Universities Be Saved?

Michael Brown
|
Posted: May 30, 2017 10:35 AM
Share   Tweet
The opinions expressed by columnists are their own and do not necessarily represent the views of Townhall.com. 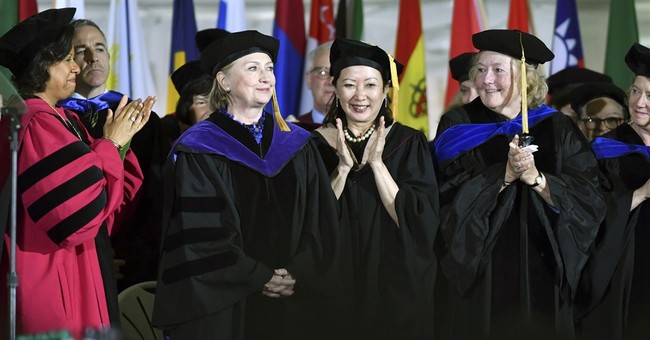 Where is the one place in America where free speech is commonly suppressed, where there is often as much indoctrination as education, and where radical-left ideologies reign almost unchallenged? It is our college and university campuses. Many of them have become so biased and extreme that even CNN’s Fareed Zakaria, hardly a conservative, excoriated their intolerance. Can our universities be saved?

We’re not just talking about the occasional educational faux pas, such as the embarrassing incident that occurred in 1989 when heavyweight boxer Mike Tyson received an honorary doctorate from Central State University in Ohio. Speaking at the graduation ceremony in cap and gown, Tyson remarked, “I wasn’t sure what kind of doctor I was, but looking at all the lovely sisters here, I think I’ll be a doctor of gynecology.”

No, we’re talking about a systematic dumbing down and radicalizing of our campuses.

Typical of the dumbing down of our schools was this comment from comedian Kumail Nanjiani, delivering the commencement speech at his alma mater, Grinnell College in Iowa. He said, “So here's another concrete piece of advice I can give you - have sex with an immigrant. We're going through a tough time right now and it would just be really great for morale.”

What great advice from a commencement speaker.

Typical of the radicalizing of our schools were these comments from Keeanga-Yamahtta Taylor, an assistant professor in African American studies at Princeton. Speaking at the graduation service for Hampshire College in Massachusetts, she referred to President Trump as “a racist, sexist megalomaniac.”

Regarding his policies, she said, “It is not enough just to be outraged. Injustice has to actually be defied.”

As for Attorney General Jeff Sessions, he “embraces and promulgates policies that have already proven to have had a devastating impact on black families and communities.”

It wouldn’t surprise me if most of the graduates didn’t consider her comments to be controversial at all. She was probably preaching to the choir.

This is the pattern at campuses across our country. As Katrina Trinko pointed out at the Daily Signal, “According to a new survey from Young America’s Foundation, top colleges invited 45 liberal commencement speakers this year … and a measly four conservatives.”

That’s more than a 10 to 1 ratio. This is shocking but not surprising.

Among those four conservatives was Vice President Mike Pence, speaking at Notre Dame University. Shamefully, about 100 graduates stood up and walked out as he spoke. What a scandal, and what a snapshot of the prevailing mentality at many of our elite schools.

Contrast this with the founding of some of our greatest universities, something I discuss in detail in my forthcoming book Saving a Sick America: A Prescription for Moral and Cultural Transformation. To give the smallest sampling here, Harvard University was founded in 1636 as Harvard College. Its purpose was, “To train a literate clergy.” Among the “Rules and Precepts” to be observed by the students was this: “Let every Student be plainly instructed, and earnestly pressed to consider well, the main end of his life and studies is, to know God and Jesus Christ which is eternal life.” That’s how Harvard started.

Princeton University was founded in 1746 as the College of New Jersey. The school’s motto was “Under God’s Power She Flourishes.”

Columbia University, was founded as King’s College in 1754 by a royal charter of King George II. It had as its goals to “enlarge the Mind, improve the Understanding, polish the whole Man, and qualify them to support the brightest Characters in all the elevated stations in life.”

As for commencement addresses, Cacey N. Nep at Politico wrote, “At Harvard’s first commencement in 1642, every single member of the graduating class gave an address in Greek, Hebrew or Latin. The commencement address was not singular, but plural, and those doing the addressing were not distinguished guests, but lowly graduates.” (There were 9 grads in total.)

Chew on that for a moment. Every graduate at Harvard in 1642 “gave an address in Greek, Hebrew or Latin.” And you can be sure that the faculty, if not every grad, understood every word of every speaker. Contrast that with Najiania’s joking call to have sex with an immigrant to boost morale. (You’d be even more shocked if you read about the moral requirements in the early days of Harvard.)

To repeat, then, my initial question: Can our universities be saved?

One of the chapters in Saving a Sick America is titled, “Reclaiming Our Schools and Learning How to Think Again.” In that chapter, I caution parents against sending their kids off to secular universities without clear purpose and preparation.

I also call for: 1) Christian universities to refuse to bow down to the god of secular academics, including the pressure that comes from accrediting boards. 2) Christian conservatives to do their best to get teaching and administrative positions at secular universities where they can challenge the status quo. 3) More and more conservative Christian schools to be raised up to help train and equip the next generation.

The challenge is certainly great, but we really have no other choice. If we ignore the crisis, things will only get worse. If we throw in the towel in despair, then we effectively surrender the souls of the next generation, which is our greatest treasure.

Over 40 years ago, Larry Norman, a pioneer Christian rocked musician asked the question, “Why should the devil have all the good music?”

Today, I’m asking the question, “Why should the left have (almost) all the good schools?”