What This Campus Has Done Is Beyond Stupid

Michael Brown
|
Posted: Mar 14, 2017 9:21 AM
Share   Tweet
The opinions expressed by columnists are their own and do not necessarily represent the views of Townhall.com. 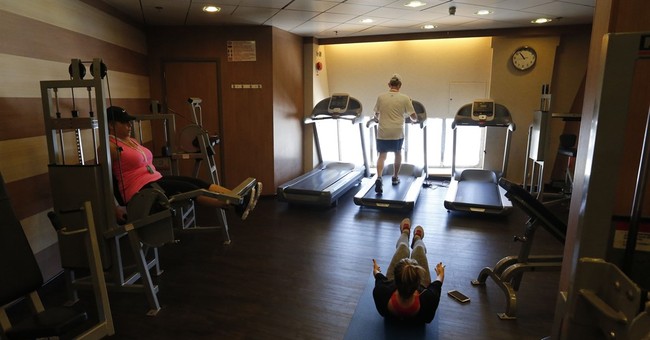 This is not fake news. What you’re about to read really happened – and at a college campus at that. Yes, “Administrators at Carleton University have removed the bathroom scales from the campus gym, claiming that ‘being fixated on weight’ does not ‘have any positive affect [sic] on your health.’”

Seriously? This took place on a university campus, a place of higher learning, a place of mental stretching and emotional growth – at least in theory?

Well, if we are to follow the school’s line of reasoning, then why not close the doors to the campus gym entirely, since being fixated on fitness can produce body anxiety?

And why not ban academic exams, since being fixated on grades can produce emotional stress?

And why not ban all sports competition, since being fixated on winning can produce pride or depression or a false sense of worth?

And why not ban graduation, since being fixated on earning a degree can produce a sense of shame for those who drop out?

As crazy as all this sounds – and as crazy as my examples are meant to be – Tom Ciccotta reports that, “Recently, community advisors at Bucknell University covered up mirrors in at least one residential hall to promote body positivity.”

Maybe my examples are not so farfetched after all?

Actually, in more and more children’s schools, scores are not kept during games so that everyone can be a winner. (See here and here for examples.) This prompted one journalist to ask, “Today's kids live in a world of scoreless games and trophies for everyone. When we cushion them from defeat at the early ages, are they less prepared to cope when real competition kicks in?”

Perhaps the next thing will be to ban grades in children’s schools as well?

Back at Carlton University, Cicotta tells us that “freshman Samar El Faki lambasted those who disagree with the decision to remove the scales as ‘insensitive.’ ‘Scales are very triggering,’ she said. ‘I think people [who disagree with taking it out] are being insensitive because they simply don’t understand. They think eating disorders are a choice when they are actually a serious illness.’”

Personally, I have the utmost sympathy for those who struggle with being overweight, especially for those who have struggled all their lives. And we know how deadly obesity can be, especially when it starts in childhood, making this a tremendously serious issue.

We also live in a society in which everyone is expected to have some kind of perfect, air-brushed body, and we put way too much emphasis on physical appearance. I’m quite aware of that as well.

But the idea that having scales in a gym is “very triggering” is absolute nonsense.

First, when you’re overweight and in a gym, you’re quite aware of your girth – you’re more likely to wear loose fitting clothes and to be embarrassed at your weight when compared to others – so you hardly need a scale to “trigger” you. You’re in the gym to get fit, so that’s your starting point, and the heavier you are, the more you’re aware of the need to change.

Do we therefore avoid reality because it is too triggering? (I guess the folks at Bucknell have already answered this: Yes, remove the mirrors lest we see what we really look like!)

A few months ago, while on the road speaking, I worked out at a local gym with my assistant, who’s in his early 30s (I turn 62 this week). There were mirrors everywhere (and I mean everywhere), so it was impossible to avoid seeing yourself, so it wasn’t hard to notice that, by far, I was the oldest guy in the gym.

Thankfully, I’m in great shape for my age, but I still felt like an old man when I looked around. The solution, though, was not to smash the mirrors or run out of the place. The solution was to say, “Yup, I’m getting older, which is all the more reason to work out even harder, so I can get in even better shape and be an even better steward of my body.”

That’s called getting triggered by reality, and that’s a good thing, not a bad thing.

In years past, when I was overweight, I would avoid getting on the scale because I didn’t want to face reality. It was too discouraging!

But there was no denying that my clothes were getting tighter and that my blood pressure was getting higher, and to deny these facts was to deny reality, thereby endangering my health. (There’s a reason that high blood pressure is called the silent killer.)

So, to the students at Carlton and Bucknell, here’s a word of wisdom: It’s better to let reality trigger you into action than to put your head in the sand and live in denial.

That can be downright deadly, not to mention downright stupid.