Michael Brown
|
Posted: Feb 17, 2017 12:01 AM
Share   Tweet
The opinions expressed by columnists are their own and do not necessarily represent the views of Townhall.com. 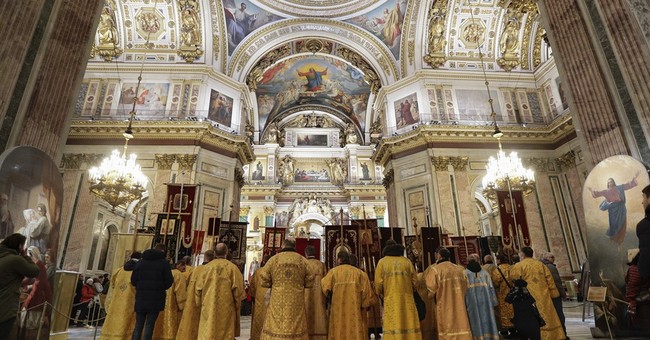 There is only one thing more appalling than the Washington Supreme Court’s 9-0 ruling against religious liberty on Friday. It is the silence of Christian leaders across America, leaders who choose convenience over confrontation, leaders who would rather be popular than prophetic, leaders who prefer the favor of people over the favor of God. Shame on these silent leaders. Today is a day to stand.

There are, of course, the handful of expected Christian voices protesting the court’s outrageous decision, as these justices ruled unanimously against florist Barronelle Stutzman, claiming that she discriminated against a longtime gay customer (named Robert Ingersoll) when she told him she couldn’t make the floral arrangement for his upcoming gay “wedding,” despite the fact that she had served him for years and despite her recommending three other florists who could do the arrangements for his wedding.

Instead, the court ruled that this 72-year-old grandmother who had employed gay workers and served gay customers for years, was required by law to participate in a gay wedding, even though this constituted a direct violation of her religious beliefs – beliefs which have been consistent and almost universally held among Christians for the last 2,000 years.

Not only so, but the court upheld the attack on her personal assets as well – her house, her savings, her retirement funds – by requiring her “to pay the attorneys’ fees that the ACLU racked up in suing her,” fees which could reach as high as one million dollars.

Previously, when Washington Attorney General Bob Ferguson, an aggressive liberal who brought the suit against Barronnelle, “announced he would accept $2,000 in penalties, $1 in fees and costs, plus an agreement not to discriminate in the future and to end further litigation,” Barronnelle rejected the proposed settlement.

She explained, “Your offer reveals that you don’t really understand me or what this conflict is all about. It’s about freedom, not money. I certainly don’t relish the idea of losing my business, my home, and everything else that your lawsuit threatens to take from my family, but my freedom to honor God in doing what I do best is more important. Washington’s constitution guarantees us ‘freedom of conscience in all matters of religious sentiment.’ I cannot sell that precious freedom. You are asking me to walk in the way of a well-known betrayer, one who sold something of infinite worth for 30 pieces of silver. That is something I will not do.”

She continued, “I pray that you reconsider your position. I kindly served Rob for nearly a decade and would gladly continue to do so. I truly want the best for my friend. I’ve also employed and served many members of the LGBT community, and I will continue to do so regardless of what happens with this case. You chose to attack my faith and pursue this not simply as a matter of law, but to threaten my very means of working, eating, and having a home. If you are serious about clarifying the law, then I urge you to drop your claims against my home, business, and other assets and pursue the legal claims through the appeal process.”

Today, on my radio show, shortly after the ruling was announced and with the full weight of the state’s ruling hanging over her head, she told me would do the same thing again (stating that when God changes His Word, she will change her mind), also stating without the slightest trace of bitterness that she would gladly serve Robert Ingersoll should he come into her store today.

Friends, what we are witnessing today is a breathtaking abuse of power, an extreme overreach by the government, a shocking example of LGBT activism out of control, yet over the next 7 days, church services will come and go without a word being spoken, and over the next 48 hours, the Christian blogosphere will remain relatively quiet. How can this be?

In the aftermath of the Holocaust, courageous Christian leader Basilea Schlink rebuked the silence of Christians immediately after Kristallnacht, the Night of Broken Glass (November 9, 1938), when the Nazis set synagogues on fire and vandalized Jewish places of business, also killing and beating some Jewish victims as well. And while I am not comparing gay activists and their allies to Nazis and I am not comparing the Washington court’s ruling to Kristallnacht, I am comparing the silence of Christians then and now.

Schlink wrote, “We are personally to blame. We all have to admit that if we, the entire Christian community, had stood up as one man and if, after the burning of the synagogues, we had gone out on the streets and voiced our disapproval, rung the church bells, and somehow boycotted the actions of the S.S., the Devil’s vassals would probably not have been at such liberty to pursue their evil schemes. But we lacked the ardor of love – love that is never passive, love that cannot bear it when its fellowmen are in misery, particularly when they are subjected to such appalling treatment and tortured to death. Indeed, if we had loved God, we would not have endured seeing those houses of God set ablaze; and holy, divine wrath would have filled our souls. . . . Oh, that we as Germans and as Christians would stand aghast and cry out ever anew, ‘What have we done!’ At every further evidence of our guilt may we repeat the cry.” (From her book Israel, My Chosen People: A German Confession Before God and the Jews.)

What adds to the tragic irony of the moment is that in recent weeks, designers have said they will no longer work with Melania Trump and stores have dropped Ivanka Trump product lines, not because of deeply held religious beliefs, which are explicitly protected by the First Amendment, but because of political differences. And these companies and individuals are being praised by liberal Americans for standing on their convictions. But when a Christian florist politely declines a gay couple’s request to design the floral arrangements for their “wedding” ceremony, she is taken to court and threatened with the loss of her business and all her personal assets.

Where is the righteous Christian indignation? And where are the bleeding-heart liberals who claim to care about the persecuted underdog? (Remember: The ACLU with its massive resources is leading the charge against Barronnelle.)

I can respect Christian leaders who try to stay out of the culture wars because they don’t want to drive their LGBT neighbors and friends away from the gospel – as long as they speak up at times like this, when our fundamental liberties are being trashed and when a gracious Christian grandmother is being savaged by the state. But should they remain silent at a time like this, the next time they raise their voices on behalf of the LGBT community (and against the conservative evangelicals they so frequently attack) they will be shouting one message to the world: “I am a hypocritical coward!”

Let me urge you, then, to do three things: 1) share this article with others to help spread the word; 2) make a statement about this gross injustice however you can (on social media; to your family; from your pulpit – I’m urging every pastor reading this column to say something to your flock the next opportunity you have); 3) go to this website to stand with Barronnelle and her team; 4) pray for God to awaken the Church of America.

Will you take a stand today?