Why Can’t I Marry the Robot I Love? The Rise of Robosexuals

Michael Brown
|
Posted: Dec 24, 2016 12:01 AM
Share   Tweet
The opinions expressed by columnists are their own and do not necessarily represent the views of Townhall.com. 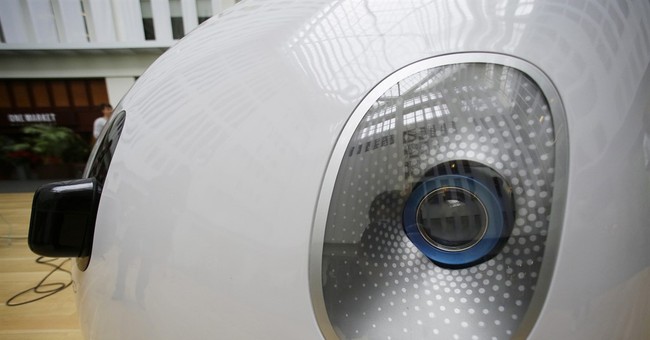 Do people have the right to marry the one they love, even if the one they love is a robot? If not, why not? After all, in the words of Lilly from France, who has fallen in love with her robot, “We don’t hurt anybody, we are just happy.”

Isn’t that what matters in the end, that people are happy?

Lilly calls herself a “proud robosexual,” and she fully plans on marrying her robot, whom she named InMoovator.

As explained in the Daily Mail, “Lilly is reportedly engaged to the robot and says they will marry when human-robot marriage is legalised in France.”

But why should this surprise us? People have not only married their same-sex spouses (which has the merit of joining together fellow-humans, albeit completely opposite to the God-ordained male-female pattern), but they have married animals and inanimate objects and, with increasing frequency, married themselves.

Indeed, it was just a few days ago that Good Housekeeping – not some radical, far-out, tabloid – ran the story, “WHY I MARRIED MYSELF. Self-marriage is a small but growing movement around the world.”

The article speaks at length  (and with seriousness) about “solo weddings” and references people like Dominique, who “is a self-marriage counselor and minister, offering services including consulting sessions and private ceremonies through her website, Self Marriage Ceremonies, which she runs from her home in northern California.”

The article also include self-marriage vows like these: “I will never leave myself.” “I promise to ask for help when I'm suffering.” “I promise to look in the mirror every day and be grateful.” “I promise to give you the incredible life that you long for.”

If, then, you can “marry” yourself – I ask again, why not, since you’re not hurting anyone, which has been one of the loudest arguments used by advocates of same-sex “marriage” – why can’t you marry a robot? At least the robot can provide both companionship and unflinching loyalty, also helping to lighten your daily load by performing some menial chores. And now, in ever increasing measure, robots can provide sex as well.

Just yesterday, the BBC ran a story in its Technology section called “Sex robots: Experts debate the rise of the love droids.”

The article begins with these words: “Would you have sex with a robot? Would you marry one? Would a robot have the right to say no to such a union?

“These were just a few of the questions being asked at the second Love and Sex with Robots conference hastily rearranged at Goldsmiths University in London after the government in Malaysia - the original location - banned it.”

Yes, this was a subject of a conference at a London university, and it ended with a speech by Dr. David Levy, who said, “We have companion robots and a partner robot is the logical continuation of the trend.

“In the next 10 years it is perfectly achievable in software to create a robot companion that is everything that people might want in a spouse - patient, kind, loving, trusting, respectful and uncomplaining,” he said.

“{However] some enjoy the friction of a relationship and may want to marry an aggressive robot, some people would find that exciting.”

In light of these arguments, not to mention the personal story of Lilly (among others of like mind), I can think of only reason anyone would oppose robot marriage: robophobia. (Please forgive the sarcasm.) After all, robot marriage harms no one, robot marriage makes people happy, and perhaps robot marriage will even help bring sexual release to people who might otherwise show their aggression in socially harmful ways. And surely, in an increasingly robophilic world, I do not want to be categorized as robophobic. I’m no robophobe!

In all seriousness, I do understand that some people are very lonely and that, just like they can build deep bonds with their pets, they can build deep bonds with their (increasingly animated) robot companions. And I certainly make a clear distinction between gay “marriage” (which I recognize as potentially loving and committed, even while I reject it as real marriage) and robot “marriage.”

But all this simply underscores the point that marriage advocates like myself have made over and again for years: Once you redefine marriage you render it meaningless. As further evidence I now present to you robot marriage.

And if you say in protest, “But marriage is the union of two people,” I reply, “Who said that it’s limited to two people or that it even requires two people?”

The fact is that once you move marriage away from its divinely intended, one man-one woman union for life, you open the door to virtually anything, including robot marriage.