Factoring Israel into Your Voting Decision

Michael Brown
|
Posted: Nov 07, 2016 12:01 AM
Share   Tweet
The opinions expressed by columnists are their own and do not necessarily represent the views of Townhall.com. 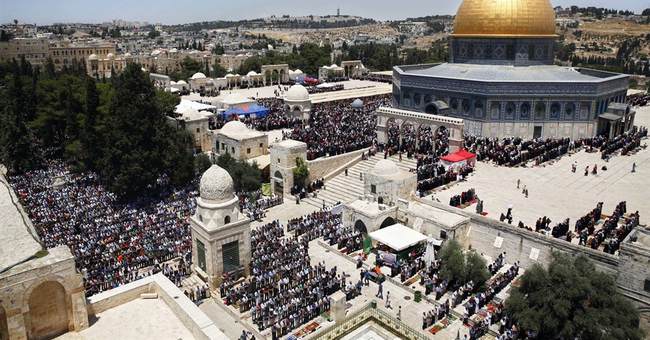 God certainly has his ways of getting our attention, and He got my attention this past Saturday night when I was speaking at a pre-election conference at a church in Lakeland, Florida.

The pastor and his wife have three small children, the middle one being a boy named Israel, just three years old.

His grandmother, the pastor’s mother-in-law, was babysitting for him and his sister at the pastor’s house, when suddenly, to her shock, the boy was nowhere to be found.

She tried calling her son-in-law and daughter, who were at the church service, finally reaching them on the fourth try.

“Israel is missing!” she exclaimed, as they jumped in their car to head home, calling 911 on the way.

At this time, the night service was now over,  and I was waiting for the pastor to drive me back to the hotel, but he had disappeared and was nowhere to be found. That’s when a church worker came up to me and said, “I’ll be driving you back,” explaining to me that the pastor had received a message that “Israel is missing.”

Thankfully, by then, he had been found, asleep in his own bed.

Apparently, he had wandered somewhere else in the house, falling asleep in a closet or in the garage, somehow evading his frantically searching grandmother, only to find his way back to his bed and to a quiet night’s sleep.

But those words “Israel is missing” kept ringing in my ears, and when I woke up Sunday morning, reflecting on whether I should speak on Israel and the elections, there was an Amber Alert on my phone for a missing child in the area (obviously, not for little Israel, but the coincidence of the moment was not to be missed).

This certainly got my attention.

But given the importance of America’s relationship with Israel, I didn’t need any kind of special sign to focus on the subject, since I honestly believe that God judges nations, in part, based on how they treat Israel.

Now, before you write me off as some kind of hyper-spiritual, Zionist nut case, let me explain what I do and do not mean. (For those of you who don’t believe the Bible is God’s Word, then I’m already a hyper-spiritual nut case in your eyes. No problem!)

First, standing with Israel does not mean standing against the Palestinians or sanctioning everything Israel does.

Second, if a country stands with Israel, that does not give that country some kind of magic pass because of which God will overlook all their transgressions.

Third, we stand with Israel despite Israel’s shortcomings, not because Israel is perfect (far from it).

That being said, I believe the ancient principle spoken first to Abraham, then to his grandson Jacob, then to the nation of Israel as a whole, still applies today, namely, that God blesses those who bless Israel and curses those who curse Israel (see Genesis 12:3; 27:29; Numbers 24:9).

How has this worked out historically?

In Jeremiah 30:11, the Lord said to Israel, “For I am with you to save you, declares the LORD; I will make a full end of all the nations among whom I scattered you, but of you I will not make a full end. I will discipline you in just measure, and I will by no means leave you unpunished.”

Looking back, we can see that Assyria and Babylon, the mighty empires that exiled Israel and Judah in the 8th and 6th centuries, ceased to exist in the centuries that followed, while the nation of Germany suffered horrific defeat in war and was divided for decades after the Holocaust.

Are these just coincidences? I think not.

Derek Prince, an Oxford-trained, British Bible teacher (1915-2003), noted many years ago that, “Britain emerged victorious from two World Wars, retaining intact an empire that was perhaps the most extensive in human history. But in 1947–8, as the mandatory power over Palestine, Britain opposed and attempted to thwart the rebirth of Israel as a sovereign nation with her own state.” (At that time, Prince was living in Jerusalem, and so he spoke “as an eyewitness of what actually took place.”)

In his words, “From that very moment in history, Britain’s empire underwent a process of decline and disintegration so rapid and total that it cannot be accounted for merely by the relevant political, military or economic factors. Today, less than a generation later, Britain—like Spain—is a struggling, second-rate power.”

It’s for you to decide whether you believe any of this, but in my humble opinion, even though America helps Israel every year with billions of dollars of military aid, I believe America needs Israel more than Israel needs America.

And since the Republican platform is much stronger on Israel than is the Democratic platform (this seems to reflect the views of Trump-Pence vs. Clinton-Kaine as well), that’s another strong reason I will vote for Trump-Pence on Tuesday, despite Mr. Trump’s many obvious and serious flaws.