Michael Brown
|
Posted: Mar 13, 2016 12:01 AM
Share   Tweet
The opinions expressed by columnists are their own and do not necessarily represent the views of Townhall.com. 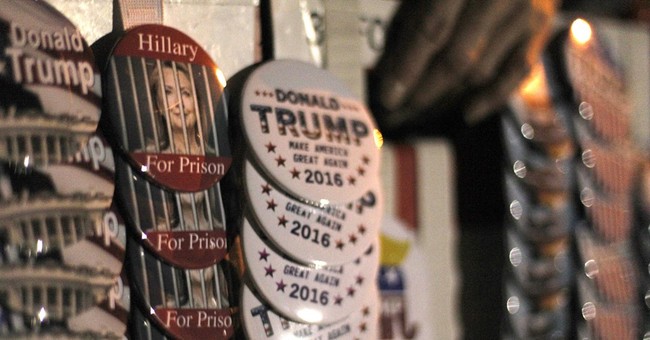 Let me make three unequivocal statements about the wave of protests and violence at recent Donald Trump events.

Second, the protesters that shut down the Friday night Trump rally in Chicago were not just anti-Trump. It appears that many of them were ultra-liberal and would be no friends of the conservative movement as a whole.

Third, Trump bears some responsibility for these outbreaks because of his inflammatory and irresponsible rhetoric.

As Senator Marco Rubio stated, words have consequences, and you cannot run for the highest office in the land and be so irresponsible with your speech without expecting unfortunate results.

Again, this does not justify the spirit of the protesters, but it does illustrate that, for the most part, Trump is bringing out the worst in Americans, not the best, and this is hardly the way to make America great again.

Last August, in an Open Letter to Donald Trump meant to be constructive rather than destructive, I wrote, “Why shoot yourself in the foot when you have a legitimate chance of becoming the President of the United States?

I continued, “I’m not a defender of Fox News or Megyn Kelly (or some others whom you have attacked), but if you spoke the truth with civility, stating your viewpoint plainly and without equivocation but without the gutter-level attacks, you’d make a whole lot less enemies.”

Can anyone argue with this now?

Last December I wrote, “The Scriptures teach that out of the abundance of the heart the mouth speaks (Luke 6:45), and so Trump's consistent pattern of reckless speech points to deeper issues which could make him unfit for the office of the presidency.”

I added: “The warnings in Proverbs are strong: ‘Do you see a man who is hasty in his words? There is more hope for a fool than for him’ (Proverbs 29:20). And, ‘A fool gives full vent to his spirit, but a wise man quietly holds it back’ (Proverbs 29:11).”

Today, we are seeing some of the negative fruit of Mr. Trump’s irresponsible and incendiary rhetoric, and things could get much worse in a hurry, especially when he continues to make provocative comments.

And can you imagine what could happen with our relationship to other nations if Donald Trump became president? Could you imagine what unnecessary, violent hostility could be needlessly provoked against Americans around the world, not to mention what larger, anti-American actions could be provoked?

Earlier in the day last Friday, just hours before the Chicago protest and while waiting for protesters to be removed from his really, Trump remarked unhappily that “. . . part of the problem and part of the reason it takes so long is no one wants to hurt each other anymore and they’re being politically correct the way they take them out so it takes a little longer.”

So, it would have been better for police to smash non-violent protesters over the head with a night stick or something like that? Perhaps to rough them up a little and teach them a lesson? And the only reason the police don’t do that is because they’re being “politically correct”?

It should be obvious to see how this kind of speech is so dangerous, especially when many Americans are already concerned about their own safety and are fearful about Islamic terrorism and angry with a weak government.

Couple this with Trump’s oft-quoted comments about wanting to punch protesters in the face or wishing that the crowd would rough them up, assuring his people that he’d foot the legal bill, and you have a potent recipe for disaster.

Last week, one of his supporters sucker punched a protester in the face as he was being escorted out of the building, but in light of Trump’s previous statements, is it any surprise?

Trump had said: “So if you see somebody getting ready to throw a tomato, knock the crap out of 'em, would you? Seriously. Okay? Just knock the hell — I promise you, I will pay for the legal fees. I promise. I promise.”

Yes, do this if you see someone about to throw a tomato – hardly a deadly or dangerous weapon – and yet Trump won’t back down from his words or take any responsibility for them.

At another rally, as a protester was being led out, “Trump lamented that he wasn't closer. ‘I’d like to punch him in the face, I tell ya,’ he said.”

This is reckless, and if Donald Trump wants to be our next president and commander-in-chief, he needs to apologize for these statements, renounce them, and step higher.

Unfortunately, even in his stated policies, his words are often incendiary, not just by broad-brushing his statements, only to nuance them slightly later (for example, regarding Mexican illegal immigrants or Muslims), but by saying that the best way to fight terrorism is to be similar to the terrorists (like ISIS).

In his own words, “We have to play the game the way they're playing the game. You're not going to win if we're soft and they're, they have no rules.”

The truth be told, if we become like ISIS we are no better than ISIS, and if we intentionally target and kill the families of terrorists – including small children – we are terrorists ourselves.

We can be strong and powerful and strike deadly fear into the hearts of our enemies without becoming like them.

We can also look evil in the face, as Ronald Reagan did, and say, “Mr. Gorbachev, tear down this wall!” without engaging in personal insults.

Reagan did not make fun of Gorbachev’s famous birthmark, nor did he ridicule him as Lyin’ Mikhael or Little Gorbie, nor did he call out the “Filthy Commies” or the like.

Instead, he spoke truth to power, with precision and without fear, and the Iron Curtain, along with the Berlin Wall, came tumbling down.

That’s the kind of strong leadership we need today, and I actually believe that, if Donald Trump could have a fundamental heart change, he could be a leader like that.

Right now, though, his angry, irresponsible rhetoric is doing much more harm than good. The sooner he and his supporters realize that, the better.