Donald Trump the Vacillator in Chief

Michael Brown
|
Posted: Feb 26, 2016 9:35 AM
Share   Tweet
The opinions expressed by columnists are their own and do not necessarily represent the views of Townhall.com. 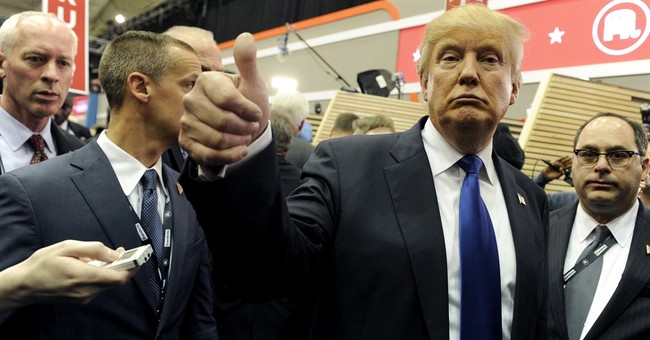 If Donald Trump ends up being our next president, I will pray that he will be the greatest president we have ever had and I will fervently hope that I’m absolutely wrong about all of my concerns. Until then (or at least until we decide on the Republican nominee), I will sound the alarm and raise my voice as loudly and clearly as I can.

Do not be duped by Donald Trump!

The issue is not whether he’s a true Christian.

The issue is whether he can be trusted and whether we even know what his real positions are.

So I ask you, if you are a Trump supporter, with all respect for your zeal and with affirmation of your frustration with status-quo politics, how can you know what Trump really believes or what he will actually do if elected?

He changes his views from one day to the next – sometimes diametrically – and flatly contradicts his previous positions, then insults and mocks those who challenge him, often in the most puerile ways. No other candidate in memory – perhaps in our nation’s history – has vacillated so wildly and dramatically in such a short period of time.

Trump truly is the vacillator-in-chief.

Let’s remember that we’re talking about who will be the next president of the United States, arguably the most powerful person in the world, so this is not the time for blind loyalty. The stakes are very high.

Please look at the facts honestly, and if you have the courage, look at them through the eyes of a critic or skeptic.

Last week on MSNBC, when pressed by Joe Scarborough, he pledged to stay neutral on the Israeli-Palestinian conflict until elected president, not only an ambiguous answer but a weak answer. Less than seven days later, speaking at Regent University, he pledged “100% support” for Israel.

Which position, if either is true? What will Trump do if elected? Who knows?

Trump is either lying or vacillating or both, but either way, he’s untrustworthy.

Earlier this month, when asked by Chris Wallace on Fox News if he would nominate Supreme Court justices who supported overturning the Obergefell decision which redefined marriage, Trump said he would “strongly consider” it. Less than one week later, he assured a lesbian reporter that under his administration, there would be great progress for LGBT Americans.

When pressed by ABC’s George Stephanopoulos as to how both of these positions could be true at the same time, he answered (to paraphrase), “Well, it’s a long way off, George, but trust me. We’re going to have great judges and everybody will love them.”

This prompted the gay, PinkNews website to opine, “It’s all very clear: if you’re a lesbian voter he will support your marriage, but if you’re an evangelical voter he’ll oppose lesbian marriage. If you ask on Fox News then he will absolutely consider it, but if you ask on NBC then he hasn’t decided whether he will decide to decide yet.”

Trump also vacillated wildly when asked whether his sister (of pro-partial birth abortion fame) should be nominated as a Supreme Court justice including: yes; no; I was joking; I wasn’t joking; I have no idea what she believes. (This is a partial, very rough summary.) Then add to the mix that, in 2000 he

And the list goes on and on, almost endlessly.

During Thursday night’s debate, Leon Wolf tweeted this quote from Trump: “I have great respect for Justice Scalia,” followed by, “Trump Less than 5 months ago . . . slammed Scalia for not supporting affirmative action.”

Others called him out during the debating for

So, not only did he deny ever discussing the subject – either an outright lie or an example of a terrible memory – but he also reversed his earlier position.

Then there are his contradictory statements on government funded health-care, Planned Parenthood, and a host of other important subjects.

As Dr. Bunsen Honeydew (@DunsScottus) tweeted during the debate, “Trump is actually just Sanders in a toupee. ‘I'm gonna give you coverage for pre-existing conditions but no individual mandate.’ Magic!”

Not surprisingly, immediately after the debate, the Cruz campaign released a video from the debate, where, in answer to Cruz’s “true or false” question, Trump said it was “false” that he ever said that the government should pay for everyone’s health care. This was followed by a clip from Trump’s September 27, 2015, 60 Minutes interview in which he stated emphatically that, “The government’s gonna pay for it.”

Speaking of Cruz, let’s not forget Trump’s vacillating comments on him, ranging from: he’s “a little bit of a maniac” to “he has a wonderful temperament, he’s just fine, don’t worry about it,” back to he’s a “Very nasty guy,” a “total hypocrite,” a “liar,” and “a very unstable guy” (all in the course of a month).

Shall we also mention Trump’s completely absurd statements, such as his suggestion after the debate that “maybe” he’s being audited because he’s “a strong Christian”?

Or what of Trump’s righteous indignation over former Mexican president Vincente Fox that Mexico is "not going to pay" for that “f----ing wall?” He said to Wolf Blitzer during the debate, “This guy used a filthy, disgusting word on television, and he should be ashamed of himself, and he should apologize, OK?” And he said this with a straight face.

And in a post-debate interview with Chris Cuomo he actually said, “And I could tell you I would not use that word, but if I did use that word, uh, I probably wouldn’t have even been allowed on the stage tonight.”

This prompted Cuomo to laughingly respond, “You do understand there’s a touch of irony in that . . . .” To say the least!

What’s really sad, though, is the response from his supporters, even when he’s exposed.

I posted this on my Facebook page after the debate: “Come on Trump supporters! Wake up and face reality. You cannot believe what this man says -- unless you really believe he's being audited because he's a strong Christian. Stop drinking the Kool-Aid!”

“Ur a moron and as evil as Obama is.”

“And ur a Christian. U prove my point because ur not just a money hog or prob will burn in hell Ur a Christian. Hahaha. Maybe so is Obama Yep same cockroaches”

And there was this truly insightful comment: “I spoke to a Trump supporter today and he told me, ‘it's part of life to flip flop on issues because your learning new things every day.’” Unreal.

One day earlier, I had conducted a poll on Twitter in which the vast majority of those who responded said that, of Trump, Cruz, Rubio, or Carson, it was Trump who was the least honest. In response to this, the “Trump Revolution” tweeted back, “Bad poll. Trump is the most honest!"

@DrMichaelLBrown @CaraKeith22 Bad poll. Trump is the most honest! ??????

As I said two weeks ago, Trump could say he’s been lying all along and his supporters would commend him for his honesty.

And so, Trump can decisively lose a debate to Marco Rubio and Ted Cruz with headlines proclaiming, “Donald Trump Was Badly Exposed,” yet his followers, who apparently dominate Drudge Report, can crown him the overwhelming victor. (When checked at 3:00 AM, EST, the Drudge voters gave Trump 60% of the vote with a combined 34% going to Cruz and Rubio.)

May I make one more appeal for sober reflection and sanity?