Is Donald Trump a Double-minded Man?

Michael Brown
|
Posted: Jan 18, 2016 8:59 AM
Share   Tweet
The opinions expressed by columnists are their own and do not necessarily represent the views of Townhall.com. 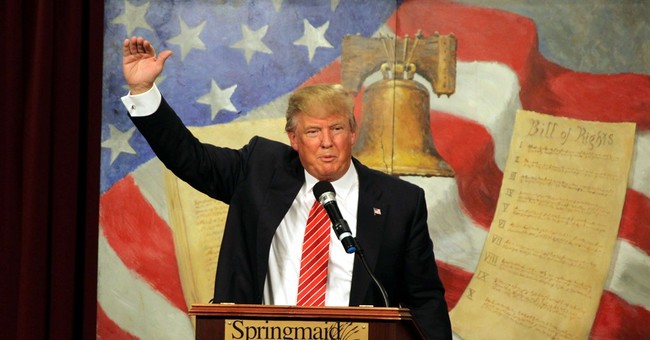 But when a political leader completely flip-flops on issues and then flip-flops again, the trustworthiness of that leader must be questioned.

Does Donald Trump fit the description of a double-minded, untrustworthy leader?

Trump claims that his views on abortion changed based on personal experience.

Let’s give him the benefit of the doubt, although at best, he is still not a strong, consistent pro-life candidate.

He has also taken a more negative stance on gay issues than he did in the past (although at no time did he fully support same-sex “marriage”). Is this simply a calculated political shift in order to win the Republican nomination?

Perhaps, but once again, let’s give him the benefit of the doubt, although here too, he is hardly an articulate champion of conservative moral values.

Other shifts in his views cannot be so easily explained.

As Time Magazine reported July 17, 2015, last year Donald Trump called Hillary Clinton the “worst Secretary of State in the history of the United States,” and a “desperate” and “sad” candidate.

Trump’s insults this year have gotten even worse, to the point of him calling Hillary’s bathroom break during a presidential debate “disgusting.” And that is only the tip of the iceberg.

Trump is also renting out a theater in Iowa so voters can see the new movie “13 Hours: The Secret Soldiers of Benghazi” for free. According to a Trump spokesperson, “Mr. Trump would like all Americans to know the truth about what happened at Benghazi.”

Contrast this with Trump’s comments in 2007 when Hillary was running for president on the Democrat side while Rudy Guiliani was running on the Republican side.

Trump said he was torn between them, stating, “They’re both terrific people, and I hope they both get the nomination.”

Yes, these were the words of Donald Trump.

As to Hillary’s record as Secretary of State, Trump opined on Live Leak that she probably did “above and beyond everybody else and everything else.”

He also dismissed the importance of Benghazi and said that, if Hillary ran again for office, he was “sure” she would do a “good job” of defending her record as Secretary of State.

Is this not a glaring example of being double-minded?

How do you trust the words of someone who one day says that Hillary did her job as Secretary State “above and beyond everybody else and everything else” and another day brands her the “worst Secretary of State in the history of the United States”?

For another glaring example, consider how Trump has flipped, then flopped, then flipped again in terms of his evaluation of Ted Cruz.

On December 13, 2015, Trump stated that Cruz has acted like “a little bit of a maniac” in the Senate and doesn’t have “the right temperament” or “the right judgment” to be president.

Two days later, when CNN’s Dana Bash asked Trump about those comments during that night’s presidential debate, he replied, “Let me tell you, as I have gotten to know him over the last three or four days, he has a wonderful temperament, he’s just fine, don’t worry about it.”

Perhaps Trump was sincere during the debate.

Perhaps the first comments were just political rhetoric and perhaps he really did get to know Cruz better and genuinely believes that “he has a wonderful temperament” and “he’s just fine.”

Then how do we explain Trump’s comments just one month later – and a month in which Trump made significant gains in the race – blasting Cruz in even more extreme terms?

Speaking to George Stephanopolous on ABC News on January 17th, Trump said of Cruz, “Look, the truth is, he’s a nasty guy. . . . Nobody likes him. Nobody in Congress likes him. Nobody likes him anywhere once they get to know him. He’s a very – he’s got an edge that’s not good. You can’t make deals with people like that and it’s not a good thing. It’s not a good thing for the country. Very nasty guy.”

So, what does Trump really believe?