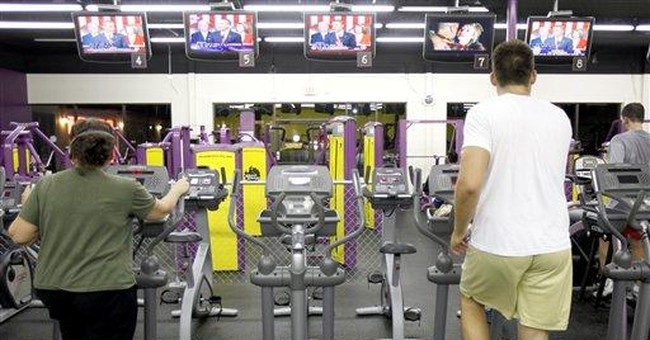 I would love to go a month – or even a week – without having to address this, but the cycle of social madness continues unabated, all centered on the “T” of LGBT, namely, transgender.

To repeat what I have said many times before, I have compassion for those who struggle with their gender identity, and we should do whatever we can to help them find wholeness from the inside out (in other words, working to help them be at home in their bodies without having to undergo radical surgery and be on hormones for life).

At the same time, we cannot impose the struggles of an extremely tiny minority (estimated at 3 per 1,000 people) on society as a whole.

Yet that is exactly what happened at a Planet Fitness gym in Midland, Michigan.

The basic story is not disputed. A woman named Yvette Cormier was in the locker room when a man, dressed as a woman, entered the locker room. This shocked Cormier, who reported it to the front desk and was told that the person in question was allowed to be in that locker room, since he identified as a woman.

According to local ABC News, “Cormier, who had been a Planet Fitness member for two months, said she went to the front desk immediately. The man at the desk told her that Planet Fitness policy is ‘whatever gender you feel you are, that’s the locker room you’re allowed to go in,’ she said.

“And then he said, ‘We’ve had lots of complaints about him but we told him to go change in a stall,’” Cormier said.

“He said, ‘if you’re uncomfortable with that you can wait until he’s done in there,’” she said. “I stood back and said, ‘How about he waits until I’m done in the women’s locker room. Or get a unisex bathroom.’ He asked if I would like to talk to the manager and I said, ‘I’m calling corporate.’”

When she persisted in voicing her complaint (which, according to Planet Fitness, she did inappropriately), her membership was revoked, since she was in violation of the company’s “Judgment Free Zone” policy. (If I wanted to make something up, I would not make up something this absurd.)

Now the transgender individual has identified himself as Carlotta Sklodowska, and he states that Planet Fitness told him, “You can use the locker room that corresponds with how you are dressed.”

Sklodowska did understand, of course, why Cormier would think he was not a woman. As explained in the Daily Mail without a hint of irony, “She added that she understood why Cormier would see her body structure as masculine, because many people tell her she looks like a man.”

Could it be that many people tell “her” that “she looks like a man” because she is a man?

Again, I mean no harm to this individual, who may be a very gentle soul and who surely suffers enough rejection already. I’m simply drawing attention to what seems obvious: Carlotta Sklodowska is a biological male, and as such, his presence in a women’s locker room, however innocent, is rightly considered inappropriate.

Cormier, for her part, claimed that “she wasn’t complaining because the person was transsexual, but because she thought there was a man in the women’s room.

To be sure, we have no idea at this point whether the way she presented her complaint was appropriate, but we do know that Planet Fitness is sticking with its policy.

According to an official statement, “Planet Fitness is committed to creating a non-intimidating, welcoming environment for our members,” apparently failing to ask if the presence of an obviously biological male in the ladies’ locker room might be intimidating and non-welcoming to all their female customers.

The statement continued: “Our gender identity non-discrimination policy states that members and guests may use all gym facilities based on their sincere self-reported gender identity.”

In other words, there is no test that is given (or can be given), no way to see if the person might be a heterosexual male voyeur (or worse) dressed up as a woman (this has happened in other states and venues), no method to determine whether the individual might be suffering some kind of mental disorder (as some former transsexuals now argue).

Not a chance. Instead, in whatever way the person self reports and self identifies, that’s how they are treated, to the point of sharing a locker room with people of the opposite sex.

And while in most cases, it would be assumed that a biological male who identifies as a female would want to disrobe and shower privately, that doesn’t mean that the discomfort experienced by the other females would be any less acute, nor does it mean that some “transgender women” would have any problem displaying their male genitalia around other women. (For an infamous example of this, see here.)

Cormier subsequently went back to the gym and reported that every woman in the locker room she talked to about this was “appalled.”

But rather than Planet Fitness revisiting their policy, which is what was getting people upset, they blamed her for making people upset by talking about this.

Should they feel it is crucial that they accommodate self-identified transgender members, they can build additional changing rooms for them.

Until then, they have an obligation to limit men’s rooms to men and women’s rooms to women. This is not “transphobic.” This is basic common sense and fundamental social sanity.

If they can’t do something this simple, they don’t deserve your membership.