A Question for Israel’s Critics 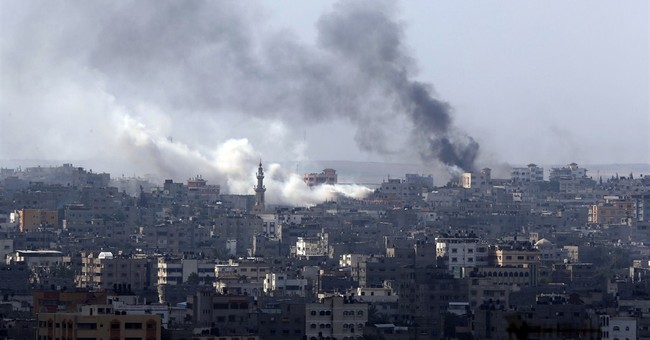 In light of the murderous actions and intentions of Hamas, what would you like Israel to do?

I wholeheartedly concur that the death of even one unarmed civilian is tragic, let alone the death of scores or of hundreds. And I affirm without hesitation that Arab blood is as precious as Jewish blood.

Would you prefer that Israel simply turned the other cheek and let its people be slaughtered?

Would you rather that Israel’s Iron Dome defense system was not as successful, so that an occasional missile landed in a heavily populated area and wiped out some Israelis?

Did you like things better in the days of the Second Intifada, when 1,100 Israelis were killed, the vast majority of them non-combatant civilians?

Is the whole problem that there are not enough dead Jews? (Click here for my November, 2012 article by that title; click here for a recent, similarly-titled article by Melanie Phillips.)

Reading a recent article in the New York Times, which provides a daily scorecard of Palestinian and Israeli casualties and bombings since the beginning of Operation Protective Edge, one gets the distinct impression that Israel is not playing fairly. Indeed, “After 11 days of fighting, 336 Palestinians and 5 Israelis had died.” How is that fair?

The photographs in the article generate sympathy almost exclusively for the Palestinians, with tragic images of a Palestinian man carrying the dead body of a little boy and of Palestinian women grieving, while the written text is hardly unbiased, with statements like, “Egypt’s proposal for a cease-fire between Israel and Hamas collapsed a few hours after the Israelis had accepted it. Palestinian militants launched rockets on Israel, some of which are shown above, and Israel resumed its airstrikes on Gaza.”

It would have been more accurate to say, “Israel accepted Egypt’s cease-fire proposal but Hamas rejected it, responding to the proposal with more attacks on Israel.” To say that the proposal simply “collapsed,” expressed passively without blaming the guilty party, is to mislead.

Even fellow-Muslims have been critical of Hamas’s actions, with an Egyptian TV host (who was solidly pro-Palestinian and anti-Israel) saying, “We are sick and tired of you.”

In the past, Israel’s critics denied or downplayed the Jewish nation’s attempts to protect Palestinian civilians, as if the IDF was making up reports that it dropped thousands of leaflets warning civilians to flee or called houses that were about to be bombed, urging those inside to get out.

Today, however, the IDF’s humanitarian actions are undeniable, as both Hamas and Fatah have urged civilians to ignore those warnings or, if they have evacuated, to return to their homes. Watch for yourself here as Hamas leaders say, “We call on our Palestinian people, particularly the residents of northwest Gaza, not to obey what is written in the pamphlets distributed by the Israeli occupation army. We call on them to remain in their homes and disregard the demands to leave, however serious the threat may be.”

So, Israel warns civilians to flee, not wanting to hurt them, while Hamas launches rockets from heavily populated neighborhoods, including schoolyards and hospital parking lots, urging civilians to return to these places of danger, yet Israel is somehow the guilty party, drawing violent, even blatantly anti-Semitic protests in cities like London and Paris.

One Palestinian woman commented on my AskDrBrown Facebook page that Hamas was not using its people as human shields. Instead, the people were willingly standing with their leaders, closing her post with, “Long live Palestine!” After all, the Israelis did not put Hamas in power, the people of Gaza did.

Sadly, if the citizens of Gaza wanted to live in peace with Israel and empowered a government that would act in their best interests, their standard of living would improve dramatically. As it is, in the midst of the warfare, Israel still sends humanitarian aid into Gaza on a daily basis and continues to provide medical care to wounded and sick Palestinians.

And, the truth be told, given Israel’s firepower, if Israel wanted to inflict casualties on civilians in Gaza, the death toll would be in the hundreds of thousands, as opposed to the hundreds. (Again, I do not for a moment minimize the current civilian casualties.)

Conversely, to put this in perspective, what would happen if the tables were turned and Hamas had Israel’s military capabilities? How many dead Israelis would there be?

Murderous sentiments like this, expressed in 2012 on Hamas-run Al-Aqsa TV after one of their bombs wounded 22 Israelis in Tel Aviv, provide a vivid and gory answer to the question.

As the TV report showed footage of the bloody scene, the announcer said: “These are scenes of the casualties. God willing, we will soon see black body bags. I pray to God the exalted we will see body bags in a short while. . . . Right now in these moments, the mosques in the Gaza Strip, their minarets are loudly sounding cries of ‘Allahu Akbar’ and cries of joy, and the residents of the Gaza Strip are bowing down to Allah for this offering [or, gift]. The morale of the Gaza residents is in the sky right now, and is rising just as the rockets of the resistance.”

As expressed more recently by a Muslim cleric in Lebanon (addressing Prime Minister Netanyahu), “We will give the skulls of your midgets as gifts for our children’s feet to play with.”

So, to rephrase my question, since 70% of the people of Israel have had to take refuge in bomb shelters and respond to sirens, and given the fact that Hamas is sworn to Israel’s destruction, what you would like Israel to do?