Is the IRS Lying? 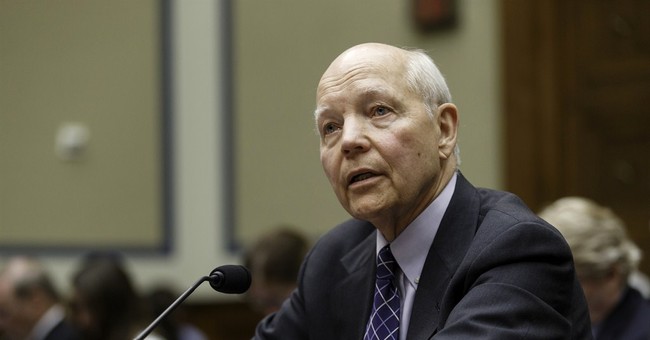 Is the IRS lying about Lois Lerner’s lost emails? The prevailing sentiment in America today could be answered with a series of rhetorical questions: Is the ocean wet? Do birds fly? Does the sun shine?

On Monday night, June 23rd, I posted this question on my Facebook page: “Do you believe the IRS destroyed emails that directly incriminated the White House?”

One hour later, the post had been viewed by almost 7,300 people and there were 163 comments, virtually of all which answered in the affirmative.

Some of the comments included remarks like: “Absolutely how could we logically think otherwise”; and, “Does a duck quack?”; and “Duh”; and, “Anybody with 2 brain cells to rub together does!”; and “Only a fool would think otherwise”; and, “Is the Pope Catholic? Does a bear.....well, you know the rest! Yes!”; and, “They were just trying to save hard drive space to save the taxpayers money.”; and, “I could almost believe 1 persons computer crashed but now 6 more people all a part of the targeting probe...if it looks like a duck.....”

I’m aware, of course, that the IRS is not America’s favorite organization and that it’s easy for us to criticize them. After all, who likes paying taxes – especially if we think there’s something unfair about them – and who likes filling out tax forms (unless you’re an account paid to do so)? And is there anything more dreaded than an IRS audit?

That being said, this is not just an example of Americans ganging up on the IRS, which, on a certain level, does provide a necessary government service.

To the contrary, we already have undeniable evidence of the IRS’s targeting of conservative groups, and there is the very suspicious, exponential increase of White House meetings with senior IRS officials during the same time frame that conservative groups were being targeted.

And now there is this ridiculously convenient, complete destruction and disappearance of the potentially incriminating emails, not just on Lerner’s hard drive, but on several other computers of interest as well.

To say that this is purely a matter of coincidence is to strain credulity to the point of absurdity, and to suggest that these files were not backed up externally is also quite a stretch. As one commenter noted on my Facebook page, “1.8 billion dollar budget for their IT. Oh yes. They will say that they do not have enough resources, even with that bloated IT budget.” And this, “Based on my experience as an IT professional, it seems the logical conclusion [that they are lying].” Others also asked about the NSA. Surely they have the missing data.

All of which leads to one obvious question: What is the IRS hiding? What could be so bad about those emails, so bad that it was better to “lose” them – as damning as that looks – then to produce them?

As House Oversight Committee Chairman Rep. Darrell Issa said to IRS Commissioner John Koskinen at an unusual night-time hearing on Monday, “We have a problem with you, and you have a problem maintaining your credibility.”

To Issa’s words, we might add, “To say the least!”

As for Koskinen’s claims that hard drive crashes are all too common, given the outdated equipment the IRS is force to use because of budget cuts, I imagine that many Americans are smiling to themselves over this remark as well, wondering, “How come the IRS never seems to lose my information when I owe them money?”

Of course, anything is possible, and through a series of bizarre mishaps, all the emails in question might really have disappeared without being backed up anywhere else.

But since the odds of that happening are so utterly astronomical, most Americans will likely conclude that the IRS is covering up something really serious, and many will believe the worst – right up to the doors of the Oval Office – unless they hear otherwise.