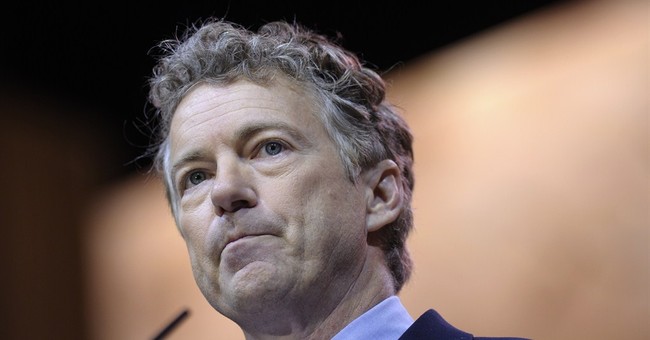 In an effort to expand his party’s base of support, Senator Rand Paul is urging fellow-Republicans “to find a place for young people and others who don’t want to be festooned by” issues like “traditional marriage.”

Is he serious? Does he actually think this is a winning strategy? And can he truly believe that this is a way for Republicans to advance their cause?

As reported on March 14th, Paul stated that, “I think that the Republican Party, in order to get bigger, will have to agree to disagree on social issues.”

What a self-defeating, misguided strategy, for quite a few reasons.

First, the very concept of expanding a party whose platform includes a strong, conservative stand on social issues by weakening that stand is contradictory and wrong-headed. It would be like Planned Parenthood deciding to agree to disagree on abortion, actively recruiting pro-lifers into their ranks (or the reverse, with pro-lifers expanding their base by agreeing to disagree on abortion and welcoming pro-abortionists into their ranks). Who ever heard of such nonsense?

Second, we’ve already seen in recent elections that by catering to the left-of-center Republicans, the party’s most important voting base gets turned off and fails to vote in force. And make no mistake about it: What Paul is referring to does cater to the left-of-center voters (more on this shortly).

Third, has Paul learned nothing from the success of the Democrats in 2012? Their platform, highlighted during the DNC, put forth a radical social agenda (from the most extreme pro-abortion stances to the wholesale embrace of gay activist goals, most particularly redefining marriage), and the Democrats did so unashamedly. Yet Paul thinks that by doing the opposite with his own party’s values, the Republicans can succeed.

Fourth, by compromising core values in order to get elected, you ensure that your party will be ineffective in bringing about change once elected, regardless of what promises are made. In fact, leaders who compromise in order to get elected have already revealed themselves to be lacking in conviction (which is a reason they should not be voted for in the first place).

Fifth, by minimizing the massive implications of redefining marriage – this is not the kind of issue you “agree to disagree” on – Sen. Paul indicates a fundamental lack of understanding of the inevitable results that will follow should marriage be redefined on a national level.

These results include the continued erosion of our freedoms of religion, speech, and conscience (churches and Christian leaders, don’t imagine for a moment that these issues will not be forced on you in the near future); more and more gay activist curricula in our children’s schools; the very real potential for the further redefining of marriage (note well that the same media that has been celebrating homosexuality for the last couple of decades is now celebrating polygamy – the newest show is My Five Wives – and polyamory); and even challenges to basic gender distinctions.

Almost 20 years ago, gay journalist Andrew Sullivan wrote, “If nothing else were done at all and gay marriage were legalized, ninety percent of the political work necessary to achieve gay and lesbian equality will have been achieved. It’s ultimately the only reform that matters.”

And Senator Rand Paul wants us simply to “agree to disagree” on this?

Yet Paul adds insult to injury by the vocabulary he uses, speaking of wanting “to find a place for young people and others who don’t want to be festooned by” issues like traditional marriage. Festooned by “traditional marriage”? (For the record, I prefer to call this natural, organic marriage, which it is.) Is the Republican Party also festooned by issues like standing against abortion?

According to the Merriam-Webster Dictionary, “to festoon” means “to cover or decorate (something) with many small objects, pieces of paper, etc.,” as in, “We festooned the halls with leaves and white lights,” just like one festoons (or, adorns) a Christmas tree with cute little trinkets, maybe with an angel on the top.

And that is how Paul sees the issue of redefining marriage, one of the greatest and most momentous moral, social, and spiritual issues of our time (or, really, any time)? (My debate at the University of Central Florida with Prof. Eric Smaw underscores this clearly, as does the recent book by Robert P. George, Sherif Girgis, and Ryan T. Anderson.)

The fact that Paul could utter these words at all is cause for deep concern. (I’m quite sure that he is not simply “festooning” his expected presidential campaign with rhetoric like this; he surely means what he is saying.)

The fact that he is presently at or near the top of the Republican heap is downright scary.