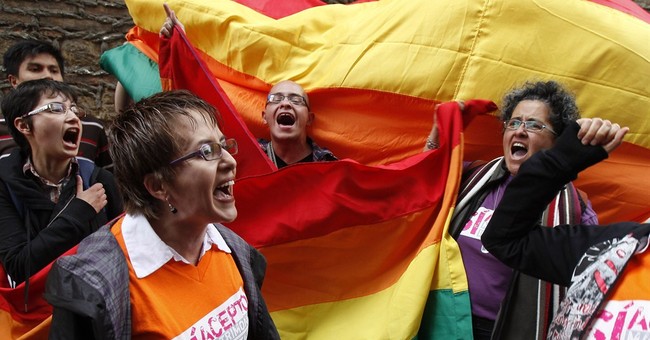 The cover of the December 16, 2008 issue of The Advocate, the flagship gay publication, proclaimed boldly that, “Gay is the New Black,” stating that this is “The Last Great Civil Rights Struggle.” But whenever I mention this topic on my national talk radio show, asking my listeners if they believe it is fair to equate the black Civil Rights movement with today’s gay rights movement, I am flooded with African American callers who take strong exception to this comparison.

Some of them remind me of the public lynchings, of blacks being hosed down with fire hoses and attacked by police dogs, of families having to spend the night sleeping in their car because the hotels wouldn’t serve them, of water fountains marked “No coloreds” – not to mention the horrible history of African slavery in our nation.

They feel that gays and lesbians are hijacking their movement, even if they recognize that there has been real suffering experienced by many LGBT individuals. They simply feel that the comparison is totally unfair, also pointing out that the financial situation of the average gay or lesbian in America today is far better than the average situation of an African American during the days of segregation (or even today, for that matter).

Of course, there are quite a few compelling reasons why it is wrong to claim that “gay is the new black” (for a relevant article, click here), but during a recent

For this, I was mocked by

And did any of these black celebrities have an interracial wedding of such prominence that it was celebrated on the front pages of our national magazines (as Ellen’s lesbian wedding was)? (To be clear: I’m not comparing interracial marriage with same-sex “marriage.” I’m simply illustrating a point.)

And when Jackie Robinson broke the color barrier in the big leagues, did he receive a congratulatory call from the president, as did Jason Collins when he came out as the first gay NBA player?

Even the conservative gay journalist Charles Winecoff once wrote, “Newsflash: blacks in America didn’t start out as hip-hop fashion designers; they were slaves. There’s a big difference between being able to enjoy a civil union with the same sex partner of your choice – and not being able to drink out of a water fountain, eat at a lunch counter, or use a rest room because you don’t have the right skin color.”

But let’s test my theory a little further, since I simply used Ellen as one example of a larger phenomenon, and I do understand why these websites chose to challenge me on that point.

So, I personally invite Evan Hurst, who penned the aforementioned article on TruthWinsOut, along with Kyle Mantyla, who wrote the article on RightWingWatch, to help fill in the gaps of my apparent historical ignorance.

Should they prove me wrong in my assumptions about the false nature of the “gay rights equals black rights” social comparison, I will gladly admit my error. Should they be unable to answer my simple questions, I hope they would have the candor to admit their error.

Looking at the list of the 50 most powerful gay Americans (according to Out.com), and using 1964 as an end date for official segregation (with the passing of the Civil Rights Act), would someone please be kind enough to let me know who the pre-1964 African American equivalents were for the following gay leaders:

Suze Orman, the national TV host and respected financial guru. (No one comes to mind? Really?)

Anderson Cooper, one of the most familiar faces on CNN, and Rachel Maddow, of MSNBC fame. (What? No similarly famous, national black newscasters prior to 1964?)

Annise Parker, mayor of Houston. (So, there were no black mayors of major American cities prior to 1964?)

David Geffen, one of the most powerful media moguls. (Surely you have a list of black Americans during the days of segregation who carried the clout that Geffen carried, right?)

Tim Cook, CEO of Apple. (How about just one black CEO of any of the Fortune 500 companies in America before 1964, let alone the CEO of the 6th-ranked company on the most recent list?)

Well, these are just a few to get us started, so it should be pretty easy to provide me with answers, right? After all, if it’s idiotic to say that we cannot fairly compare the social situation of gays in America today to the social situation of African Americans in the days of segregation (again, without even mentioning their prior, horrific mistreatment in our nation as slaves), then it should be relatively easy to answer my questions. Evan and Kyle, I’m all ears!

That being said, I stand with Evan and Kyle in denouncing any acts of violence or hatred against any person who identifies as LGBT, and one gay kid bullied by his peers at school is one too many.

So, I’m not minimizing the poor treatment experienced by many gays and lesbians in America to this day. I’m simply saying that it is grossly inaccurate to compare the current “gay rights” movement with the black Civil Rights movement of the past, not to mention downright insulting to African Americans.

His Race to Lose? Another Poll Shows Ron DeSantis Is Rolling in Florida
Townhall
David French accuses DeSantis of attacking the First Amendment and it does NOT go well for him, like at all
Twitchy
Mitt Romney Just Stomped All Over Liz Cheney's Presidential Dreams
Redstate
BREAKING: Trump Threatens "Major Motion" Regarding His 4th Amendment Rights
PJ Media