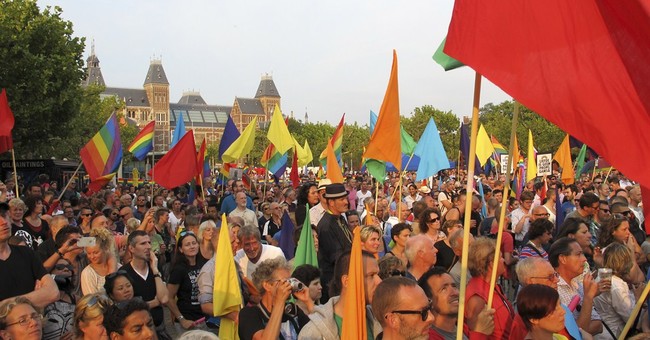 This past weekend, students and friends of our ministry school in North Carolina conducted a survey at the gay pride event in Charlotte. The survey was entitled, “Are You Open Minded?”, and it led to some fascinating interaction, highlighting the moral malaise of this generation.

But first, some of the results of the survey, which provided a random sampling of the multiplied thousands who attended Charlotte Pride.

Slightly more than 100 people responded to our questions, 52% female, 47% male, and one self-identified as genderqueer (this was in response to the category “other”; another respondent, while identifying as female, also described herself as man, woman, and transgender).

70% identified as gay (meaning gay or lesbian), 15% as straight, 11% as bisexual, 4% as pansexual (or omnisexual, meaning anything goes), and 2% as transgender (there was some overlap in the descriptions, and so the numbers total more than 100%).

The first question on the survey was, Do you agree with the statement, “I have the right to marry the one I love”?

Remarkably – but not surprisingly – the response was 100 Yes, 2 No. Talk about groupthink! Talk about a mass of people buying into an empty slogan!

As a follow-up question we asked, If so, are there any exceptions? (Polyamory? Polygamy? Consensual adult incest [opposite sex? same-sex?]? Age of consent for marriage?)

Although not as many responded to this, the results were 59 Yes, 23 No, meaning that almost 30% of the respondents said that there were no exceptions to the statement, “I have the right to marry the one I love.”

Some of the explanatory comments offered by the respondents included: “You’re into what you’re into, so do what you wanna do”; and, “No age of consent: if you love someone, go ahead and get married”; and, “To each his own”; and, “Whatever floats your boat, as long as it’s not hurting others.”

But of course. Once you buy into the “love is love” proposition, how can you draw a line, as long as the relationship is consensual?

For those stating that there were exceptions, most were concerned about age of consent (and so, issues like pedophilia) and incest (although few tried to explain what the problem with incest was, especially if it involved two adult brothers, eliminating the possibility of children being born to them). Some also felt that marriage should be limited to only two consenting adults, but with no further explanation offered.

We next asked, If same-sex marriage becomes the law of the land, should religious exemptions be allowed for those who do not want to participate?

Results here were 72 Yes and 20 No, which is certainly sobering news (but again, not surprising), since roughly 22% of those responding felt there should be no religious exemptions for anyone (we asked specifically about churches, business, and individuals), while a large percentage of those who said Yes to religious exemptions said it should apply only to churches, not businesses.

When we asked what kind of penalties should be exacted on businesses that would not participate with same-sex marriage, most respondent suggested financial penalties, with one explaining that the fine should be “large enough to prevent any further action.” Another opined that “their religious right is not as high a right as participating in gay marriage.”

This is in keeping with the publicly expressed goals of the militant left. As stated by James Esseks, head of the ACLU, on the Gay USA online TV show, “These religious freedom arguments, these religious exemption arguments are so powerful because they could completely eviscerate the non-discrimination norms that we have already passed in states and we are trying to pass in the federal government level and in other states as well. And so these are not places where it makes sense for us to compromise as a community because it’s gonna, it’s going to completely undermine the equality principles that we need.”

Of course, I have been vilified for years for saying that gay activists progressed from, “We want our rights,” to, “We demand you recognize our rights,” to, “We’re taking away your rights,” yet it is unfolding now in front of our eyes. (Next on the list is that those who came out of the closet will try to put us in the closet.)

Still, none of this would be happening if not for the moral confusion that has enveloped our generation, especially among the youth, highlighted by this dialogue that took place between two of our team members and two young ladies who identified as straight, church-going Christians.

Responding to the question, Is it bigoted to believe that homosexual practice is sin?, they both said No, with one of them explaining, “Being gay is a lifestyle. Having gay sex is a sin.” (This, of course, begs the question, How many people live a “gay lifestyle” without having sex?)

When asked why they were at the gay pride event, they stated with enthusiasm that they were there to support people that they love. (To watch the entire, extraordinary video interaction, click HERE.)

The same girl reiterated that gay sex was sinful, but supporting the gay pride event didn’t mean she agreed with it since, again, being was a “lifestyle.”

When asked once more if she believed gay sex was sin, she replied, “It’s a sin but I’m not against it. I think you’re forgiven no matter what.”

When asked, “So, you support people having gay sex?” she answered, “Yeah, I think that you can’t help your heart sometimes.”

And that about says it all. Biblical morality can’t trump the desires of your heart, right?