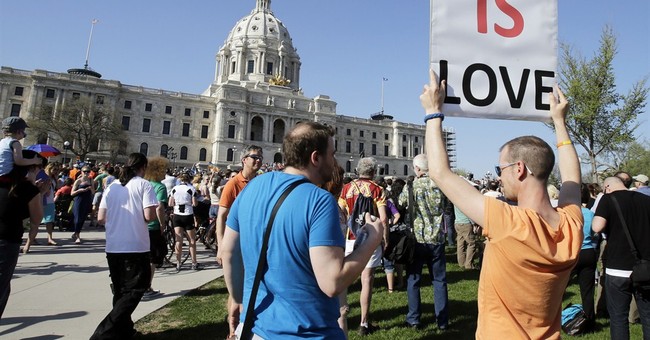 Gay activists love to point to the changes in public opinion regarding same-sex marriage, announcing triumphantly that this is a sign of moral and even spiritual advancement. In reality, it is part of a larger trend towards immorality, a sign of moral bankruptcy and spiritual apostasy.

According to a May 13th Gallup report, “Just three years ago, support for gay marriage was 44%. The current 53% level of support is essentially double the 27% in Gallup's initial measurement on gay marriage, in 1996.”

But let’s put that data into a larger, cultural perspective. A May 20th Gallup report is headlined, “In U.S., Record-High Say Gay, Lesbian Relations Morally OK,” with the subtitle reading, “Americans' tolerance of a number of moral issues up since 2001.”

What exactly is meant by “tolerance”?

The report states that, “Americans' views toward a number of moral issues have shifted significantly since 2001. Their acceptance of gay and lesbian relations has increased the most, up 19 percentage points in the past 12 years -- to a record high of 59% today. Americans' tolerance toward having a baby outside of marriage is also now much greater, up 15 points since 2001 [actually, 2002], to the current 60%.”

According to the poll, American approval of fornication – or, as the poll put it, “Sex between an unmarried man and woman” – was up 10% (from 53% to 63%), while support for polygamy actually doubled, from 7% to 14% (keep your eye on that stat in the coming years). This is something to celebrate?

In 2001, Gallup didn’t even ask the question of the moral acceptability of teenagers having sexual relationships, but in the current poll, only 63% found it morally wrong while 32% expressed their moral approval. How enlightening!

The pollsters used the following script: “I’m going to read you a list of issues. Regardless of whether or not you should think it should be legal, for each one, please tell me whether you personally believe that in general it is morally acceptable or morally wrong.”

Interestingly, while the word “sex” was used with reference to “Sex between an unmarried man and woman” and “sex between teenagers,” and while the word “affair” was used with reference to “Married men and woman having an affair,” no such explicit or derogatory term was used with regard to homosexual practice. Rather, that was referred to as “Gay or lesbian relations.” Would the response have been different if the pollsters had asked about “two men or two women having sex” – unless, of course, “gay and lesbian relations” are all merely platonic? (Please forgive my sarcasm.)

But I digress. What is clear is that American sexual morals are in steady decline, and there is very little that shames us these days. After all, this is the nation in which a young woman’s quickest ticket to fame is a bestselling, graphic sex tape. Sometimes the girl’s parents even gush with pride at their daughter’s achievements, and at the risk of sounding trite, we can honestly say that what used to shame us now makes us famous

It is against this backdrop that public approval for same-sex relationships continues to increase.

And let’s not forget that the same media that incessantly pushes the causes of gay activism also promotes shows like Teen Mom, glamorizing young women who have children out of wedlock, along with shows like Big Love and Sister Wives, normalizing and even celebrating polygamy. And this has no effect on the public’s perceptions?

Leading the way in these changing views towards gay and lesbian relations is the younger generation, aged 18-29. According to Gallup, in 1996, 41% of them supported same-sex marriage; today, that number is up to 70%. But this is the same age group that believes that roughly 30% of the population is gay or lesbian – an error of 1,000%! (The best studies put the number at roughly 3%.) Does the media have nothing to do with these skewed perspectives?

We should also remember that Barna polls conducted over the last 15 years indicate that only 0.5% of Americans aged 18-23 held to what Barna defined as a biblical worldview, in contrast with about 10% of the population as a whole. Is it any surprise then they are so strongly supportive of same-sex relationships?

As for our country’s increasing “tolerance,” it is not happening quickly enough for 18-year-old Kaitlyn Hunt and her family. She has been arrested for having a sexual relationship with a 14-year-old girl, one which her father says was consensual.

The Daily Kos reports that, “Florida teen Kaitlyn Hunt, 18, is seeing her young life turned upside down and her future jeopardized simply because she fell in love. Unfortunately for her, she fell in love with a younger girl who has vindictive bigots for parents.”

Her father, Steven Hunt, wants prosecutors “to drop the two charges filed against his daughter in February. A rainbow-colored ‘Stop the hate, free Kate’ page on the online petition site Change.org had more than 56,500 supporters calling for prosecutors to drop the charges Monday afternoon, and a similar ‘Free Kate’ Facebook group page had more than 30,000 members.”

Well, just give it a little more time. Soon enough, these things will be accepted too. Immorality is trending.