Michael Barone
|
Posted: May 14, 2021 12:01 AM
Share   Tweet
The opinions expressed by columnists are their own and do not necessarily represent the views of Townhall.com. 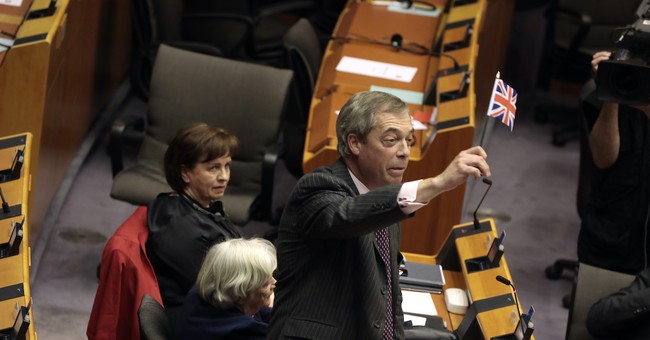 Five years ago next month, British voters, in the largest turnout ever, voted to leave the European Union by a 52% to 48% margin. It was an unexpected result, and a harbinger of Donald Trump's even more unexpected election as president five months later.

In both countries, key votes were cast by white non-college graduates. In the U.S., blue-collar Democrats in Pennsylvania and the Midwest switched to Trump. In the U.K., working-class voters long loyal to Labour joined leading Conservatives in supporting Brexit.

Supposedly ascendant coalitions of metropolitan professionals and racial and ethnic minorities were, to their self-righteous rage, defeated. Metro London, with 20 percent of the nation's votes, voted 60 percent to 40 percent to remain in the European Union. But the rest of England, 70 percent of the U.K., voted 57 percent to 43 percent for Brexit.

Five years on, the realignments that produced 2016's surprise have continued, with seemingly different results in the two countries. Here, Democrats regained the White House in 2020 and won majorities in both houses of Congress.

In Britain, the Labour Party, split between metropolitan leaders and working-class Brexit voters, suffered its worst defeat in decades in 2019 and did even worse in local elections last week. It looks to be in danger of joining the old socialist parties of France and Germany as extinct major parties.

But the differences can be overstated. Joe Biden's Democrats have only tenuous majorities and face increasing tensions between woke leadership and historic constituencies on important issues such as crime and immigration.

In Britain, such tension has resulted in Labour losing dozens of House of Commons seats in its "Red Wall" -- the traditional textile, steel and coal mining communities in the Midlands and north of England. Conservatives won more than 40 Red Wall seats as Prime Minister Boris Johnson's Conservatives won 365 seats to Labour's 202 in December 2019.

After that, Labour ditched its London-based leftist party leader Jeremy Corbyn for London-based barrister Keir Starmer. Like long-serving (1997-2007) Labour Prime Minister Tony Blair, Starmer is moderate on economics, but he joined Blair in trying to overturn the Brexit referendum and proudly took a knee in support of Black Lives Matter.

Starmer's stances won him record support, 65% and 70%, respectively, in his home constituency of Holborn and St. Pancras (you've been there if you've ever been a tourist in London). But he foolishly chose an anti-Brexit candidate in last week's special election for the Red Wall seat of Hartlepool, a 70% pro-Brexit port on the North Sea (which few American tourists have ever seen).

Hartlepool was a Labour seat since its creation, won by Blair consigliere Peter Mandelson with 61 percent and 59 percent in 1997 and 2001, respectively, before he was European Union commissioner from 2004 to 2008. Last week, Hartlepool voted for Conservative over Labour by 52% to 29%.

"Labour," writes Telegraph columnist Janet Daley, "has not just, as everybody keeps saying, 'lost touch' with its traditional supporters: it now holds them in open and quite febrile contempt." And she adds some historical perspective: "What is the point of a political party that began as the voice of the industrial proletariat when there is no more industrial proletariat?"

The Labour Party was founded in 1900 as the political arm of labor unions at a time when the working class was the majority of the electorate. Continental parties with similar heritages are in even more trouble. France's Socialist Party, which won the presidency in 2012, got 6 percent of the vote in 2017. Germany's Social Democratic Party, founded in 1863, has now fallen to a distant third place in polling for next September's election, with the Green Party emerging as the chief competitor of the governing CDU/CSU.

It may be natural that, as the working class grows smaller and high-education cultural leftists more numerous, an environmental and anti-nationalist left will replace socialists as major parties in parliamentary systems or as dominant forces in the left party in two-party systems like ours.

One lingering problem: Working-class-dominated parties have concrete goals relevant to large constituencies. But high-education- and class-dominated parties tend to fixate on the abstract aimed at increasingly microscopic groups (transgender rights) or virtue signaling their own superiority over the benighted masses ("systemic racism").

Neither is a winning tactic in a Britain, which "has fundamentally shifted" and "become a more open society," as its multiracial Commission on Race and Ethnic Disparities recently concluded, or in an America, which elected a black congressman from a white-majority district in 1972 and a black president in 2008 and 2012.