A Cold Wind off Lake Michigan - for Chicago and America

Michael Barone
|
Posted: Sep 14, 2018 12:01 AM
Share   Tweet
The opinions expressed by columnists are their own and do not necessarily represent the views of Townhall.com. 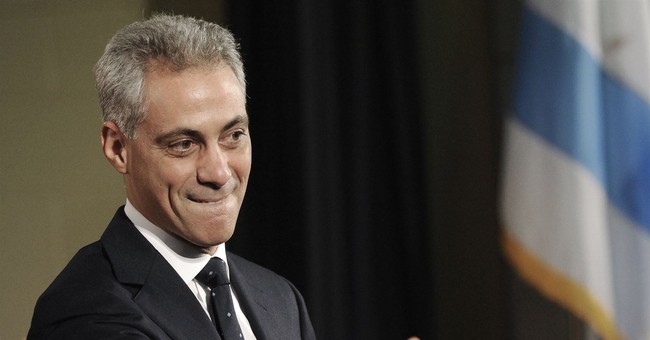 "It's the Lord of the Flies on LaSalle Street," wrote columnist John Kass in the Chicago Tribune. In case the references are unclear, whether because high schools haven't been assigning the William Golding novel in the last few decades or because out-of-towners unaccountably don't realize that Chicago's City Hall front is on LaSalle Street, the curmudgeonly Kass was writing about Mayor Rahm Emanuel's announcement that he won't run for a third term as mayor next February.

Should readers from outside Chicagoland care? Yes, because Emanuel's surprise exit is a sign of the unworkability of policies that will go national if Resistance Democrats oust Donald Trump, and indeed of some policies embraced by Trump as well.

Emanuel will be leaving office as a frustrated and unsuccessful mayor, even though he is one of the great political talents of his generation. Former Clinton fundraiser and White House staffer, Chicago congressman and chairman of House Democrats' campaign committee when they overturned a Republican majority in 2006: He's done it all.

He gave up a House leadership post to be Barack Obama's first White House chief of staff; he gave that up to run for mayor -- the job that every traditional Chicago politician considers far more important than anything "out of town" (said with a derisive curl of lip).

Emanuel's decision -- and his robust victory margin -- suggested that he intended to stay at 121 North LaSalle Street about as long as the 20-plus years of the ally he replaced, Richard M. Daley, and Daley's father before him. Instead he'll serve just eight.

Emanuel inherited a city whose electorate was divided roughly equally between blacks on the South and West Sides, Hispanics on the West and Northwest Sides, and gentry liberals running ever farther inland from the lakefront. It had a great economic heritage and enjoyed robust growth in the 1990s.

It has been downhill since. Chicago and Illinois have been hobbled by metastasizing pension obligations, frozen in place by state courts and state House speaker (for all but two years since 1982!) Michael Madigan. Taxes have been rising: Shoppers on North Michigan Avenue pay the nation's highest taxes.

Chicagoans have been voting with their feet. Metro Chicago has by far the highest percentage of domestic out-migration of any major metropolitan area, and net outflow this decade is 5 percent of its 2010 population. In particular, blacks have been leaving metro Chicago for Atlanta and other points south.

Emanuel's electoral base has been lakefront liberals plus a plurality of whichever minority group hasn't produced his main opponent. That was blacks in 2015, but his standing with black voters has been hurt by his concealment during electoral season of the videotape of a police shooting of a young black man.

At the same time, Emanuel acquiesced in Obama administration oversight of the city's police department. And police officers' retreat from proactive policing has led to enormous increases in shootings and homicides.

I happened to be in Chicago in the early weeks of December 2008 and saw the celebratory air of a city festooned with posters hailing the new president -- the first president Chicago ever produced. But after leaving office in January 2017, Obama has not moved back to Chicago and recently only visited briefly. Hope and change is not in the air.

Chicago is one of the great creations of mankind: a frontier post in 1833 that was one of the world's great cities just 60 years later, showing off in the World's Columbian Exposition of 1893 its new lakefront parks, its new electric light systems, its sanitary canal channeling wastewater away from Lake Michigan, its pioneering skyscrapers and enormous stockyards and factories.

Now the economic foundations of the metropolis are being drained and undermined to provide the generous pensions of long-retired public employees, many of them now in income-tax-free Florida, while public schools are closed, services reduced, police patrols pulled back.

That looks like a future of decline for Chicago, and maybe for America, too. Democrats have shown zero interest in reducing the entitlements of retirees, not since President Bill Clinton broke off negotiations with House Speaker Newt Gingrich amid the impeachment crisis of 1998. Ditto Donald Trump, and no Republican seems to be raising the issue, as President George W. Bush did in 2005.

It's not a good sign - like a cold wind coming off Lake Michigan - that even as shrewd and well-connected a politician as Rahm Emanuel doesn't see a viable way forward.