Michael Barone
|
Posted: Apr 27, 2018 12:01 AM
Share   Tweet
The opinions expressed by columnists are their own and do not necessarily represent the views of Townhall.com. 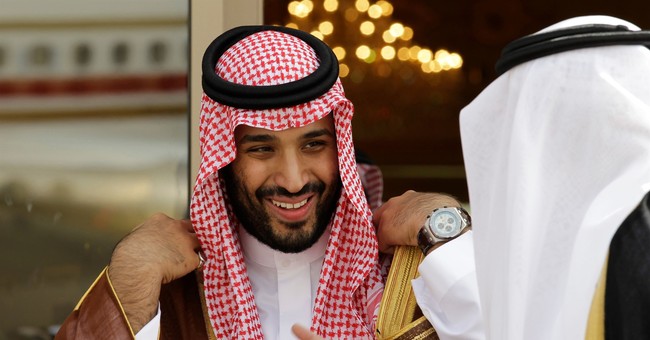 Seventy-three years ago, Franklin D. Roosevelt, on his trip back from the Yalta conference with Winston Churchill and Josef Stalin, held his last meeting with foreign leaders, aboard the USS Quincy in the Suez Canal's Great Bitter Lake. One was with the desert warrior king, Abdul Aziz ibn Saud, who sailed in with seven live sheep and a tent to sleep in on deck.

The United States had provided almost all of its allies with all the oil they used during World War II. But there were (unfounded) fears that American wells were tapped out, while American geologists produced (well-founded) estimates of giant untapped pools in the Saudi desert. Roosevelt wanted American, not British, firms controlling it.

The meeting marked the beginning of a long U.S.-Saudi relationship -- or perhaps "entanglement" is a better word. It lasted beyond Roosevelt's death two months later and Ibn Saud's in 1953, through the 13 presidents who succeeded FDR and through the six sons of Ibn Saud, who was born in 1875, who succeeded him as king.

Now the latest king's son, 32-year-old Crown Prince Mohammed bin Salman (known as MBS), has journeyed here and met with Donald Trump, in an initiative that may prove as momentous as that long-ago meeting with the young prince's grandfather and the 32nd president.

The post-1945 U.S.-Saudi relationship meant vast flows of money to and American military protection of a Saudi elite unsympathetic to American moral values and at odds with important U.S. policies. The flows of money expanded after the Saudi-staged OPEC oil production cutbacks after the 1973 Arab-Israeli War, and the military protection clicked into place after Saddam Hussein swept into Iraq and headed toward the Saudi oilfields in 1990.

The relationship continued despite a widening gulf in values in the years after radical Islamists' 1979 seizure of the Grand Mosque in Mecca. In response, the Saudis strengthened their ties with the rigid Wahhabi sect, imposing harsh restrictions on behavior at home and subsidizing extremist madrassas and terrorists abroad. In the 1980s, Saudi-financed mujahedeen helped expel the Soviets from Afghanistan, but in the 1990s, they turned on America. Osama bin Laden and 15 of the 19 Sept. 11 hijackers were citizens of Saudi Arabia.

The terms of the U.S.-Saudi relationship obviously needed changing, and they have changed. The fracking revolution has made America an oil exporter again, as it was before 1945, and the resulting lower oil prices have made Saudi subsidies of its citizens unsustainable. MBS is trying to build a modern economy, one in which Saudis actually have to work, and spent two weeks around the U.S. seeking investments. He is scaling back Wahhabi restrictions. Women will be allowed to drive, for example, to venture from home without male supervision and even to watch movies in theaters.

Saudi foreign policy is changing, as well, and the Trump-MBS meeting may have cinched a new de facto Middle Eastern alliance.

Saudi Arabia and the Gulf sheikdoms have clearly been alarmed by Barack Obama's nuclear deal with Iran and have not been assuaged by Obama's hopes -- so far entirely unfulfilled -- of a rapprochement between the Iranian theocracy and the United States.

President Trump has denounced Obama's nuclear deal, and the debate in his administration is evidently whether to withdraw from it or to seek rigorous enforcement, which might blow it apart.

In a striking interview with Atlantic editor Jeffrey Goldberg, MBS made clear which president's view he shares. "I believe that the Iranian supreme leader makes Hitler look good," he said. "Hitler tried to conquer Europe," he went on. "The supreme leader is trying to conquer the world."

On another issue, MBS took a position opposite to that of his grandfather back in 1945. Ibn Saud uttered a firm no when FDR asked for support of a Jewish homeland in the Middle East. To Goldberg's question about Israel, MBS said, "Each people, anywhere, has a right to live in their peaceful nation. I believe the Palestinians and the Israelis have the right to have their own land." That's a clear break with Arab refusals to acknowledge any Israeli "right" to exist.

Whether MBS' new domestic and foreign policies can be sustained is unclear, and Trump's support must be regarded as a gamble. But the Obama administration's tilt toward the terrorist regime of Iran was also a gamble -- and one that so far has not produced the hoped-for gains. Which looks likelier to last as long as the arrangements first embarked on 73 years ago in the Great Bitter Lake?