Tension Between President and Congress Is Politics as Usual

Michael Barone
|
Posted: Sep 22, 2017 12:01 AM
Share   Tweet
The opinions expressed by columnists are their own and do not necessarily represent the views of Townhall.com. 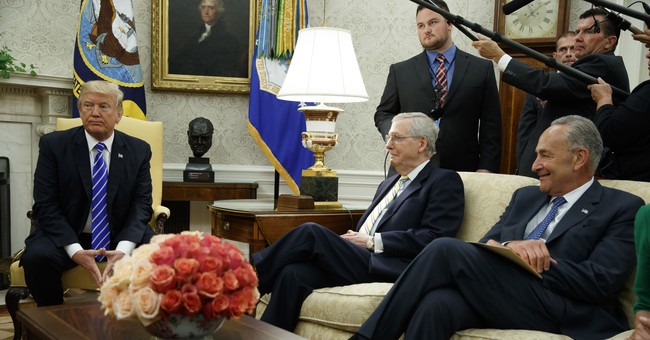 For the first time in nearly 20 years, the president seems out of alignment, on policy and political goals, with his party in Congress. This strikes many as an anomalous, even alarming, situation. But if you look back at history, it's more like the norm -- even if Donald Trump isn't.

The current presidential/congressional alignment began in January 1998, when the Monica Lewinsky scandal broke into the news. For several years before that, President Bill Clinton had engaged in what was called triangulation, positioning himself on issues between his party's liberal congressional leaders and the conservatism of House Speaker Newt Gingrich.

His collaborations with Gingrich resulted in serious bipartisan legislation -- welfare reform, a children's health care package, balanced federal budgets. In the process, Clinton pointedly ignored House Minority Leader Dick Gephardt. That ended when Clinton needed solid Democratic support during the impeachment process against him for his lying under oath about his affair with Lewinsky.

George W. Bush was generally in sync with congressional Republicans, and when he lost some of their votes -- on education and Medicare prescription drugs -- he was able to attract enough Democrats to compensate. Barack Obama worked in tandem with Democratic congressional supermajorities in 2009-10, and they supported his "pen and phone" governing process afterward.

Donald Trump's bombastic anti-Washington rhetoric on the campaign trail, including stabs at Republican Party leaders, meant that the two decades of presidential-congressional alignment was most likely over. His cordial meeting with Democratic leaders Chuck Schumer and Nancy Pelosi, whether or not it results in immigration enforcement compromise legislation, indicates it is.

Trump did give vague verbal support to House Speaker Paul Ryan's and Senate Majority Leader Mitch McConnell's proposals for tax cuts and repealing and replacing Obamacare. But he reportedly, and plausibly, was miffed when they didn't result in bills he could sign.

Not my fault, he apparently thought. But of course, it was -- partly. Bush and Obama had serious policy shops that worked closely with their parties' leaders on both process and policy. Trump doesn't. Bush and Obama and their policy shops were knowledgeable about the contents of major proposals and bills. Trump isn't.

That gives him plenty of room to maneuver. And it undercuts and perhaps completely eliminates the leverage of the members of the House Freedom Caucus whose hostility to Ryan prevented him from getting a 218-vote House majority out of his 241-member caucus.

Now Trump and Pelosi have such leverage, as it's clear that withholding Freedom Caucus votes can mean policy victories for the left. Caucus head Mark Meadows inferentially acknowledged as much when he promised that his group would support the Graham-Cassidy health care bill if it were to pass the Senate.

Lack of alignment between a president and his congressional party may be unfamiliar, but it's certainly not new. Franklin D. Roosevelt's New Deal measures passed in crisis years when his party had big majorities, but later he was repeatedly frustrated by isolationist Western and conservative Southern Democrats.

Harry Truman, after his surprise 1948 victory, wasn't able to get his liberal policies through a Democratic Congress. Dwight Eisenhower, at loggerheads with conservative Republicans, was not displeased when they lost their thin majorities in 1954.

By 1963, political scientist and FDR biographer James MacGregor Burns was writing "The Deadlock of Democracy: Four-Party Politics in America." Like many such works, it accurately described the recent past, but it did not foresee how Lyndon Johnson would push his Great Society through a Democratic Congress in 1965.

Over the next 30 years, presidents and their congressional parties wandered into and out of alignment with each other. Many of Richard Nixon's toughest Watergate critics were Republicans. Gerald Ford's old congressional colleagues sustained his vetoes, but not by much. House Speaker Tip O'Neill was openly contemptuous of Jimmy Carter's closest aides.

Ronald Reagan got a bipartisan majority for his tax cuts in 1981, but Bob Dole pushed back with smaller tax increases in 1982. George H.W. Bush lost half his congressional party when he broke his read-my-lips-no-new-taxes vow in 1990. Bill Clinton worked with Democratic majorities in 1993, but they couldn't pass Hillarycare in 1994.

In that perspective, the recent two decades of close presidential/congressional alignment looks more like the exception than the rule. The Framers purposefully established something less like an efficient government and more like an arena of conflict. Presidents and members of Congress are elected at different intervals by different constituencies.

The dealignment of Trump and congressional Republicans may be unnerving, but it's not abnormal.