Michael Barone
|
Posted: Apr 15, 2016 12:01 AM
Share   Tweet
The opinions expressed by columnists are their own and do not necessarily represent the views of Townhall.com. 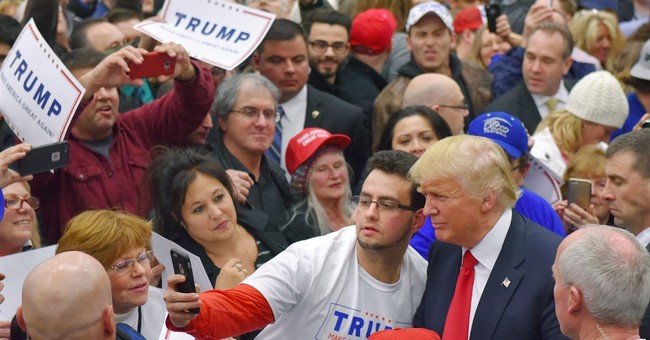 "Today winning votes doesn't mean anything," Trump complained. "It's a corrupt deal going on in this country and it's not fair to you people."

Such complaints typically come from people who are not, in one of Trump's favorite words, "winners." Trump conspicuously refrains from complaining about how though he has won just 37 percent of votes cast in Republican primaries and caucuses, those votes have given him 46 percent of the delegates.

That happened because of the rules. Trump has benefited from winner-take-all rules in states such as Florida and Arizona. He has benefited from split opposition: In only one state (Massachusetts) has he won more popular votes than the combined total for Cruz, Marco Rubio and John Kasich.

Anti-Trump candidates could have joined forces and encouraged tactical voting. When they didn't (exception: Rubio advised his Ohio supporters to vote for Kasich, a favor not returned), Trump had no complaints.

But he did have complaints when Cruz operatives worked successfully to win technically uncommitted delegates in conventions, as they did in Louisiana and North Dakota. Trump's response: "I don't care about rules."

It seems to run in the family. Trump's son Eric and daughter Ivanka can't vote for him in the New York primary because, as Trump explained, "They didn't know the rules and they didn't register (Republican) in time." Even though the rules have been in force for years and are readily accessible online.

The Colorado rules Trump complains about were adopted last August and available online in September. The Cruz campaign took note and started working to use them to maximum advantage. The Trump campaign didn't. Whose fault is that?

Plus, it is odd to hear charges of "Gestapo tactics" from a spokesman for a candidate who has encouraged supporters to beat up hecklers and offered to pay for their legal expenses.

Nonetheless, it's inevitable that some Trump supporters will find merit in his plaints and if, as seems likely but not certain, he fails to win in primaries and caucuses the 1,237 delegate votes needed for the nomination, they will start bellowing, "We wuz robbed."

Trump himself has suggested the 1,237 is just an arbitrary number and has encouraged voters to believe, as polls show most Republican primary voters do, that the candidate with the most delegates is entitled to the nomination even if he falls short of the majority.

But requiring a majority is the opposite of arbitrary. The requirement is designed to prevent a party from being saddled with a nominee opposed by a majority of delegates.

In the past, ever since primaries became the dominant system for selecting delegates, this hasn't been an issue -- because candidates who rolled up big delegate leads were broadly acceptable to non-supporters. Trump, who hasn't won 50 percent in any primary or caucus yet (though he may in New York April 19), isn't.

Of course there is always some basis for a loser to complain about the rules. The presidential nomination process is the weakest part of our political system and, not coincidentally, the only one not addressed by the framers of the Constitution.

None of the successive reforms made since 1968 have produced a perfect system, and in a nation of this size, none can.

A national primary would penalize all but a few nationally known candidates. Caucuses tend to favor candidates with constituencies of well-organized voters. Reasonable people can differ about whether it's fairer to allocate delegates proportionately or by winner-take-all.

Arguments over the rules inspired one of my Rules of Life: "All process arguments are insincere, including this one." Losers' real gripe is not with the process but the result.

It's likely that Trump will fall short of the 1,237-delegate majority after the last contests June 7, and it's entirely possible that well before the convention opens July 18 Cruz will get enough commitments to get to 1,237 on a second ballot.