A Vote for Kasich Is a Vote for Trump

Michael Barone
|
Posted: Mar 25, 2016 12:01 AM
Share   Tweet
The opinions expressed by columnists are their own and do not necessarily represent the views of Townhall.com. 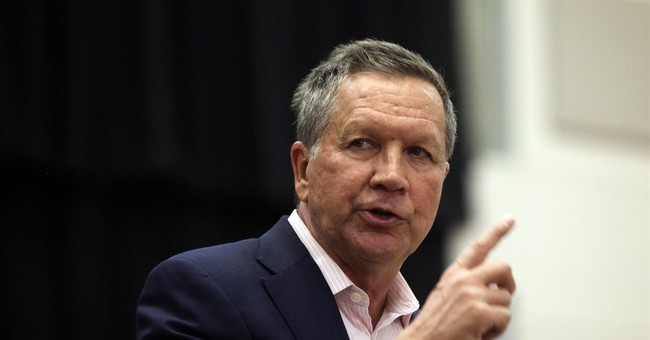 Trending
Perhaps the most important results of the March 22 Republican primary in Arizona and caucus in Utah were numbers that didn't appear on your television screen, no matter how late you stayed up for the poll closing times. Those were the numbers of votes cast for Marco Rubio in Arizona -- 70,587 of them at this writing.

That was 17,595 more than the 52,992 votes cast there for John Kasich, even though Kasich was an active candidate on March 22 and Rubio had "suspended" his campaign after his defeat in Florida seven days before.

One lesson from this is that it is wacky for Arizona and many other states to allow so much early voting in presidential primaries. The field of candidates can change rapidly, and many voters will be recorded for a candidate they wouldn't have voted for on election day.

The other lesson is relevant to those planning to vote in the 18 Republican primaries and one caucus between now and June 7. And that is that a vote for John Kasich is a vote for Donald Trump.

It's true that if all the Rubio and Kasich voters in Arizona had opted for their second choice, Donald Trump would probably still have come out ahead, since he got 47 percent in his own right and thus would still have won Arizona's 58 winner-take-all delegates.

And it's true that Kasich's 17 percent in the Utah caucuses did not prevent Ted Cruz from exceeding Utah's 50 percent threshold (by a lot: 69 percent) and winning that state's 40 winner-take-all delegates.

But Trump is not polling at anything like the 47 percent level in most states yet to vote. In Wisconsin, which votes April 5, he hasn't topped 30 percent. Yet with the anti-Trump vote split, he could win the lion's share of its delegates, awarded statewide and winner-take-all by congressional district.

That's exactly what happened in Missouri and Illinois on March 15. Trump won 53 of Illinois' 69 delegates with 39 percent, to 30 percent for Cruz, 19 percent for Kasich and 8 percent for Rubio. If Kasich weren't running or if Rubio had urged his voters to vote Cruz, as he urged them to vote Kasich in the latter's Ohio, the totals and the delegate count would have looked very different.

Missouri was even closer, with Trump edging Cruz 40.8 to 40.6 percent. Cruz can be faulted for campaigning elsewhere in the last days, and he did end up with 15 delegates by carrying three of eight congressional districts. But Trump won 37 delegates.

The key here is that Trump must win 1,237 delegates -- which is a majority at the convention, not some arbitrary number as he has suggested -- in order to be nominated. If he falls visibly short of 1,237 it is highly unlikely that he can pick up the delegates necessary to win.

Current delegate counts have Trump at 739, Cruz at 465 and Kasich at 143, with 839 to be selected in states not yet voting. Trump needs about 59 percent of these to win. With divided opposition, he has an excellent chance; many remaining states select delegates winner-take-all statewide or by congressional district. Against Ted Cruz, he has a greater chance of falling short.

Trump has massive unfavorable ratings among general election voters and runs well behind Hillary Clinton in general election polls -- his and his supporters' delusional denials notwithstanding. Cruz runs about even against Clinton. He's not many Republican strategists' idea of an ideal candidate. But he's in competitive territory against a Democrat with major weaknesses of her own.

But few analysts of any stripe think Sanders' numbers would stand up under the scrutiny, not given to him so far, inevitably brought to a candidate who could actually be nominated. There's reason for similar doubts about the durability of Kasich, who has had no significant scrutiny yet.

Kasich has won only one primary, in his home state, and finished second in three more, all in New England. The chances are vanishingly minimal that a convention, once Trump falls short of 1,237, would nominate him for president. But vice president? Maybe -- if, despite Kasich's recent claim that he would never be a running mate, his 143 delegates put Trump over the top. A vote for Kasich is a vote for Trump.