The Shrinkage of the Obama Majority 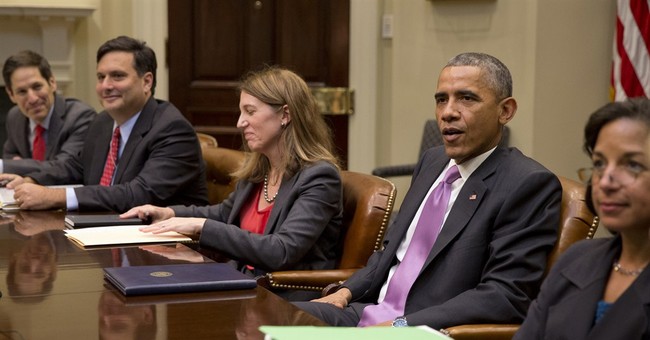 Some observations on the election:

(1) This was a wave, folks. It will be a benchmark for judging waves, for either party, for years.

(2) In seriously contested races, Republican candidates were generally younger, more vigorous, more sunny and optimistic than Democrats. The contrast was sharpest in Colorado and Iowa, which voted twice for President Obama. Cory Gardner and Joni Ernst seemed to be looking forward to the future. Their opponents grimly championed the stale causes of feminists and trial lawyers of the past.

Democrats see themselves as the party of the future. But their policies are antique. The federal minimum wage dates to 1938, equal pay for women to 1963, access to contraceptives to 1965. Raising these issues now is campaign gimmickry, not serious policymaking.

Democratic leading lights have been around a long time. The party's two congressional leaders are in their 70s. The governors of the two largest Democratic states are sons of former governors who won their first statewide elections in 1950 and 1978.

This has implications for 2016. Hillary Clinton, the likely Democratic nominee, worked in her first campaign in 1970. She has been a national figure since 1991. The Clintons' theme song, "Don't Stop Thinking About Tomorrow," was released in 1977. That will be 39 years ago in 2016.

(3) The combination of Obama's low job approval and Harry Reid's virtual shutdown of the Senate insured a Republican Senate majority. Reid prevented amendments -- Mark Begich of Alaska never got to introduce one -- that could have helped them in campaigns.

That left Democrats running for re-election stuck with 95-plus percent Obama voting records. It left them with no independent votes or initiatives to point to. Reid kept Democratic candidates well-stocked with money. But not with winning issues.

(4) Democratic territory has been reduced to the bastions of two core groups -- black voters and gentry liberals. Democrats win New York City and the San Francisco Bay area by overwhelming margins, but are outvoted in almost all the territory in between -- including, this year, Obama's Illinois. Gov. Jerry Brown ran well behind in California's Central Valley, and Gov. Andrew Cuomo lost most of upstate New York.

Democratic margins have shrunk among Hispanics and, almost to the vanishing point, among young voters. Liberal Democrats raised money to "turn Texas blue." But it voted Republican by wider than usual margins this year.

Under Obama, the Democratic base has shrunk numerically and demographically. With superior organization, he was able to stitch together a 51 percent majority in 2012. But like other Democratic majority coalitions -- Woodrow Wilson's, Lyndon Johnson's, even Franklin Roosevelt's -- it has proved to be fragile and subject to fragmentation.

(5) In many states -- including many carried twice by Obama -- Republicans have been governing successfully, at least in the estimation of their voters. Gov. Scott Walker has won his third victory in four years in Wisconsin against the frantic efforts of public employee unions.

Gov. John Kasich won a landslide victory against a flawed opponent in Ohio, and Gov. Rick Snyder won solidly in Michigan after signing a right-to-work law hated by private sector unions. In Florida, Gov. Rick Scott's second consecutive one-point victory means that Republicans will be in control for 20 years in what is now the nation's third-largest state.

Democratic governance, in contrast, was rebuked by the voters in Massachusetts, in Maryland (with the nation's fourth highest black population in percentage terms) and in Obama's home state of Illinois.

(6) The Obama Democrats labor under the illusion that a beleaguered people hunger for an ever-bigger government. The polls and the election results suggest, not so gently, otherwise.

The fiasco of healthcare.gov, the misdeeds of the IRS, the improvisatory warnings of the Centers for Disease Control and Prevention -- all undermine confidence in the capacity of big government. Looking back over the last half-century, the highest levels of trust in government came, interestingly, during the administration of Ronald Reagan.

(7) This election was a repudiation of the big government policies of the Obama Democrats. It was not so much an endorsement of Republicans as it was an invitation to them to come up with better alternative policies.

In the states, some Republicans have. At the national level, they are just getting started. We'll see how they do.