Scots Vote Against Independence, but Controversy Continues in Britain 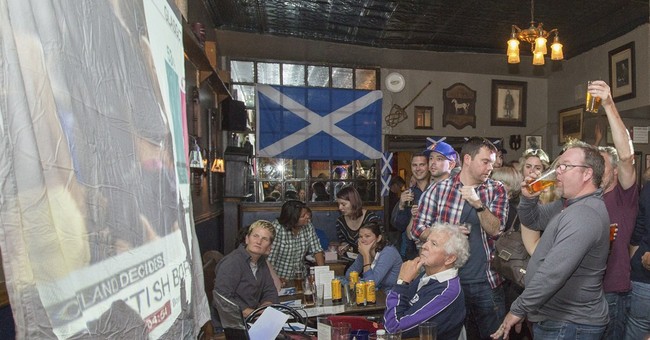 Last week, the voters of Scotland, in a heavy turnout and from age 16 up, decided not to disunite what has been arguably one of the most successful and beneficial nations over the last 307 years, the necessarily clunkily named United Kingdom of Great Britain and Northern Ireland.

It was a relatively close-run thing: 45 percent voted for an independent Scotland, just 383,000 fewer than voted for Scotland to remain part of the now-not-necessary-to-be-renamed UK.

Had Queen Elizabeth II not allowed herself to be overheard telling a churchside crowd that Scottish voters should "think very carefully" about the issue, the result might have been closer, as polling suggested it would be.

Actually, something like panic broke out when, days before, a single poll showed the independence side ahead. The leaders of the three UK parties -- Conservative Prime Minister David Cameron, Labour's Ed Miliband and Liberal Democrat Nick Clegg -- scampered north to Scotland and promised to devolve even more powers from the UK parliament in Westminster to the Scottish Parliament established by Tony Blair's Labour government in 1999.

When the Scottish Nationalist party won a majority in that parliament in 2011, First Minister Alex Salmond immediately pushed for the referendum. With rules that stacked the deck: 16-year-olds could vote, but Scots outside Scotland, including those in the British military, could not.

Scotland's grievance may have been based in nostalgia for Braveheart and the poetry of Bobby Burns. But it was also rooted in opposition to a central government that locals deemed hostile -- something like Texas in President Obama's America or New York in George W. Bush's.

Scotland's once world-dominating heavy industries -- shipbuilding, steel -- were shut down by the 1980s, and many blamed Conservative Prime Minister Margaret Thatcher. Once closely divided between the two major UK parties, Scotland elected exactly one Conservative MP to Parliament in 2010, versus 41 Labourites, 11 Lib Dems and six Scottish Nats.

Salmond painted an alluring picture of an independent Scotland, blessed with North Sea oil wealth and expanding its already large welfare state. But North Sea production is falling and, as Thatcher said, the problem with socialism is that you eventually run out of other people's money.

Nonetheless, Scotland is not the only region that has been eyeing secession. In Spain's Catalonia, centered on Barcelona, the regional parliament is calling for a secession referendum -- which Madrid says is unconstitutional. Italy's Veneto region, like Catalonia and unlike Scotland, more prosperous than its country at large, has supported the secession-minded Northern League.

Americans have a hard time understanding the secessionist impulse. Our own experience with secession resulted in a war that took 600,000 lives in a nation of 38 million. The equivalent death toll today would be 5 million.

And our federal system allows Americans to vote with their feet for states with agreeable public policies. In 1970, my home state of Michigan had 9 million people. In 2010 it had 10 million. In 1970, Texas had 11 million people, and 25 million in 2010.

The United Kingdom has a harder time devolving power and decentralizing public policy because 85 percent of its people live in England. At 7 a.m. the morning after the Scottish referendum's paper ballots were counted, Cameron emerged from No. 10 Downing Street and promised, "Just as Scotland will vote separately in the Scottish Parliament on their issues of tax, spending and welfare, so too England, as well as Wales and Northern Ireland, should be able to vote on these issues."

That raised the issue dubbed "the West Lothian question," in 1977 by Tam Dalyell, a left-wing Scottish Labour MP: How is it fair to let Scottish MP's vote on policies affecting England when English MP's can't vote on the same policies affecting Scotland?

Barring Scottish MP's from voting on England-only issues might make it impossible for Labour to effectively govern the UK. In the current Parliament, Conservatives hold a solid majority of English seats, but they're a minority in the whole Parliament, forced to govern in coalition with the Liberal Democrats.

Could a Scottish Labour MP ever again wield the power that Gordon Brown did as Chancellor of the Exchequer and then Prime Minister over a 13-year span?

Somehow I suspect the British will muddle through. But the lesson seems to be that, in a decentralizing age, it's hard to get the right balance between national unity and regional autonomy.