Are the Two Political Parties About to Crack Up? 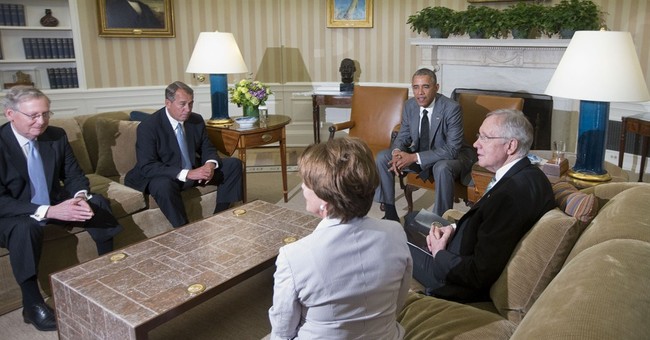 That's in contrast to the relatively stable competition of the last 20 years, when Democrats have won four of six presidential elections and Republicans won House majorities in eight of 10 congressional contests, always by less than landslide margins. The parties' stands on issues have remained familiar from one cycle to the next.

That pattern seems likely to hold this year, with Republicans favored to hold their House majority, and with a better than 50 percent chance of gaining the Senate majority that eluded them in 2010 and 2012.

But the outlook for 2016 is murky, with a stale Hillary Clinton way ahead of other Democrats and a stable of Republicans closely clustered out of the starting gate with no clear leader or perceptible opening.

Congressional Democrats have been bucking the Obama administration on both right and left.

Senate Democrats rejected judicial nominees as insufficiently liberal. They blocked the nomination of an assistant attorney general nominee who supported the appeal of the murderer of a Philadelphia policeman and a surgeon general nominee who tweeted that "guns are a health care issue."

As in 2008, she has apologized for supporting the 2002 Iraq war resolution, and she refused to say whether the Keystone XL pipeline should be approved, even though her State Department report found it environmentally unthreatening.

Clearly Clinton is catering to the antiwar left and to San Francisco hedge-fund billionaire Tom Steyer, who has pledged to spend $100 million to block Keystone.

As the world spins in disarray, she sometimes distances herself from the president she served for four years. She would have aided Syrian rebels, she says, and would not have dropped Egypt's Hosni Mubarak so abruptly. She doesn't quite agree with the Bowe Bergdahl deal.

But she also says the five released Taliban leaders pose no threat to the United States and defended National Security Agency data mining. She squirmed under ABC's Diane Sawyer's questions about Benghazi and NPR's Terry Gross' questions about her late conversion to favor same-sex marriage.

The latest NBC/Wall Street Journal poll shows 55 percent of voters consider her "knowledgeable and experienced," but only 38 percent say she is "honest and straightforward," while 40 percent say she's not. Publishing-world gossip is that her current book's sales lag well behind her 2003 memoir.

Certainly she's not getting the adulation lavished on her in editor Tina Brown's 2011 debut Newsweek cover story celebrating "how she's shattering glass ceilings everywhere!" -- a curious comment for the third female secretary of State. It's hard to be the latest new thing when you've been a major public figure for 22 years.

If Clinton's skittering performance illustrates the splits in the Democratic Party, those in the Republican Party have been glaringly apparent for some time.

They talk of repealing and replacing Obamacare, but don't specifically say how, and present no common front on taxes or entitlements. They blame the sluggish economy, plausibly, on the Obama big-government policies but don't seem anywhere close to proposing specific alternatives.

Republican primary voters have mostly been refraining from nominating dangerously provocative candidates. But their distrust of party leaders was apparent in the surprise defeat of House Majority Leader Eric Cantor.

The perceived failure of Barack Obama's policies is the backdrop here. Polls have shown majority disapproval for the 2009 stimulus package and Obamacare since Obama's first year in office.

And the NBC/WSJ poll is only the latest to show majority disapproval on foreign policy -- and was conducted before the news of collapse in Iraq was fully absorbed.

This has left Clinton with reason to distance herself from Obama even as many Democrats want to move further left. And it has left Republicans with no clear ideas on how to repair the damage at home and abroad.

It's as if both parties are sailing in uncharted waters, with would-be leaders fighting for the tiller.