Obama Follows Polls in Foreign Policy but Public Turns Against Him 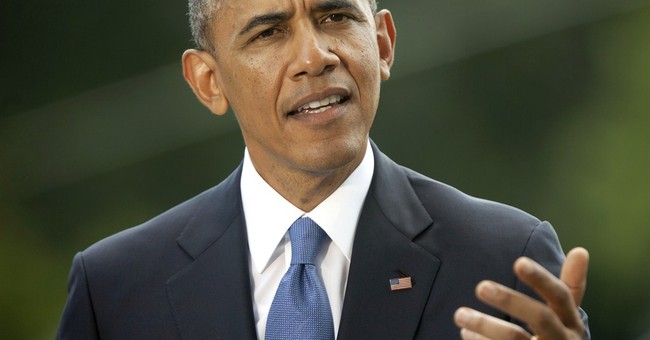 Trending
Polls show that most Americans wanted the United States to withdraw from Iraq. Barack Obama did indeed withdraw U.S. forces from Iraq, not troubling to negotiate a readily negotiable status of forces agreement that would have left a contingent of American soldiers there.

The most recent Pew Research Center poll conducted for the Council on Foreign Relations shows that 52 percent of Americans -- the highest percentage in the last 40 years -- think the U.S. should mind its own business internationally and let other countries get along as best they can on their own. Evidently they don't want to see America being, in the old phrase, the policeman of the world.

Barack Obama seems to be following the polls, yet more and more voters express disapproval of his foreign policy -- 50 percent in a recent Washington Post/ABC News poll, with only 41 percent approving, a new low in that survey.

So what gives? Obama has seemingly given the public what it wants -- including the death of Osama bin Laden. And yet the public is dissatisfied.

Which is an illustration of how public opinion polls can be misleading guides for public officials. Poll respondents tell interviewers (or recorded voices on the phone) what they would like at that moment.

Often on foreign policy that means just being left alone. But history tells us something else about Americans' attitudes.

They have understood, no matter how little they want to be bothered or to see their fellow citizens suffer casualties, that Americans have a stake in what goes on beyond our borders and across the seas.

This has been true from the early days of the republic. Thomas Jefferson sent the Navy and Marines to subdue the Barbary pirates in "the shores of Tripoli." American traders began sailing to China in the early 1800s, and the U.S. Navy had ships on the Yangtze River for nearly 100 years until they were expelled by Japan in the 1930s.

American missionaries spread their faith in China, in the Middle East, in Hawaii long before it was annexed in 1898. Americans did business abroad for years, including a mining engineer named Herbert Hoover who resisted the Boxer Rebellion in Beijing in 1900.

In the 20th century, after two world wars, Americans came to understand that their nation's traditional commercial interest in protecting the sea lanes also served to maintain an international order in which freedom and democracy had a chance to prevail.

What most Americans are saying now, when they voice disapproval of the president's foreign policy, is not that they disagree with this or that decision or action. They are saying that they are seeing a world in disarray.

The disarray is visible, even in the moments one searches for the remote control to switch to a less disquieting channel. Disarray in the murder of a U.S. ambassador in Benghazi, about which only 32 percent in the Post/ABC poll believe the administration has disclosed what it knows.

Disarray in Syria, where chemical weapons are being used by a dictator despite the agreement brokered by Russia. Disarray in Ukraine, in Iraq, in the Far East, with clashes between China and U.S. allies and nuclear weapons in North Korea.

A policy that disrespects friends, relies on the good faith of unfriendly powers and seeks to propitiate enemies tends to result in such disarray. Friends seek other means of self-preservation, unfriendly powers concoct deals that leverage their advantage, and enemies are increasingly confident they can defy the United States.

Americans may have supported most steps along the way. But they recoil at the disarray that tends to predictably result.