The Revolt of the Wingers in British and American Politics 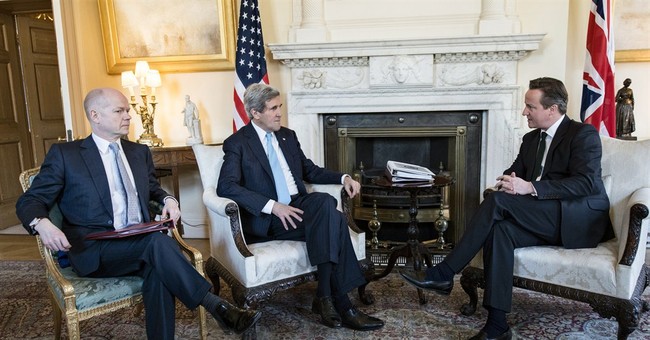 In recent times, British and American politics have often flowed in parallel currents.

Margaret Thatcher's election as prime minister in 1979 was followed by Ronald Reagan's election as president in 1980. As Charles Moore notes in his biography of Thatcher, the two worked together, albeit with some friction, reversing the tide of statism at home and ending the Soviet empire abroad.

They seemed to establish British Conservatives and American Republicans as their nation's natural ruling parties.

But after any party is in power for an extended period, its wingers start to get restive -- rightwing Republicans and Conservatives, leftwing Democrats and Labourites.

They complain that their leaders failed to enact needed changes and betrayed core beliefs. They take their party's past electoral success for granted and push for a return to ideological purity.

An internal rebellion in the Conservative party overthrew Thatcher in December 1990, and the hatreds it inspired festered for years.

Thatcher's successor, John Major, did win another term in May 1992. But he was hectored by Thatcherite true believers more obdurate than Thatcher had been in office. This intraparty civil war raged through three electoral defeats and only subsided after David Cameron was elected party leader in 2005.

In America, anti-tax conservatives rebelled at George H.W. Bush's acceptance of tax increases in 1990, and Reagan speechwriter Pat Buchanan launched a quixotic challenge of Bush in the 1992 primaries.

Then Bill Clinton's successful negotiations with Gingrich caused discontent on the Democratic left. It supported Clinton on impeachment but gave 2.9 million votes to Ralph Nader in 2000, which helped defeat Al Gore.

George W. Bush's bipartisan achievements on education and Medicare and continued spending increases caused distress on the Republican right. It found a voice after he left office in the Tea Party movement, whose anger was directed at "establishment" Republicans as well as at President Obama.

Republican primary voters chose provocative candidates, some of whom lost winnable seats. Only now do primary voters seem to be simmering down and trying to pick general election winners.

Blair's victories came with diminishing percentages and turnout. On the left, there was increasing rage at Blair's support of the Iraq war, and today Blair is virtually a non-person, unmentioned if not reviled, in the party he led. No one follows his example.

After Labour's defeat in 2010, the party rejected as leader the Blairite David Milliband in favor of his brother Ed Milliband, who more faithfully represented the views of their Marxist intellectual father.

Milliband -- "Red Ed" to the Conservative press -- has led his party sharply to the left, backing higher taxes on high earners, a mansion tax on big properties and a freeze on energy prices. He's even considering renationalizing the railroads though privatization has been widely accepted.

Milliband's critics say his strategy is to nail down 35 percent of the vote -- quite possibly enough to win in a nation with competitive minor parties and parliamentary district boundaries that heavily handicap Conservatives.

One answer is that they're acting out of genuine conviction. Another is that circumstances have changed.

Blair and Clinton adapted after their party suffered multiple serious defeats. Today's Labour and Democratic leftists act out of frustration with how their parties have governed.

Party politics tends to attract people of strong beliefs, left and right. Until they get whacked repeatedly by defeat, they'll try to advance them as far as they think they can.